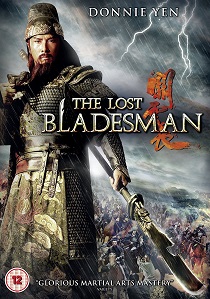 Co-written and co-directed by the duo responsible for the Infernal Affairs trilogy, Alan Mak and Felix Chong and starring Donnie Yen (14 Blades; Bodyguards And Assassins; Ip Man), Jiang Wen (The Founding Of A Republic), Alex Fong (Triple Tap; Once A Gangster) and Sun Li (Fearless), with stunning action choreography by Yen, the film has been described as "an emotionally-charged, high-octane adventure [and] a couple of hours of rip-roaring entertainment in the company of one of history's greatest badasses" (Twitch Film).

Yen stars as the legendary warrior Guan Yun Chang, sworn brother of the great warlord Liu Bei, who, on becoming separated from his friend during the tumultuous warring period of the Three Kingdoms, is taken prisoner by and agrees to fight temporarily alongside Liu Bei's enemy and rival warlord, Cao Cao.

Guan's heroism on the battlefield is rewarded with the title of Marquis of Hanshou and promotion to the rank of lieutenant general in Cao Cao's army. The position allows him the freedom to escort Liu Bei's concubine, Qi Lan, who is being held hostage by Cao Cao, back to her lord and master. But the journey is fraught with danger as Guan and Qi Lan must make their way through a number of mountain passes, all of which are occupied by enemy generals and their armies.

"Glorious martial arts mastery" (Variety) and "impressive vistas and gorgeous scenery" (BeyondHollywood.com) add a visual splendour to a film that is "brimming with action" (Twitch Film) and reaffirms Donnie Yen as one of Eastern cinema's most appealing and enduring action stars.