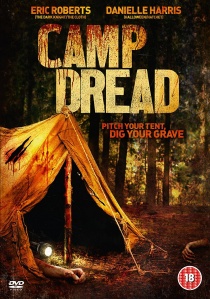 Imagine a reality show where the contestants - a succession of unpleasant characters - are eliminated not by standard ejection but by hanging, drowning, strangling, beheading and all manner of murderous methods. Welcome to Camp Dread, released on DVD on 23rd June 2014, courtesy of Image Entertainment.

A group of misguided young adults - amongst them killers, blackmailers, sex offenders - have been sent to the camp as part of a new reality show. This is their last chance to avoid prison or rehab and if they avoid elimination they could win $1 million along the way.

Manipulating the contestants is down-at-heel horror director Julian Barrett played by Oscar nominee Eric Roberts, using the same set as his old horror franchise Summer Camp. And as the competition progresses, it becomes more than just a battle to win. It's a desperate, gut-wrenching fight for survival.

BD
In The Little Things, released on DVD and Blu-ray 10th May 2021 from Warner Home Video, Kern County Deputy Sheriff Joe "Deke" Deacon is sent to Los Angeles for what should have been a quick evidence ... END_OF_DOCUMENT_TOKEN_TO_BE_REPLACED
Hot PicksView