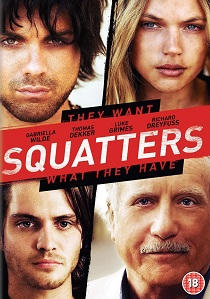 Wealth and glamour clash with youth and poverty in Squatters, a gripping crime thriller debuting on DVD on 26th May 2014 from Sony Pictures Home Entertainment.

The cast is a stellar blend of both accomplished and rising young actors, starring Gabriella Wilde (Endless Summer), Thomas Dekker (A Nightmare on Elm Street), Luke Grimes (TV's True Blood), and Academy Award® winner Richard Dreyfuss (1978, Best Actor, The Goodbye Girl). "All of our young lead actors delivered some amazing performances", lauded director Martin Weisz (The Hills Have Eyes II). "To have such an icon like Richard in our film was simply unforgettable". Set in picturesque Pacific Palisades in Southern California, Squatters is a multi-level story with tension and suspense at every twist.

Squatters was directed and produced by Martin Weisz and written by Justin Shilton. It was produced by Cordula Weisz (Grimm Love), Todd Moyer (George and the Dragon) and Julius R. Nasso (Narc), with Sam Childs as co-producer (TV's Teen Wolf). Executive producer is Frankie Nasso, with Jeffrey P. Kranzdorf (The Courier) and David Belafonte as co-executive producers.

HotDVDBD
From the producers of Nobody and John Wick comes a bare-knuckle, coal-dark holiday action-comedy that says you should always bet on red as Violent Night sledges in on DVD and Blu-ray 6th March 2023 from Warner Home Video. END_OF_DOCUMENT_TOKEN_TO_BE_REPLACED
Top PicksView