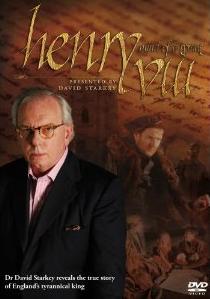 Henry: Mind of A Tyrant

News
News Article Go back to homepage
In a vivid 4-part television biography, the engaging historian Dr David Starkey takes us inside the mind of one of the most infamous rulers of all time as Henry: Mind of A Tyrant is released on DVD from 27th April 2009 from 2entertain.
2entertain
Unknown
27/04/2009
Thank you for supporting DVD365.net when you order using the link(s) below. As an Amazon Associate we earn from qualifying purchases
Buy DVD
Information

When Henry VIII succeeded his father to the thrown of England in 1509 his accession was greeted with wild rejoicing. Yet, when Henry died 38 years later, he had gained a reputation as a bloodstained tyrant, a man who wielded the axe against friend, foe and family alike.He was feared as few English kings have been, yet he was also respected as "Henry the Great", the monarch who had transformed his realm from a continental appendage to a world power.

In this vivid 4-part television biography, the engaging historian Dr David Starkey (Monarchy) takes us inside the mind of one of the most infamous rulers of all time. Coinciding with the 500th anniversary of Henry's accession, Henry: Mind of A Tyrant is released on DVD from 27th April 2009.

No one is better placed to get inside Henry's head than David Starkey. David has been fascinated by Henry since he was an undergraduate. Acknowledged as the world's leading authority on the Tudor court, he is now writing the definitive biography of Henry VIII. Follow David as he travels Europe to piece together Henry's real story and reveal the flesh-and-blood man behind the Tudor legend. Henry's highly-charged erotic letters to his lovers, star-struck notes to his childhood heroes, paintings and manuscripts offer an unprecedented insight into the mind of the king, revealing the driving forces behind his actions, and telling the story of his reign from his own perspective.

To bring this dramatic story to life, key scenes have been re-created with historical characters from Henry himself to other protagonists such as Anne Boleyn, Thomas More and Pope Clement, presented as genuine flesh-and-blood characters.

Look beyond the myths and stereotypes surrounding Henry VIII and re-examine your perceptions of the great Tudor monarch in Henry: Mind of A Tyrant.

DVD
For the first time in the cinematic history of Spider-Man, our friendly neighborhood hero's identity is revealed in Spider-Man: No Way Home, released on DVD, Blu-ray and 4K UHD 4th April 2022 from Sony Pictures Home ... END_OF_DOCUMENT_TOKEN_TO_BE_REPLACED
Top PicksView