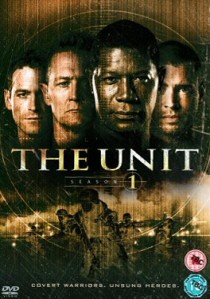 Action drama The Unit uncovers the secret world of military intelligence where a covert team of Special Forces Operatives risk their lives to safeguard national security.

From the producers of The Shield and based on the novel, Inside Delta Force by author and ex-Special Forces Operator Eric L. Haney, The Unit features a stellar cast including former 24 star, Dennis Haysbert (President David Palmer), Robert Patrick, and Scott Foley.

The first series of The Unit explodes onto DVD on 30th April 2007 from Twentieth Century Fox Home Entertainment (RRP: £34.99). The Unit season 1 follows Jonas Blane (Haysbert, 24, Jarhead) as he leads his elite counter-terrorism team on missions in far-flung locations, only reporting to one man - the President.

So secret is The Unit that the Army and FBI deny the team exist. As Colonel Tom Ryan (Patrick, Johnny Cash, The Terminator 2) sends the men on their missions, Blane is given the responsibility of settling in new recruit Bob Brown (Foley, Felicity, Scrubs) and his first mission is to defuse a hostage situation aboard a plane. No other Commando on Earth is as deadly as a Special Forces Operative. An expert on explosives, espionage, and languages, his skills in tracking, skiing and parachuting are world-class - he is a true survivor!

Back on base, the wives battle with the fear and uncertainty that their husbands may not return from their missions. Having become accustomed to living in a covert world, Blane's wife, Molly (Regina Taylor, The Negotiator, Courage Under Fire) helps Brown's wife, Kim (Audrey Marie Anderson) adapt to her new secret life.

David Mamet (The Verdict, Ronin) adapted Inside Delta Force into the screenplay, The Unit, by playing on Haney's first hand knowledge and eight years' experience in a Special Forces team. They are the elite. They have no rules or regrets. They are The Unit. Own it on DVD from 30th April 2007.

HotDVDBDDIGITAL
With stunning revelations, glamorous journeys, and the arrival of the Jazz Age, Downton Abbey: A New Era, released on DVD and Blu-ray 15th August 2022 from Warner Home Video, will be the Crawleys' biggest adventure yet as they grapple with their future and new intrigue about ... END_OF_DOCUMENT_TOKEN_TO_BE_REPLACED
Top PicksView