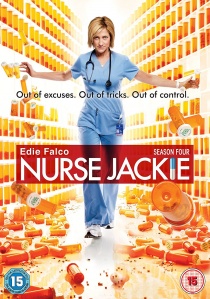 Jackie Peyton (Edie Falco - The Sopranos) stars as the rule-bending Nurse in a busy US hospital. Nurse Jackie is a pill-popping, rule-bending medical renegade, dishing out her own brand of justice on the wards... any of her colleagues that get in the way better watch out. Season 4 gives us another addictive dark comedy, on DVD and Blu-ray on 25th February 2013, courtesy of Lionsgate Home Entertainment.

Nurse Jackie Season 4 stars Emmy Award®-winning actress Edie Falco as Jackie Peyton, a brilliant - but very flawed - emergency room nurse. This season, Jackie comes to realize that both karma and sobriety can be a b***h. In addition to finally confronting her addiction, Jackie's street smarts and sardonic wit are tested even further by an ambitious new hospital administrator (Bobby Cannavale), who's determined to run a tight ship and keep Jackie in line.

Also starring Peter Facinelli (The Twilight Saga), the series is rich with darkly comic stories and riveting performances. The cast play their wonderfully observed characters to perfection in this 'INSANELY GOOD' (Grazia) comedy drama. Get another fix!

HotUHD
StudioCanal is thrilled to announce that the iconic cult classic, Highlander, is being released to own on 4K UHD for the very first time 31st October 2022 with brand-new artwork from celebrated artist Matt Ferguson. END_OF_DOCUMENT_TOKEN_TO_BE_REPLACED
Top PicksView