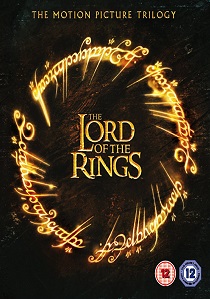 News
News Article Go back to homepage
Oscar®-winning The Lord of the Rings Trilogy, one of the most magical, intensely spectacular epic adventures in motion picture history, can now be seen as never before when all three of Peter Jackson's visual masterpieces explode onto Blu-ray Disc 6th April 2010 as The Lord of the Rings: The Motion Picture Trilogy.
Entertainment in Video
Unknown
06/04/2010
Thank you for supporting DVD365.net when you order using the link(s) below. As an Amazon Associate we earn from qualifying purchases
Buy BD
Information

Oscar®-winning The Lord of the Rings Trilogy, one of the most magical, intensely spectacular epic adventures in motion picture history, can now be seen as never before when all three of Peter Jackson's visual masterpieces explode onto Blu-ray Disc 6th April 2010 as The Lord of the Rings: The Motion Picture Trilogy. The nine-disc set will reawaken the powerful connection that fans have to these films through rich, robust colours and crisp sound that home audiences can only experience on Blu-ray Disc.

The Lord of the Rings, the highest grossing adventure film franchise to ever be created, was born with the release of The Fellowship of the Ring, followed by The Two Towers and The Return of the King. The multi-billion dollar franchise is expected to grow significantly as The Lord of the Rings: The Motion Picture Trilogy brings together all three treasured films on Blu-ray Disc for the very first time, presented for home audiences the way they were meant to be seen.

The Trilogy's Blu-ray release captures the enduring Fellowship and ultimate sacrifice while enhancing the chaos and destruction of Middle-earth, delivering a visual feast that will not soon, if ever, find its equal. Of the 30 total Academy Award nominations the three The Lord of the Rings movies received, they won a record 17 Academy Awards®, including Best Picture, Best Director, Best Adapted Screenplay and 8 others for the third film.

Based on the best-selling novels by J.R.R. Tolkien, Jackson's movie trilogy is an epic journey of men, hobbits, elves, dwarves and the rest of Middle-earth's creatures and cultures. The films chronicle the struggle of good versus evil with fantastic special effects and a strong emotional centre. The Lord of the Rings: The Motion Picture Trilogy contains the original theatrical versions of the three films on Blu-ray Disc, with more than seven hours of special features. The Trilogy will be packaged in multi-disc elite packaging inside a premium rigid slipcase and will retail for £74.99 RRP. Extended versions of the films will be released at a later date on Blu-ray Disc.

About the Trilogy and the Films

The Lord of the Rings Trilogy tells the story of Frodo Baggins (Elijah Wood), a hobbit who battles against the Dark Lord Sauron to save his world, Middle-earth, from the grip of evil. In the films, Frodo and his fellowship of friends and allies embark on a desperate journey to rid Middle-earth of the source of Sauron's greatest strength, the One Ring -- a ring that has the power to enslave the inhabitants of Middle-earth. The trilogy tells tales of extraordinary adventures across the treacherous landscape of Middle-earth and reveals how the power of friendship, love and courage can hold the forces of darkness at bay. Beside Wood, the films star Ian McKellen, Liv Tyler, Viggo Mortensen, Sean Astin, Cate Blanchett, John Rhys-Davies, Billy Boyd, Dominic Monaghan, Orlando Bloom, Christopher Lee, Hugo Weaving, featuring Sean Bean, and Ian Holm, with Andy Serkis as Gollum. The films also star Marton Csokas, Craig Parker and Lawrence Makaoare.

The Lord of the Rings: The Fellowship of the Ring In this first part of the Trilogy, the young hobbit Frodo Baggins inherits a ring; but this ring is no mere trinket. It is the One Ring, an instrument of absolute power that could allow Sauron, the dark Lord of Mordor, to rule Middle-earth and enslave its peoples. Frodo, together with a Fellowship that includes his loyal hobbit friends, humans, a wizard, a dwarf and an elf, must take the One Ring across Middle-earth to Mount Doom, where it first was forged, and destroy it forever. Such a journey means venturing deep into territory manned by Sauron, where he is amassing his army of Orcs. And it is not only external evils that the Fellowship must combat, but also internal dissension and the corrupting influence of the One Ring itself. The course of future history is entwined with the fate of the Fellowship. The film won four Oscars® for Best Visual Effects, Cinematography, Makeup and Original Score.

The Lord of the Rings: The Two Towers In their parallel journeys, the Fellowship will stand against the powerful forces spreading from the Two Towers -- Orthanc Tower in Isengard, where Saruman has bred a lethal army of 10,000 strong; and Sauron's fortress at Barad-dûr, deep within the dark lands of Mordor. The Lord of the Rings: The Two Towers culminates in the astonishing battle for the refuge, Helm's Deep, the Kingdom of Rohan's ancient large stone fortress, besieged by Uruk-hai warriors. The film won two Oscars: Best Sound Editing and Best Visual Effects.

Lord of the Rings: The Return of the King The final battle for Middle-earth begins. Frodo and Sam (Sean Astin), led by the mysterious Gollum (Andy Serkis), continue their dangerous mission toward the fires of Mount Doom in order to destroy the One Ring. Aragorn (Viggo Mortensen) struggles to fulfil his legacy as he leads his outnumbered followers against the growing power of the Dark Lord Sauron, so that the Ring-bearer may complete his quest. The film, which won Academy Awards® in all 11 categories for which it was nominated, took wins for Best Picture, Director, Editing, Art Direction, Costume Design, Visual Effects, Makeup, Adapted Screenplay, Sound Mixing, Original Song and Original Score.