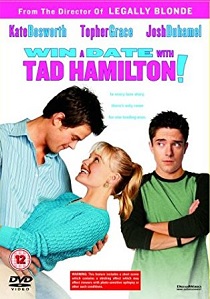 ReviewComedyRomance
Review Article Go back to homepage
When Hollywood heartthrob, and all round nice guy, Tad Hamilton is captured by the press being anything but nice, his agents attempt to salvage his image by dreaming up a competition where one lucky contestant will win a date with Tad.
Kate Bosworth, Topher Grace, Josh Duhamel, Ginnifer Goodwin, Nathan Lane, Sean Hayes, Gary Cole, Kathryn Hahn, Octavia Spencer
Comedy, Romance
2
1 Hour 32 Minutes
Thank you for supporting DVD365.net when you order using the link(s) below.
Buy DVD
Story

When Hollywood film heartthrob Tad Hamilton is caught by the paparazzi drinking, driving, smoking, leering and groping all at the same time, his agents are worried that his boy next door image may be permanently tarnished by this new and shocking image. So what better way to generate some positive public relations, and secure that role in the latest big budget Jimmy Ing movie, than by running a competition to win a dream date with Tad, and help save some malnourished children too. With the paparazzi invited to follow Tad and the lucky winner around Hollywood, there's no easier way to get back into their good books. It's going to be like taking candy from a baby.

So when West Virginia grocery clerk, and major Tad Hamilton fan, Rosalee Futch sees the competition on the internet for an all expenses paid trip to Los Angeles, it doesn't take her long to rustle up some help in order for her raise the $50 competition entry fee. So it comes as a bit of a shock to the system when, much to the annoyance of Rosalee's friend Pete, Rosalee wins the competition and she's sent on her dream date with Tad. With both Tad and Rosalee unsure of what to expect from the date, Rosalee is naturally the more nervous of the two. However, once her nerves settle the "date" is a great success with Rosalee's wholesome goodness leaving a great impression on Tad.

With Rosalee back home Tad soon realises that there is something missing from his life and he longs to get away from his superficial Hollywood life. So returned back to her normal life with only her memories to call upon, Rosalee is rather shocked to discover that the one and only Tad Hamilton has decided to pay her visit at the Piggly Wiggly supermarket and vows not to leave town until he's sorted his life out. However, her closest friend, Pete, is far from happy as he'd been hopelessly, and secretly, in love with her for years. With a new man in her life, will our small town David be able to beat the big time Hollywood Goliath and his fleet of fast cars and private jets?

For such a recent theatrical release there should be no excuses for a poor DVD transfer. Fortunately, there are no such problems with what is a clear and pristine print with an average bit-rate. The colours are rich and vibrant with a good level of detail whilst the night time scenes offer some excellent black levels with no signs of artifacting or outlining. During some of the longer panning shots grain could be a bit of a problem, but since these types of shots are far and few between, it really isn't much of an issue to be concerned about. Still, Win a Date With Tad Hamilton was never going to tax a DVD encoder too much so the results here are more than satisfactory.

Although the genre of the film doesn't really require a hugely dynamic soundtrack with masses of activity in the surround channel, it would have been nice for the 448Kbps Dolby Digital soundtrack to have some activity in the rears. It's a great shame really as there were plenty of opportunities for using the rears for ambient effects. But whilst the rear channel remained embarrassing silent, with only the occasional hint of activity from the musical score and sporadic ambient effect, the front channels were a much better effort with some clear and precise dialogue in the centre and some reasonable stereo steerage at the front.

The menu system is reasonably animated and scored and once you've navigated your way past the language selection and the usual copyright warnings you're greeted with a book like menu with cut scenes from the film. The extras are a bit of a mixed bunch, but as with most things there is always the occasional diamond to be found.

In this case it is in the Deleted Scenes section. Running for just over 20 minutes the majority of the scenes were probably cut for timing purposes, and good decisions the majority were too, but the scenes containing Sean Hayes (Jack in in TV's Will and Grace) are just a scream. I've never really been a fan of his sit-com, but his comedy timing in these scenes are just wonderful and they are a great loss to the film. There's also a deleted scene with limelight seeking daddies little rich girl Paris Hilton plus a rather naff alternate opening and ending which goes to prove that test audiences do, on occasions, prove their worth and get things changed. Still, nice to see them on show here.

However, the rest of the extras disappoint. The Gag Reel is poor and contains nearly ten minutes of unfunny outtakes of people messing about and making strange noises. If anything, this collection of clips also goes someway towards proving the point of this film. Things are rounded off with the ultimate in padding material - the Photo Gallery. I can never understand the point of these as I can make my own gallery by simply using the Pause button on the remote.

As with most romantic comedies it doesn't take an expert to work out a target audience, and in this case Win a Date With Tad Hamilton is aimed straight at a teenage female audience who'll instantly bond with the film characters and reach for the tissues on cue. Never the less, for all its sugar and sweetness there is certainly a darker undercurrent and a sideways swipe at the Hollywood lifestyle and its many insanely rich and famous stars.

Although it is the films intention to poke fun at Hollyood with cliché after cliché, the opening five minutes stereotypes this film perfectly. Our male 'hero' Pete sits in a cinema with two of his female friends watching the latest romance film from Hollywood heart throb Tad Hamilton. As the film concludes both his female companions turn on the water works and reach for the tissues whilst Pete shrugs his shoulders and starts complaining about how everyone lives happily ever after. This is the exact same conclusion a female and male viewer would make of this film. The girlfriend would be happy whilst the boyfriend would be grumbling that Pete was a total loser and that they should have watched Night Stalker 49 instead.

With an audience identified the rather disappointing selection of extras does tend to speak for itself. Whilst I don't want to stir up any more stereotypical views about teenage girls and their viewing habits, I'm sure that the vast majority viewing this disc wouldn't be that interested in an audio commentary or even a behind the scenes featurette. As a result, the rest of us may find that this disc has been somewhat hindered in the all important added value department. Mind you, extras or not, I'm sure that its target audience will ensure that Win a Date With Tad Hamilton will still fly off the shelves.