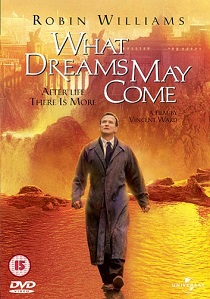 ReviewFantasy
Review Article Go back to homepage
When Chris Neilson is killed in a car accident he discovers that his heaven in within one his wife's paintings. Yet despite this paradise he is lost without his wife, and she without him, so she attempts to join him by taking her own life.
Robin Williams, Cuba Gooding Jr., Annabella Sciorra, Max von Sydow, Jessica Brooks Grant, Josh Paddock, Rosalind Chao
Fantasy
2
1 Hour 48 Minutes
Thank you for supporting DVD365.net when you order using the link(s) below.
Buy DVD
Story

Dr. Chris Nielsen meets his perfect soul mate Annie and they end up marrying and having two wonderful children. Tragically the children are killed in a car accident and Chris and Annie find it hard to come with the deaths and continue with their lives. Things get even worse for Annie when, whilst helping victims of a car accident, Chris is killed and Annie is left totally devastated by her loss.

Ending up in heaven, Chris discovers that heaven is more amazing than he could have ever dreamed of. Guided by a guardian angel called Albert, he finds himself in one of Annie's paintings and reunited with his pet dog. Chris is happy enough in his world until he realises that he desperately misses Annie and that he could now see his children again. With the help of Albert he is finally reunited with his children and he is now only missing the one person in his life he loves the most - Annie.

However, Annie has become so depressed she has taken her life but, rather than joining him in heaven, she goes to hell where she is doomed to spend eternity. When Chris discovers that she has committed suicide he enlists the help of a special soul tracker. Together they travel into the depths of hell knowing that if Chris fails he risks joining her.

This is a visually stunning film. The painting effects of heaven are brilliant whilst hell is an endless sea of groaning faces. The colours are rich and vibrant with no artifacting and an above average bit-rate throughout. The dark and barren colours of hell contrast superbly against the spender of Chris's heaven.

With the film being mainly dialogue based there is not much use of the surround channels. However, during the decent into to hell there are plenty of groans and other creepy atmospheric sounds which manage to raise the hairs on the back of the neck.

Unfortunately, this is a film that if you've seen the trailer then you've seen most of the best bits. It is also very predictable and over sentimental. Robin Williams is not really the man for such a serious role dealing with death as he never really manages to escape from is funny man image. I got the feeling that he was desperately trying, and occasionally failing, not to spurt out funny lines or pull silly faces.