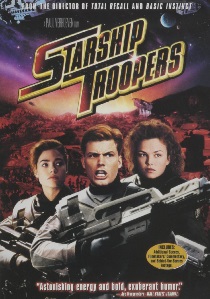 This big budget "B" movie was panned by a lot of critics saying it had no plot, but for my mind, that's not what the film is about. Set in the future, it appears that if you want a vote, you've got to go off and fight the aliens, if you come back alive...Here's your vote thank you very much.

The plot revolves around five soldiers who leave school to join up and fight the insect menace. One disappointment for me was that there is no explanation where earth got its technology from. There was a rumour going around that Verhoven was going to release a directors cut with this information in it, but unfortunately its not happened.

Although this film is relatively old, its still for me a benchmark in DVD quality. The picture quality is nothing short of brilliant, again CGI is seamlessly integrated into the picture, and for my mind ranks among the best I have ever seen.

Sound wise, things are even better. The surround channels are at times given a very severe workout, dramatic music overlaid with some excellent special effects. One scene which really catches the ear (ahem) is when the "troopers" are walking through a valley. The communications officer is asked to go to higher ground to get a better signal....Unfortunately for him, he's grabbed by a flying insect which zooms around the valley along with some excellent whooshing effects which follow the insects movements across the speakers...Both front AND rear.

If you want a no-brains, Sci-Fi blockbuster with a superb picture and some great use of surround, look no further.