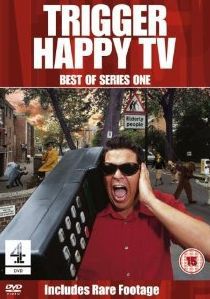 Whilst UK television channel, channel four, have been known to show some real home grown rubbish over the years they have occasionally managed to pull a few gems from their hat. One such gem is Trigger Happy TV, a series of short bizarre sketches involving a hidden camera and an unaware British public and equally gullible tourists.

His many characters include a traffic warden who stops people and then warns them for parking on double yellow lines, a secret agent who sits next to people on park benches and gives them a cryptic message before sliding the surprised person a suitcase, and a park warden who accuses old people of break dancing and pushing people in the lake.

However, the best character must the annoying man with the giant phone who stands up in all sorts of places and shouts at the top of his voice down the phone and scaring the people all around him. It all has an essence of London street theatre about it and its side splittingly funny, especially after a few beers to loosen the old laughing bags.

For a television series the picture is surprisingly bright and colourful with plenty of detail. Whilst it is quite obviously it looks like television broadcast material it certainly looks good on DVD with no signs of artifacting or outlining. This is all the more special when you consider the small budget which the whole series must have been filmed on.

The stereo soundtrack is nothing special, but for a low budget television series this is to be expected. However, rather than being totally ruined by that extremely annoying "canned" laughter, all of the sketches are accompanied by some great music. Indeed, the music in the series was so good they even released a soundtrack CD including such artists such as The Stereophonics, The Happy Mondays and Elastica.

The menu is pleasantly animated and scored with the catchy theme music from the series. Being titled as a "best of" you would hardly be surprised to learn that the entire series is not on the disc. However, they have certainly selected the best parts of the show and there's some additional footage in the form of archive material when Dom Joly entered a UK election as a teddy bear.

I'm not sure if Trigger Happy TV has found its way outside of the UK, but if you have a multi-region DVD player and fancy a good laugh then you should definitely consider investing in this disc. It's a real hoot.