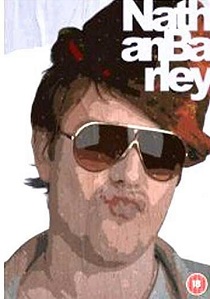 ReviewTV SeriesComedy
Review Article Go back to homepage
Nathan Barley is the Webmaster of www.trashbat.co.ck and the epitome of urban cool and, as such, secretly terrified he might not be. Join us as we follow his bizarre life.
Nicholas Burns, Julian Barratt, Claire Keelan, Ben Whishaw, Richard Ayoade, Spencer Brown, Charlie Condou, Nina Sosanya, Rhys Thomas, Noel Fielding, David Hoyle
Comedy, Television
2
2 Hours 24 Minutes
Thank you for supporting DVD365.net when you order using the link(s) below.
Buy DVD
Story

Nathan Barley is the Webmaster of www.trashbat.co.ck, guerrilla filmmaker, screenwriter, DJ and in his own words, a "self-facilitating media node". He is convinced he is the epitome of urban cool and is therefore secretly terrified he might not be. However, to ensure his urban images is not tarnished he always reads Sugar Ape Magazine - his bible of all things cool. He also always seems to have a bottomless pit of money, picks on Pingu, his web designer, and owns an amazing Wasp T-12 phone which boasts Full fidelity vox phoning, Voice authority enhancement, TV-cast hijack capability, a text insult dictionary and foldout MP3 decks. Oh, it also prints business cards. Every idiot should own one!

Dan Ashcroft is considered to be astonishingly cool, but only by those he despises - and there's plenty of those. He writes a column for Nathan's favourite magazine and his latest article, The Rise of the Idiots, has been well and truly taken in by the people it's aimed at. Dan is surrounded by a bunch of complete idiots (his inspiration for the article) and he is practically worshipped by Nathan (who he considers to be their king of idiots). He is much in demand, with Weekend on Sunday Magazine and their dull and glossy stories showing an interest, but there's idiots on every corner to block his way to a better life.

Claire Ashcroft is Dan's put upon sister. Like Dan she despises "cool", but she's yet to have the pleasure of meeting Nathan. And just like him, she is a film-maker, only better. However, Clair is struggling to make ends meet, plus there's the small problem of trying to sleep whilst her DJ flat mate is on the mixing decks at 2am in the morning at full volume. She's also having a great deal of trouble getting the necessary funding for her hard-hitting film about a choir of reformed junkies. But never fear, Nathan and his urban cool style is here to help... or hinder.

Nathan, Dan and Claire work in the industrial conversions of Hosegate and they are all about to become spliced together in a rather unfortunate three way split. Thanks to the repossession of her equipment due to Dan's unpaid video fine, Claire no longer listens to Dan. However, this is a bit of a shame as Dan is the best person to warn her about the idiot Nathan. Claire is right about Dan, Dan is right about Nathan whilst Nathan is just, well, very wrong. Oh, and he's an absolute tool, but I guess you've already worked this out. It all sounds like an interesting mix for a television series.

The picture is of a reasonable quality with a good range of colours, but given that its origins is terrestrial television, the picture does suffer from a little too much contrast. However, this does look like a deliberate ploy which ultimately ends up with a slightly soft picture which is accompanied by a fair amount of grain. The black levels are reasonably solid throughout whilst the transfer is clean and relatively free from signs of artifacting or outlining. The programme also uses a lot of hand held camera work and as a result produces quite a few shaky scenes. Best not to watch after a busy night on the town then.

Due to the bandwidth limitations of a terrestrial television broadcast, and no doubt some heavy budget restraints, there is very little to expected from the sound department. Still, the 192Kbps two channel Dolby Digital soundtrack is more than sufficient for its needs. The dialogue is crisp and clear whilst the musical score, although lacking the depth of a full blown 5.1 soundtrack, is surprisingly effective throughout with some good bass tracks to get your feet tapping. Whilst there are a few benefits in feeding the audio through a surround system, you can save yourself a pounds worth of electricity by dispensing with the surround system and, assuming you have them, using the speakers in your television/projection system instead.

The menu system is imaginatively designed with the main menu consisting of Nathan riding or walking around the streets to some thumping, and rather good, music and generally yelling at the passers-by to visit his website and stealing chocolates from a newsagent. (I'm not sure if this was a setup, but there's plenty of evidence for a conviction here!). However, clever menu or not, it's actually quite a hard menu to navigate through as you have to select the required option from the menu on his Wasp T-12 phone as it scrolls through the various options before having to do it yet again on the next menu display. You also have to press the Menu button to revert to the previous menu.

Extras wise, there's a good collection on offer and fans of the show are sure to be happy with what's on offer. And in true Chris Morris style, some of the extras are as equally bizarre as the programme itself. The main extra is the forty-five minute Non-Transmittable Pilot Episode. It's essentially the whole series in one go with all of the best bits from the pilot taken out and used in the series to some degree or another. It's also a little darker than the series with both Dan and Claire being particularly less tolerant of all the idiots around them whilst Pingu is a bit less of an idiot. It's also easy to why the pilot has been labeled as "Non-Transmittable" with it crossing that line that the series already runs so very close to.

The Sound section starts off with an Alternate Re-Dub of Episode Five of the series This is a bit of a bizarre extra, but an interesting and amusing one to watch. For some completely odd reason, Dan, Nathan and the drug addicted character Mandy all have their voices changed. Nathan has been redubbed as being rather smooth and posh, Dan sounds Northern, whilst Mandy is as equally posh as Dan. Although it's completely pointless, it's actually been dubbed very well and there's little actually very little to tell between the real and the alternate version. Also in the sound section are two five and three minute Trashbat FM sections where Nathan and his pals generally talking a load of rubbish and get high, and all with the aid of some Windows Media Player style graphics in the background. Pretty pointless really.

The Visual section kicks off with ten minutes worth of Deleted Scenes. The six scenes Weekend on Sunday - Dan Take One, Rocket/Lennon Interview, Chipes at Sugar Ape, Call Me Bad Names, Jonatton 13 Interview and Jonatton Street Exension are essentially extensions to the existing footage used in the series and, apart from one, each only runs for a minute. However, the first deleted scene with Dan runs for around five minutes and is the best of the bunch as he squirms his way through an interview. There's also six thirty second Trailers for the series. Needless to say, if you knew little or nothing about the programme then these trailers aren't going to make you any the wiser.

Next up is the Stills Gallery which contains about six minutes worth of automatically advancing images from the programme set to music. This is essentially all the weird and wonderful advertising posters, Sugar Ape Magazine covers and other PR stuff. And if you like any of these images you can also pop your DVD into your PC and download some or all of the images to your computer. Mind you, quite why you'd want some of this images as your desktop is a bit of a mystery, although the picture of David Bowie peeing into a toaster might be an interesting one to put on your bosses desktop! Also included is a Text Archive of the origins of Nathan Barley which, running at forty pages, is a bit heavy going at times but still an amusing read, as is the accompanying paper booklet which also includes a number of the gallery images.

As is usual, Channel 4 has provided the airwaves, and the commendable guts, to show an extremely unusual television series. And to be fair, when the preview DVD dropped on my doormat I had absolutely no idea who or what this Nathan Barley series was all about. Matters weren't helped much by starting to review the disc by watching the Pilot Episode from the extras section. I wasn't impressed, but that was until I decided to do my reviewing duty and watch the first episode on the disc. Six back-to-back episodes later, I was impressed with the laugh out loud hilarity of this series and it's wonderful satirical look at the media, with the press in particular coming into the laser sights of Chris Morris.

However, there's one thing for sure. With this amount of satire, Chris Morris is by no means a fan of the media. Mind you, given that he's using the medium of television to put his message across, it all seems a little hypocritical to say the least, even more so when he's probably the first in the queue to cash his pay cheque. Still, whilst fans of his deeply cutting, but brilliantly written, Brass Eye and The Day Today programmes may not find it as funny as his other series, I'm sure that Nathan Barley will attract a new set of fans.

With some wonderful extras, a superbly and original (but slightly confusing) menu system, fans of the television series are sure to be whopping with delight over this release. Even if you have no idea about Nathan Barley, if you're a fan of satirical comedy then you really should pick up a copy of this disc. You won't regret it. It's just a pity that there's no audio commentary to accompany the episodes. Now that would have really been the icing on an already impressive cake. Highly recommended.