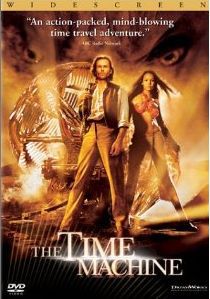 Alexander Hartdegen is a scientist, and a good one at that, living in New York at the turn of the 20th century. His many theories shock his friends and fellow scientists with his ideas ranging from time travel to using radio waves to cook food in minutes. I mean, who would want such a device in the kitchen as women would have far too much free time on their hands to know what to do with!

When his beloved girlfriend is murdered in a robbery during his marriage proposal he decides to prove that time travel is possible and change the events leading up to her death. Working for months on his theories he finally manages to succeed and plans to go back in time to prevent the murder from occurring. Although Alexander manages to prevent her murder she is still destined to die.

Determined to find out why he can't change the past he decides to head for the future and New York in 2030. He is naturally surprised by the future and its technology but he cannot get the answer he desires from this time frame. Heading further into the future he discovers that man has made a fatal technological mistake with a devastating impact on the planet. The resultant shock on his machine causes him to be sent 800,000 years into the future where mankind has evolved into two separate species; the peaceful Eloi and the cannibalistic Morlocks.

The picture is bright and colourful with large amount of detail and above average bit-rate throughout the film. The many CGI effects and scenery blend in perfectly with their surroundings and there's no sign of any artifacting or outlining. The picture holds up well throughout the film, especially during the dark and gloomy underground scenes. I'm also assuming that the slightly orange tinge to the picture is deliberate to give the film that aged look for the time period.

No science fiction film would be complete without plenty of sound effects and this film doesn't disappoint with plenty to keep the action junkie happy. There are some excellent effects in the rear surround channels and they hardly ever remain silent throughout the film. There's some well placed general ambient effects and this is certainly evident during the Morlock attack and subsequent journey into their lair.

Once the time machine starts up then so does the LFE channel with some great plaster removing effects. The dialogue is also crisp and precise in the front channels with some excellent stereo steerage without any bleeding to the other channels. There is the choice of either Dolby Digital or DTS soundtracks with the DTS having the slight edge with its better separation.

The menu is pleasantly animated and scored with some haunting music. Whenever an option is selected from the menu it hurtles through time to the appropriate menu. The only annoying feature of the menu system is the fact that each menu item remains hidden until the cursor moves to it. Perhaps this is a subtle reference to an unknown future, or it may just be down to the fact that it is just plain annoying.

The extras are reasonable above with a couple of Making Of documentaries including a general making of and a separate one on creating the rather bizarre looking Morlocks. Evolution certainly took a sharp left hand turn when it came to them. Also included is an Alternative Introduction and a reasonable Directors Commentary. It's all rounded off with the usual set of Theatrical Trailers.

With the film based on the classic sci-fi novel by H.G. Wells there are plenty of similarities between both the book and the visuals of the original film. Although I wouldn't say that this version is better than the original film, but the fact that the special effects are vastly improved over the original will make it appeal to a newer generation of viewers, and hopefully keep the brilliance of H.G Wells alive.