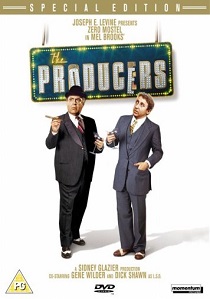 ReviewComedyMusic
Review Article Go back to homepage
A down on his luck Broadway producer hooks up with a hapless accountant in a get rich quick scheme to create the worst musical of all time.
Zero Mostel, Gene Wilder, Kenneth Mars, Renée Taylor, Christopher Hewett, Lee Meredith, Andréas Voutsinas, David Patch, Dick Shawn, Barney Martin
Comedy, Music
2
1 Hour 24 Minutes
Thank you for supporting DVD365.net when you order using the link(s) below.
Buy DVD
Story

Broadway producer Max Bialystock is down on his luck. Once renowned for his successful Broadway musicals he is left fighting for scraps by seducing money out of old ladies as backing for his non-existent plays. Naturally, his musicals are always called "Cash" so it is perfectly normal for his cheques to be made out to the name of the forthcoming musical production. But when Leo Bloom, his hapless accountant, shows up at the office for his yearly audit, Leo inadvertently plants a brilliant money making plan in Max's mind by creating a musical that Broadway will want to forget.

Convinced that a total flop will make them more money than a Broadway hit, Biaystock and Bloom begin their search to find a musical of such bad taste that it will close on the first night. After burning the midnight oil the pair come across Franz Liebkind's rather obscure Springtime for Hitler, a musical so bad it is bound to fail. But in order for their plan to work, Max needs some financial backing so he his forced to return to what he does best - conning old ladies out of rather large amounts of money.

With the vast finances in place, a plush new office, an attractive dancing secretary (with not much secretarial skills) and Rolls Royce parked outside, Max and Leo now just need an art director and cast. So who better than the wacky cross dressing art director Roger De Bris and the spaced out Lorenzo St. DuBois as leading man to wreck the proceedings. With an opening number to cause maximum offence, and a cast so awful it makes the entrants of Pop Idol look talented, Max and Leo can't wait for the opening night and those thousands of unspent dollars. Trouble is, they hadn't banked on the audience and a massive Broadway hit!

Although the transfer is starting to show its age the print is in surprisingly good condition. Never the less, the picture still suffers from a slightly washed out appearance which can then highlight an occasional problem with grain. Still, the overall picture detail is good enough with no real signs of artifacting or outlining whilst colours can be rich and vibrant, with reds looking particularly impressive. There is a fair amount of print damage, with dust scratches and other picture imperfections throughout, but considering the age of the print it is forgivable.

Although accompanied by a Dolby Digital 448Kbps 5.1 soundtrack, for a film dating back to 1968 there is very little in this rematrixed soundtrack to get excited about. The dialogue is crisp and clear in the centre channel whilst the front channels do manage to offer some form of stereo steerage. Whilst there's a bit of activity during the classic opening musical number, the rear and LFE channels remain fairly silent throughout. Still, it is the fast paced dialogue which forms the most important part of the film and it is the centre channel which provides the most clarity.

The menus are cleverly animated and scored with a cut scene from the film whilst the extras on the second disc form a welcome additional to this classic Mel Brooks film. Never the less, for a relatively short film, and with little to challenge the encoding process, it is fairly hard to comprehend just why the film and extras had to span two discs. The Special Edition tag doesn't always need two discs you know (although, if you want to be cynical, it does help when you need to boost the asking price).

Highlight of the extras has to be the 60 minute Making of featurette which not only underscores the perils of the aging process, with Gene Wilder and Mel Brooks looking particularly haggard (although with Wilder does have an excuse) but provides an interesting and exciting insight into the production. Split into a number of acts, with an intermission provided by a dancing Lee Meredith doing exactly what she did in the film, everything from the script, the music and the production is discussed in detail by many of the surviving actors and crew. Finally, it only seems natural for Brooks and Wilder to mention the new Broadway musical.

The Playhouse Outtake is not quite as it seems as, rather than being an outtake it is more of a extended scene. In it, Max, Leo and Franz attempt to blow up the theatre with much hindrance from a drunk they encountered in the bar that Max and Leo were celebrating their disaster. It's funny enough, but rather too long winded and it's not that difficult to see why it was cut. Still, it's nice to see it on the DVD.

The remaining extras are reasonable enough with some nice set designs in the Sketch Gallery whilst the Peter Seller's Statement is a short video of screen writer Peter Marzursky reading out the advert the comedian published to enhance The Producers chances at the box office. Things are rounded off with the omnipresent Theatrical Trailer.

Although there's no doubting the comic genius of Mel Brooks you definitely have to be in the love him or loathe him department. Trouble is, The Producers is one of those films which really separates opinion and, to make matters worse, I'll have to be one of the annoying types who sits somewhere in the middle. After enjoying the madcap writing of Mel Brooks in Spaceballs and Blazing Saddles I was hoping that, being new to The Producers, this film would provide the same stinging satire and laughs.

There's no doubting that the satire is there, plus it takes one hell of a person, and a Jewish one at that, to poke fun at Hitler and the Nazis. But funny? Well for me, it was a bit of an unfunny anti-climax which was only saved by the outstanding performances from Zero Mostel and Kenneth Mars.

It's also no wonder that the subject matter raised quite a few eye brows in the Jewish communities, even more so when you consider that when originally released in 1968 the war time atrocities were still fairly fresh in the minds of quite a few communities. Still, Mel Brooks thought it was quite right to go and poke fun at figures of hate and if you take a step back and think about, he was perfectly correct.

With the highly successful Broadway hit The Producers finally making it's way across the pond to the West End (and yes, the irony is too unreal to say the least) this DVD release is perfectly timed to capture its renewed interest, even if the stage version is getting publicity for all the wrong reasons (although, it does seem to me that's it's all been rather deliberate!).

This is welcome and long overdue release for all Mel Brooks fans. Never the less casual fans may still want to consider a renting rather than buying.