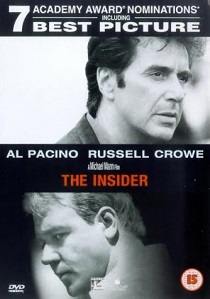 When research biologist Jeffrey Wigand is sacked from Brown and Williamson, a large American tobacco company, for objecting to their ethics he decides to turn whistle blower. Unfortunately his severance package, although extremely generous to him and his family, has a strict confidentially clause. If he were to speak to anyone about the goings on in the company all his benefits would be stopped and he risked been sued. When 60 Minutes producer Lowell Bergman contacts Jeffrey to help with some document translations his previous employers become nervous and lean hard on Jeffrey to honour his confidentiality agreement.

Naturally, he becomes agitated by the interference he decides to spill the beans on the tobacco industry by giving an interview. However, by giving the interview he risks breaking the agreement and suffering the wraith of the powerful tobacco corporations. With the pressure mounting, and his marriage disintegrating, things are made worse when the CBS attorneys advise CBS News to shelve the interview and avoid a damaging lawsuit during a multi-billion dollar takeover. However, Bergman is standing firm and he pushes out all the stops to get the interview aired.

The picture is first-rate with a high bit-rate rate throughout the film. There are certainly no signs of artifacting or outlining with the many dark indoor and night time scenes in the film handled superbly. However, I did feel at times that the outdoor scenes could be a little too bright and washed out. Although this is a dialogue intensive film, unlike other films with similar genres, the surround channels are not neglected. There are a tremendous number of ambient effects throughout the film with weather effects being particularly impressive.

The extras, or lack of them, really do bring the quality and value of this disc down, especially if you compare it with its R1 counterpart which has superior extras in the form of Trailers and additional Featurette.

The film is an absolute gem, although it suffers from one major problem. It's not the sort of movie which warrants multiple viewing, however, it is so good it is still something you really must own. The acting from both Pacino and Crowe is outstanding. Pacino is on his usual acting autopilot and, after Gladiator, it is interesting to see a different persona from Crowe. It's just a pity about the extras.