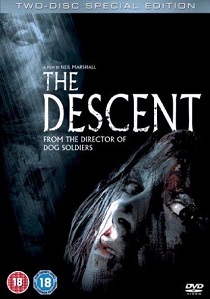 A year after a terrible accident that devastates Sarah's young family, she and Beth go to meet with their friend Juno and 3 other friends at a cabin in the Appalachian Mountains for an adventure holiday. The trip is meant to help Sarah with her grief and she is determined to get on with the holiday, though she is still understandably affected by her loss.

Juno greets them as they arrive at the cabin and introduces them to Sisters, Rebecca and Sam and the younger up for anything Holly. The beer bottles soon stack up as they sit back in front of an open fire and share stories into the night. On the drive over to the site the following morning, we see Sarah loosening up and clearly enjoying driving the 4x4 rather quickly over the rough terrain. In the other 4x4 the 2 Sisters and Holly are discussing the intended caves which Holly feels are for tourists as they are mapped. As they kit up and ready themselves for the walk to the caves entrance, Juno puts the guidebook of the cave into the one of the 4x4s glove box. Oh dear.

When they descend into the cave opening, it becomes clear that the young Holly has an ego to rival Juno's in terms of what they want to achieve from the trip. You just know that it will end in tears. Being the last of the group to navigate a very narrow passage, Sarah gets herself stuck and gets a bit panicky. The resulting falling in of the passage and Sarah's escape with the help of Beth, leads to the admission from Juno that these are not the caves that were in the book she left in the 4x4, so the flight plan logged by Rebecca of the intended route is useless, no one knows that they are down there.

Seeing this as the ultimate challenge and adventure, it doesn't take long before Holly, in a bid to clearly outdo Juno, is racing off ahead of the others in order to be the first to take on whatever challenge the cave presents to them. This she manages in a rather spectacular manner by way of falling down a hole and breaking her lower leg as she lands. Her friend's are soon at her side with Sam the Medical Student taking charge of sorting out her broken limb, as best she can. Now not only do they have to navigate their way out of the caves they have no idea about, with an injured friend and something hungry which is lurking in the darkness. Cue lots and screaming, plenty of gore and ladies that kick some ass. Lovely.

Given that the film takes places in an extremely dark location with a single or limited range of colours from one end of the spectrum to the other, the picture is nothing short of amazing with a bit-rate that hardly ever drops below maximum for the duration of the film. It's no wonder that the two soundtracks and the video means that the extras have been shipped onto a supplemental disc. The level of detail on the disc is wonderful, with black levels which are nothing short of pixel perfect and as black as black could be. With few signs of grain, no artifacting, outlining or print damage, what could have been a total disaster on DVD has been transformed is some kind of revelation. If you ever needed to test your LCD or plasma television to its full potential then you'll find no better transfer.

The film is accompanied with two excellent sounding 448 Kbps Dolby Digital and 1536 Kbps DTS soundtracks. This is the perfect sort of film for showcasing both formats and no matter which soundtrack is used you're unlikely not to be impressed by the results. In fact, your more likely to be blown away, or more likely to be scared silly, by the shear brilliance and ingenuity of the wonderful array of effects which well and truly place you in the thick of the action. The film also boasts the highest DTS bit-rate of any film I've come across before. However, does this massive bit-rate mean that it sounds any better than the Dolby Digital or any other lower bit-rate DTS soundtrack? We'll have to see.

Hollywood films tend to provide soundtracks which either go way over the top or are flat and lack dynamics. However, the effects presented by The Decent are just right and they truly enhance the viewing experience. If there was ever a film which could convince your credit card out of hiding for a trip to the A/V shop, then this is surely one for the shelf. Both soundtracks offer dialogue which is crisp and clear in the centre channel whilst the stereo steerage and the musical score is extremely impressive in the front channels. However, it's the surround channels which manage to notch up the creep factor by providing masses of ambient effects, growls and screams to keep you on the edge of, or behind, your seat. Even the LFE channel provides a useful collection of rumbles in all the right places without over doing things.

Even though both tracks offer some exemplary entertainment in the sound department, given that the DTS format has the slight advantage with its superior separation, plus a subject matter which is perfect as a sound showcase, the DTS audio track should most definitely be the soundtrack of choice. There's not many films or soundtracks which can raise the hairs on the back of my neck, but the DTS track managed it here and it soundtrack which justifies all that expensive kit humming in the corner. However, it is still fair to say that the Dolby Digital track is no slouch either, and the simple fact that a small budget British film can outgun a big Hollywood soundtrack should be a reason for celebration. Could The Descent offer the best sounding audio soundtrack on DVD so far? It's certainly looking that way.

Once you get past the ever annoying collection of trailers which can only be skipped through via the Next option, the menu is a semi static affair, with no music, just atmospheric noises in rather eerie Dolby Digital 5.1 to emulate the sounds of a cave and something that lurks within. The menu design has been created to represent a cave wall with a torchlight passing over it to reveal the options written on the cave wall. You can't freely navigate around the menu and you have to patient and wait for the option to be highlighted before it can be selected. Whilst it's a little tedious and slow, I still liked the idea. It is a very simple and novel idea, and it suits the film extremely well.

Although the film is released as a two disc set, only one disc was sent for review. As a result, the extras reviewed here are just the two commentaries, one with the director and five of the cast (Natalie Mendoza was working) and one with the director and crew. The Director and Cast Commentary is very enjoyable with the girls clearly enjoying themselves amid Neil Marshall's humorous comments and filming facts, while all the time bouncing jokes off each other. Given that I enjoyed both the film and the commentaries, I will be extremely interested to view the content of the second disc once it is released.

I did not know what to expect when I first watched this film as I had not heard or seen anything about it before. But I really enjoyed it, and it has all the suspense and thrills a horror film should have without descending into the usual splatter filled banality which Hollywood is so fond of these days. I also found the cave scenes realistic, and you really do get a sense of the close confines of being in a cave. I was quickly reminded of an outward bounds course I did in the mid eighties, minus the horror thankfully. The scene where Sarah is trapped really hits the spot and you just know what it would feel like to be in her situation. There's also some clever use of different coloured lights by each of the girls so you know just who you were watching at any point.

Fortunately, the producers opted to keep the cast sane by staying out of real caves and opting to construct their caves on a mammoth set at Pinewood Studios. And they were very convincing sets indeed, but without listening to the excellent audio commentary you would have been none the wiser. Thankfully, the use of CGI is also kept to a minimum, with the bulk of it used for some cave scene backdrops. However, budget restraints may have been the real reason for the lack of fancy effects. Still, as with Dog Soldiers, it just goes to prove that CGI effects don't necessarily make a film any better.

The Descent is a good old fashioned horror/suspense film that is certainly as good, if not better, than anything Hollywood has put out recently of that genre. It's cinematography is shockingly simple and it makes you jump in all the right places. It also goes to prove that it is indeed possible to make a good film without spending the equivalent of the national debt of a small country. Three cheers to Neil Marshall and co. More please!