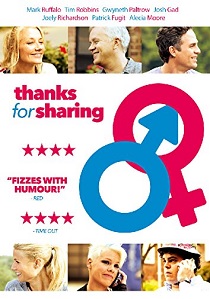 ReviewComedyDramaRomance
Review Article Go back to homepage
Adam takes his sex addiction rehabilitation one day at a time, and this is the same advice he offers to his friends Mike and Neil. But when Adam meets and falls for Phoebe he is forced to keep his troubles a secret. But as their relationship blooms, will he be able to keep his secret under wraps - or can he finally turn sex into a meaningful aspect of his life and save their relationship?
Mark Ruffalo, Tim Robbins, Gwyneth Paltrow, Josh Gad, Joely Richardson, Patrick Fugit, Pink
Comedy, Romance, Drama
2
1 Hour 45 Minutes
Thank you for supporting DVD365.net when you order using the link(s) below.
Buy DVD
Story

The film follows the lives of three New York friends who meet while attending 12-step meetings to help treat their addiction. And it's not your "ordinary" addiction to drugs and/or alcohol, but an addiction to sex. And given the amount advertising plastered all over buses, advertising hoardings and magazines that use sex to sell everything from toothpaste to perfume, the group certainly have their work cut out as they struggle through their daily lives avoiding temptations. And if that's not bad enough, there's the ever present lure of the internet too.

Tim Robbins plays Mike, a long-married small-business owner and recovering addict. He's the patriarch of the group, but his bright outlook on life has been recently shattered after, much to his discomfort, his son Danny turned up at home struggling with substance issues. But along with this challenge, Mike's efforts to control his wife as tightly as he does his impulses is tearing the family apart.

Mike's sponsee is Adam. He's been the big success story of the program for the last six years - mainly due to his on-going celibacy. Adam is confident and successful in his career, but he's also afraid to allow love back into his life. But that is until he starts a relationship with the woman of his dreams, Phoebe, and finds it difficult to control the urges he has successfully suppressed for so long.

Together, Mike and Adam befriend an obnoxious young doctor Neil whose uncontrollable addiction is ruining his medical career. Neil is still deeply in denial about his problem, so when he's befriended by Dede, a hair stylist who has also just begun to take her own small steps back to health, he begins to wonder if she'll be able to help him save him from himself.

The rich and varied back drop of New York allows for a large variety of colours, textures and (to pardon the pun) plenty of naturally looking flesh tones. From the opening moments of the film, I was pleasantly surprised at just how sharp and detailed the images were. Given this is the DVD edition, the Blu-ray edition (not currently available in the UK) will more than likely look fantastic in HD.

Also, given its recent theatrical release, and film stock originating in the the digital domain, the picture is free from artifacting and other forms of picture imperfections. However, whilst the majority of the scenes are well lit, some of the interior scenes can appear to be a little too dark a times. Still, I guess after being spoilt with the quality of Blu-ray, I'm being a little too picky here.

Unsurprisingly, Thanks For Sharing is dialogue intensive film so you'll be fairly foolish to expect anything else but a low key and rather simple soundtrack. Fortunately, the 448Kbps 5.1 Dolby Digital soundtrack does just that by providing a crisp and clear soundtrack with some good separation and stereo direction in the front channels. Never the less, although not unusual for a dialogue based film, I did have to crank up the volume somewhat before I was comfortable with the level of the dialogue. Fortunately, the dialogue didn't wander off and it remained locked in the front channels throughout.

The soundtrack also includes a reasonable amount of music and, whilst the surround channels are hardly challenged with either the dialogue or the numerous ambient effects, the musical score does manage to find its way to the rear channels to good effect. Overall, nothing fancy, but perfectly functional and fit for purpose.

Whilst the American release contains numerous additional features - including an Audio Commentary with director and writer Stuart Blumberg plus co-writer Matt Winston, the Region two edition comes equipped with nothing. Even a set of subtitles are missing from the disc which mean that this release was created with a bare bones amount of effort. Still, at least the menu system manages to be animated and scored - albeit in a fairly simple and uninspiring manner, whilst you do get a few previews for some forthcoming titles.

Given this, it's a great shame that numerous new forays into the home entertainment market have seen the distribution companies deciding not to provide any additional material with their releases. Naturally, this can only be considered as a money saving exercise in what is a cut throat industry that is becoming increasingly threatened by on-line streaming. Never the less, I've always felt that owning something physical - and with additional bonus features to attract a willing purchaser - is always preferable to simply downloading a film from the internet (whether legitimate or not). After all, I'm yet to see a streaming service offering the same set of bonus features that DVD and Blu-ray can offer.

Given than sex addiction and any grubby details surrounding sex are pretty much taboo subjects in America (and probably Britain too), it's hardly surprising that the film sank without a trace at the cinema. Even the fairly impressive cast of A-list stars didn't tempt people into the cinema - although I still have my doubts about the acting abilities of Pink! (AKA Alecia Moore)), even if her role as Dede was widely praised by critics. I guess I can't stop comparing her noisy music against her acting. Still, at least her transition from music to acting has been a little more convincing than Madonna's awful attempts!

Overall, Stuart Blumberg's efforts are at least commendable, even if the outcome is not entirely satisfying. Given the subject matter is real one, and it can be troubling to many people, using comedy (which, to be honest, isn't all that funny in this film) was always going to be hard thing to do. This becomes even more of a problem when the underlying theme is a fairly standard, and equally predicable, romance (a classic - but probably deliberate - oxymoron if there even was one!).

Oddly though, at times, I felt a little uncomfortable, and I just wonder whether that attempting to add a comedy element was just a little too much over the top. Also, with its simultaneous layers of drama, romance and comedy, it can become a little confusing as the script struggles to find its way and, ultimately, provide you with a message. However, that doesn't mean that it's all bad as Betty Thomas managed to use comedy and drama to great effect whilst respectably exploring drug and alcohol addiction in the excellent 28 Days. Thanks For Sharing tries this, but ultimately fails to make the grade.

Given that films about drug and alcohol addiction have been pretty much done to death, it'll be interesting to see just how well Thanks For Sharing does on retail and rental DVD - even more so since it wasn't picked up by any of the "big boy" distributors. If you don't fancy purchasing a copy then I'm sure a curious rental could provide interesting viewing - even if it's only for the sight of Gwyneth Paltrow striping and performing a lap dance.

Whilst this rather quirky film won't appeal to all, if you're expecting to see sex in every scene then you're going to be rather disappointed - after all, as this film is based on people in sex addiction therapy, it would be a rather dramatic failing if this were to be the case! However, if you require subtitles then you're going to be disappointed - and probably a little angry too (although you could probably get some therapy for that!).