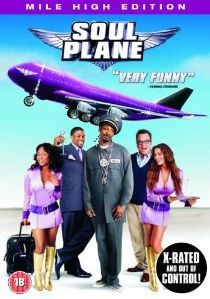 After a humiliating experience on an airplane with some dodgy in-flight food, witnessing his poor dog meeting its maker via a plane engine and even more dodgy plumbing in the toilet, Nashawn Wade sues the offending airline and is awarded a unprecedented settlement of $100 million dollars. After a number of failed business ventures Wade is determined to finally make something of himself and put his new found wealth to good use. As a result, Nashawn creates the full service airline of his dreams. Named NWA, and based at the all new Terminal Malcolm X at Los Angeles, it's complete with sexy stewardesses, funky music, bathroom attendant and onboard dance club. It's the airline with soul.

Essentially an airline run by black people, for black people, the inaugural flight of NWA flight 069 (ho, ho) from Los Angeles to New York promises to be a flight which will shake the airline world to it's foundations. And when the Hunkees, a typically white American family, find themselves on board flight 069 after their original flight is cancelled, it's going to be an experience which will change their lives for ever. Oh boy, let the all round racial stereotyping begin...

For such a recent release there would be question marks if the print was anything but perfect. Fortunately, the transfer is spot on with no signs of any problems with artifacting or outlining. And given that the films premise hardly requires anything fancy from the cameraman, it is still quite a serious test for the DVD encoding process with the dark interior of the cockpit to the colourfully lit dance floor. Never the less, it's all handled with impressive ease and the DVD manages to reproduce some rich and bold colours, especially the huge amounts of purple, solid black levels and an impressive colour depth throughout.

If a film is to contain numerous rap stars then it would be fairly unusually not to have a rap tune or two sandwiched in between the onscreen goings on. Fortunately, fans of rap and R&B are going to be in their element as the film is awash with numerous tunes which will shake the room, annoy the neighbours and beach whales with it's low frequency effects. But it's not just about the musical score which makes up a soundtrack, and the 448Kbps Dolby Digital 5.1 soundtrack fails to disappoint with some crisp and clear dialogue in the centre channel and plentiful use of the surround channels by the thumping soundtrack and ambient effects.

The main menu system is animated and scored with numerous, and to be fair, fairly funny cut scenes from the film. I especially like the guy with the wands who guides the plane to the gate (there must be an official name for them) dancing around the place. There's also a nice transition effect to the other menus which unfortunately then become a static and silent affair. Extras wise, it's a bit of a mixed bag, but there's sufficient material here to keep most extras hungry people occupied for a while.

The main extra would have to be classed as the Cast Audio Commentary. In a rather rare occurrence these days, the principle stars Kevin Hart, Tom Arnold, Gary Williams and Godfrey, as well as director Jessy Terrero, mange to find the time to talk about the film. Trouble is, it's ultimately about as interesting as the film and the commentary is simply made up of the actors poking fun at each other. Prime trouble maker is Tom Arnold who does his level best to interrupt everyone as poor old Terrero attempts to discuss the technical details fall on deaf ears. However, if it all becomes too much for you, you can always revert to the commentary subtitles whilst listening to the main audio track.

Next up is the Boarding Pass: The Making of Soul Plane featurette. Running at twenty five minutes it goes behind the scenes of the movie and interviews the majority of the principle cast involved. However, although it's long enough and contains plenty of interesting information, it's still made up of the usual PR stuff and everyone saying just how wonderful everyone else is. Pretty much carrying on this featurette is the five minute Upgrade featurette. This time it concentrates on the director and reveals that his previous work was in the field of music videos. Again, there's the usual back slapping from other cast members, but on the whole these two featurettes provide an interesting insight in to the making of Soul Plane.

The Safety Video feature is simply the short safety video taken from the film. Mind you, this is no ordinary safety video as it's cleverly set against the Destiny's Child hit tune Survivor and is a little more graphic in what will happen to you in the event of a plane crash. It's just a pity our safety videos can't be as honest as this. Next up are the eleven Deleted Scenes. Whilst some have been deleted for pacing purposes, one or two of them are quite funny - especially the scene where a rather over weight lady is being checked to see whether she'll fit into the seat. It's just a pity it wasn't included in the film.

The Outtakes reel is the usual set of filler material with plenty of scenes containing unfunny falling about and line fluffing. The filler material continues with a Behind-the-Scenes Photo Gallery which contains a number of production stills whilst things are topped off the with the Theatrical Trailer. Given that the film is rather poor, the extras do help to bolster the value of this package by a rather large amount. If you were one of the few who liked the original film then you're sure to find something of interest in these extras.

I could rant and rave for hours about the racial stereotyping in this film, but if you take a step back and examine the film more closely you'll discover, as with Undercover Brother, it is essentially poking fun at both blacks and whites and their strange mannerisms. Still, some of the jokes can be a little eyebrow raising at times and, at worst, borderline racist to both blacks and whites. However, putting these inevitable race issues aside, it is still one of the most disappointingly unfunny films I've ever seen and you can be assured that this is no Airplane. And it's a pity really as after so much promise (I can't help myself when it comes to toilet humour) it all falls rather flat with unfunny jokes and some abysmal acting - I really do think it's about time that someone told Snoop Dogg that he should stick to rapping as his acting career is a bit of a no goer.

On the plus side, there are moments where you can manage a chuckle and with airport security now taken very seriously, it's nice to be able see a bit of fun being poked in that direction with the female security guards feeling up all the blokes they take a shine to. And if you are a frequent airplane traveller in economy class then you may well find the palatial differences between first and economy annoyingly similar. Also, the layout of the plane with its casino and dance club may give Mr. Branson some interesting ideas for the design of his new fleet of Super Jumbo A380's. However, I suspect that the availability of the on board lap dancers and extremely sexy air stewardesses will be a bit of a no-no. Still, you can live in hope.