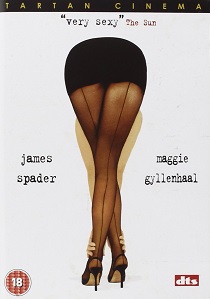 Lee Holloway is a lonely and depressed young woman. Her parents have spent most of her life arguing whilst her drunken father vented his anger on her mother. Her only way to get noticed was to cut herself and whenever Lee got anxious or unhappy she found solace in pain. Released from a brief visit to mental intuition in time for her sisters wedding, Lee soon witnesses her drunken father lashing out at her abused mother and she beats a hasty retreat to her bedroom for another painful solution to her families problems.

In an attempt to gain some independence and get away from her dysfunctional family Lee decides to take a typing course. During the classes, and much to her surprise, Lee discovers that she is more than capable of handling a typewriter and upon completing the classes she applies for the job as a secretary to E. Edward Grey. But during the interview Mr. Grey attempts to put her off the job by claiming that the work is extremely dull and mundane. Never the less, Lee is still keen on the job and both Lee and her mother, Joan, are overjoyed when she is offered the job.

And true to his word, the work is indeed rather mundane, but Lee is desperate to please her new boss and in between the typing chores she is more than happy to be ordered to climb into rubbish skips to retrieve lost papers and reset the mouse traps. All of these slightly degrading tasks are for a purpose, they are to humiliate Lee and arouse Grey. But Lee enjoys being the submissive and when Grey starts spanking her as punishment for typing errors it finally awakes her sexuality and she discovers that a normal relationship is not for her. Hungry for more punishment, Lee starts to deliberately introduce typing errors and, with Grey more than happy to respond, the pair embark on a mutually satisfying sado-masochistic love affair.

But Lee's happiness turns to devastation when Grey suddenly withdraws his attentions and eventually makes Lee redundant. Confused and angered by his rejection, Lee attempts to settle for a relatively normal relationship with her on-off boyfriend Peter. However, with her expectations in the bedroom a little different to what Peter is offering she leaves him and searches through the small adds looking for someone into the S&M scene. But having finally found love and self-affirmation with Grey, Lee is determined to fight to regain and preserve her newfound happiness no matter what the cost.

For a relatively low budget film the picture is remarkably bright and colourful with some rich and vibrant colour tones and good black levels. As the film starts out being rather gloomy and depressing, with a range of colours to match, the lower colour levels highlight a number of problems with picture grain. But as the film progresses the picture becomes much brighter with a greater range of colours and the grain becomes much less of a problem. There are no signs of edge enhancement or other forms of pixelisation whilst the picture transfer is clean with only a few noticeable dust specks and other picture imperfections. The quality of the transfer can vary greatly from scene to scene but this is most likely down to different types of equipment or film being used during the film's shoot. Never the less, for a relatively small budget independent film it is more than satisfactory.

In a first for a Tartan release, the film comes with both a Dolby Digital and DTS soundtrack. Trouble is, Secretary is not really the best film to showcase the two sound formats in what is a dialogue intensive film. Although the superior separation of the DTS soundtrack ensures it nudges past the winners post first, there's really not a lot in it as both soundtracks put in a good performance. The dialogue is crisp and moderately clear in the centre channel whilst the front stereo channels offer some reasonable steerage. Again, with this being a dialogue based film there is little or no use of the LFE channel whilst the surround channels are mainly used to highlight the musical score. The only real problem I found was that the volume level needed a fair amount of correction throughout - mainly thanks to James Spader's occasionally hard to understand mumblings.

Whilst the menu system is animated and scored it is all rather simple with a typewriter noise rattling away in the background whilst Lee Holloway's fingers tap away over a typewriter. It's not going to win awards for its design, but at least it isn't one of those boring static and silent affairs.

The extras are reasonable enough with a number of interviews with James Spader, Maggie Gyllenhall and director Steven Shainberg. The on set interviews are far more interesting, especially Maggie Gyllenhaal's, whilst the promotional press interviews are rather dull. The relatively short Behind the Scenes featurette has a number of additional interviews with the cast and director as well a look on set. Although it offers a little more than the usual self promoting featurettes, it doesn't really go into too much detail. It could be possible that the director didn't expect the film to be as a bigger hit as it was and only a limited amount of information was available. Either that, or he's holding something back ready for a special edition director's cut.

Writer Erin Cressida Wilson and director Steven Shainberg provide an interesting commentary which gets better as the film progresses. Erin is initially rather quiet with Steven having to prompt her for information, but once the two get going the information regarding the sets, the costume design and the actors is quite interesting and easy going as they point out quite a few things you may have missed. The trailer and television spots soon become rather tiresome, but at least you can say you've seen every conceivable promotional trailer for the film.

Secretary has received many accolades for its script and the performances of James Spader and, in particular, Maggie Gyllenhaal who received a whole host of Critics' Circle awards and a 2003 Golden Globe nomination for her stunning performance. Secretary was also one of the most critically acclaimed films of 2003 and winner of the prestigious Special Jury Prize for Originality at the 2002 Sundance Film Festival. It's no wonder that the film caused such a stir, and not just for its content.

Just don't let the sado-masochistic element to the film put you off. Although there is no doubt it is an important part of the film, and even then it's all very mild with nothing which would cause offence, Secretary is in no way a film that sets out to exploit or sell sex. It's more a case of it being a rather unique love, and ultimately touching, story of a troubled woman finally finding herself. Think of it as a Pretty Woman for adults, but with plenty of spanking.