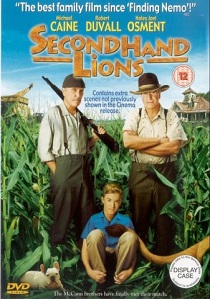 Fourteen year old Walter didn't know he had any uncles, let alone knew he was about to stay with them for the summer. And when his mother Mae drops him off at his uncles' run down farm in rural Texas is it the last place on earth he wants to spend the summer. After all, it's in the middle of nowhere with two crazy, cranky old men who don't own a television with only the promise that she'll come back for him. And boy, are his two uncles crazy, and if the warning signs on their long drive to the house don't put you off then they've got an even warmer surprise waiting for any unwanted visitors.

Eccentric and gruff to the last, Hub and Garth McCaan are said to sit on a huge pile of money and rumours abound that they were bank robbers, Mafia hit men and/or war criminals in their younger days. But the two old men spend most of their days hunting for catfish, with a couple of shotguns, and then without the need for entertainment from a television, spend the evenings on their front porch scaring away unwanted salesmen with their guns. Needless to say, the stories of their wealth still attract the unwanted attentions of relatives they've never seen for years and buckshot dodging salesmen.

The real truth to their past is elusive, but Walter begins to see a new side to his crazy great uncles and little by little, their amazing stories of their adventures in Europe and Africa come to life and a new world evolves for them. They also give Walter something true to believe in - a world where honour and valour mean more than money and power, and a place that, real or not, belongs only to him. Likewise, in telling their stories to their nephew, Hub and Garth begin to see their own lives with new eyes and begin to enjoy their days before it is too late.

The picture is bright and colourful with a good level of detail through out. The bright and wide open dusty plains of Texas could cause many problems with image shimmering and outlining, but fortunately the encoding process takes everything in its stride. In fact, if you don't listen to the audio commentary then some of the CGI enhanced scenes are virtually impossible to detect. The darker interior scenes also have plenty of detail and exhibit no signs of either artifacting or outlining. This is all the more surprising when you consider that the film only has an average bit-rate, although this is probably down to the fact that the film is accompanied by an audio commentary and rather dynamic soundtrack. The print is also free from dust scratches and other forms of picture imperfection.

The Dolby Digital EX soundtrack is particularly dynamic with good use of the surround channels for both the musical score and the many ambient effects. Dialogue is crisp and clear in the centre channel whilst the front channels are just as impressive as the rears with good steerage and channel separation. The only minor quibble in an otherwise excellent soundtrack is that the sudden bursts music and surround effects could be a little unnerving for both the viewer and their neighbours. With dialogue forming an important part of the film is it very difficult to obtain a comfortable audio level with comprising both the dialogue and effects. Just watch out for the low flying plane!

The menu system is pleasantly animated and scored with a clever and amusing menu introduction sequence. Once the introductions are over the various options and extras are easily accessible over a number of sub menus and, although I failed to find any, there are suppose to be a number of Easter eggs to hunt for too.

The extras are reasonable enough with an interesting and detailed audio commentary track from director Tim McCanlies along with a selection of deleted scenes which run to nearly 45 minutes in total. Again, there is a choice of watching these with the director's commentary and with the film running just short of two hours you can see just why some of these scenes were cut. Interesting as the commentary track is, it is a great shame that neither Michael Caine, Robert Duvall or Haley Joel Osment could find the time to pick up a microphone and offer some of their experiences. The deleted scenes also contain an alternate ending which, in my opinion, is far superior to the rather abrupt and disappointing version used in the film.

One unusual thing about these deleted scenes is the fact they are of a theatrical standard and come equipped with a Dolby Digital EX soundtrack. In a case like this it would have been the perfect opportunity to offer a seamless branching version of the film with these scenes, and the alternate ending, fully restored. And when you consider that Tim McCanlies spends most of his commentary regretting the cuts, it does stink of a real missed opportunity. Although the film was well received it hardly broke any box office records. As a result I suspect that a fully restored director's cut will not be making an appearance and what we have here is what we're going to be stuck with.

Continuing with the extras, next up is the Secondhand Lions - One Screenplay's Wild Ride in Hollywood documentary. This essentially follows the film on its extremely long journey from the initial script to the big screen. Director Tim McCanlies and many of the producers are interviewed about the project whilst Tim reveals a number of interesting personal facts about the characters in the film. The casting of the actors is also mentioned, with some very interesting names tossed about over the years, and it all ends up being a really interesting and revealing documentary. You won't find a much better documentary on DVD than this.

Whilst the main documentary concentrates on the pre-production side of the film the On the Set with Secondhand Lions is, rather unsurprisingly, a behind the scenes featurette on the set of the film. Again, it is full of interesting facts and contains plenty of interviews with the cast and crew. There are also some interesting revelations about the CGI effects which were used so effectively in the film. The Haley Joel Osment : An Actor Comes of Age documentary goes to show just how pleasantly spoken and confident a person he really is. Various cast and crew give their opinions on just how big a star he will be and as long as his persona is not just for the camera, and I don't believe it is, I'm sure he will be a massive star.

It's all rounded off with a short Visual Effects Comparison feature on a number of CGI effects used in the film, some more obvious to the eye than others, whilst there is the usual plethora television shorts for the film (after you've seen one of them, you've seen them all) and the main theatrical trailer. Put all this together with Michael Caine's superb Texan accent, the extras add to what is already a wonderful film and package.

Most people probably remember Haley Joel Osment for his wonderful role in The Sixth Sense. So it may come as a bit of a shock to see him as this young teenager and struggling to control his breaking voice. Is this acting, makeup or CGI? No, face facts, you're getting old and it's just Haley Joel Osment growing up. Hard as it may seem, time and tide wait for no one and it can all come as quite a shock. It also goes some way to ruling out his alternate career as a solo soprano singer.

Whilst Secondhand Lions is billed as a family film, I would have to say that it sits in a bit of an uncomfortable place between drama and family oriented. And perhaps this is why the film failed to capture the desired audience. Whilst some of the scenes will capture the imagination of the younger viewer, and there are some nice messages in the film too, others will leave them bored and confused. Never the less, it is still a wonderfully entertaining, touching and funny film and as a result is highly recommended.