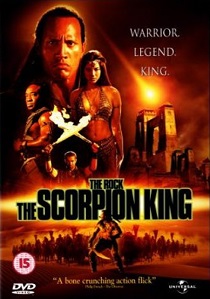 As the evil king Memnon unleashes his armies across the known world all but the smallest pockets of resistance have been defeated. Memnon's secret weapon is the beautiful sorceress Cassandra, whose power of foresight, guides his forces into battle makes them seemingly unbeatable. As introduced by The Mummy Returns, WWF star the Rock plays a hired assassin who's job it is to kill Cassandra and so doing weaken Memnon's armies resolve and let the armies of the free people strike back.

The extras are reasonable; there are a good number of them covering a lot of the filmmaking process. It is always nice to be able to watch the full film with deleted / alternate scenes inserted in to the full film, a feature many other DVD's such pick up on. The menus have a lot the films action scenes as backgrounds and transitions, but the menu selection is unimaginative. The picture was reasonable and so was the sound, but the DTS soundtrack (again a welcome addition to a region 2 DVD) is the audio format of choice.

My initial apprehensions before seeing this film of it being a piece of non-stop WWF action and generally a weak film were unfounded for the most part. The film is surprisingly enjoyable. It has a good pace to it, reasonable story line, great action scenes (which after all is the prime reason for seeing this film in the first place) and even some comedy.

The fight scenes are well set-up and executed, The Rock's WWF side does come out, but is kept in context, after all if you wanted WWF, watch it on TV. Mostly the fighting is done with weapons, not hand to hand. The special effects and backgrounds are mostly CGI, but it is done well and adds to the fight scenes, after all most of the techniques and technology would have been tried and tested in the previous two Mummy films.

The general feel to the film is a bit unsettled, at some points the film tries to take you more into a slightly more authentic environment, but never quite succeed and most of the time its has the feel of a modern day action story but with people in costume. Also a lot of the plot points are reused from other films.

The actors and actresses played their parts well, The Rock seemed well suited to the part, and was able to inject a bit of humour into his character well. Michael Clarke Duncan also appears in this film and adds a much-needed stronger character to the film and is able to balance out the film, though this is hardly the most demanding role he has ever played.

Any knowledge of the previous two Mummy films is not required, but they are still stronger films then The Scorpion King. But don't let that put you off, it is an enjoyable film and worth watching.