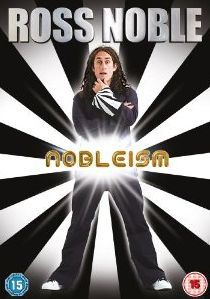 Review
Review Article Go back to homepage
The king of ad-lib, with a list of awards too numerous to mention, comedian Ross Noble continues to reveal his unique, and sometimes surreal, take on the world.
Ross Noble, The Audience
2
2 Hours 1 Minute
Buy DVD
Story

Geordie stand-up comedian Ross Noble has been performing since he was smuggled into his local comedy club at the tender age of 15. Unfortunately, the rather tight licensing laws meant that once he'd finished his sketch he had to make a dash for it through their kitchens. In the years since, Ross has become known for his rather surreal comedy and as genuinely original performer whose stand up performances are none stop from the moment he steps onto the stage to the moment he leaves. With most of his show made up from interaction (or rather heckles from) with the audience, you can be pretty much guaranteed a different show every night.

The king of ad-lib, and as a former Perrier Award nominee, Barry Award, and Time Out award winner for best live stand-up, Ross Noble's fifth DVD release sees him continue to reveal his unique take on the world. Recorded at the height of his latest sell-out UK tour of the same name at The Liverpool Empire Theatre, Ross became the first stand-up comedian to have his show broadcast live via satellite into forty-five cinemas across the UK.

Ross cruises effortlessly through his idiosyncratic observations with and around his audience, pausing to ponder subjects as disparate as spongefoot man, surfing the Mersey, hair gel etiquette, adventures with helium and the hidden dangers of Kinder eggs, all in a brilliantly inventive two hours of high-flying comedy that only really gets going once the poor old audience have had their put down. Needless to say, you need to be able to laugh about yourself and, if you're sat on the front row (and need a trip to the toilet) you'd better be ready for a bit of banter, and a jolly good laugh.

What makes this DVD stand out from most other is the fact the show was also simultaneously broadcast to a number of cinemas. As such, both the picture and sound quality is much better than your average stand-up DVD where grain and poor sound can be a bit of an issue at times. Sure, the dark surroundings of the theatre are going to be a bit of a challenge to reproduce with any great success, but we're not going to sat around complaining at the picture quality when it's the comedy that we're interested in. Fortunately, this DVD doesn't suffer from any stand out issues and you can sit back and enjoy the show.

However, what is rather surprising is the soundtrack. Given that the show was broadcast externally, the disc is provided with a 448 Kbps Dolby Digital 5.1 soundtrack. And, boy, does it make a huge difference, with the heckles from the audience pretty easy to pick out. This tends to be one of my complaints about stand-up DVDs and I'm forever rewinding or turning on the subtitles to try and pick out what is being said. Fortunately, with this disc, there was no need to do so. I just wish that more stand-up DVD from well known comedians made as much effort as Ross Noble has managed to do here.

No matter where you look on this DVD you can't escape Noble's humour - you only have to watch some of the copyright warnings for evidence of that. Ross is also rather famous for his DVDs too, with plenty of extras that most comedians wouldn't even think about providing, and his latest release of Nobelism is just as packed full of high value extras as his previous releases. Needless to say, his many legions of fans are going to be more than happy with what's on offer here.

When you finally get past the usual (and not so usual) raft of copyright warnings you're greeted by a cleverly scored and animated menu that, once you start playing the show, blends in perfectly to the rather strange looking set. This is a two disc set and the extras are spread over the two discs, although given the quality of the extras on the first disc, it would have been just as feasible to release this as a single disc and still enjoy plenty of praise.

Extras wise, no stand-up show would be complete without an encore and Ross duly provides one in the twenty-one minute Encore featurette. Needless to say, the wacky comedy continues unabated with some poor fellow on the front row unwittingly letting himself into a lifetime of strange, and unwanted calls on his mobile phone. Unless he's changed his number by now, the poor fellow is going to get even more unwanted calls as, although the majority of the phone number is "bleeped" out on the audio, pop on the subtitles and it'll provide all of the numbers you require!

If you thought that one comedy track wasn't enough then you can double the laugher by listening to the Audio Commentary. Quite why a disc of this nature needs such a track is a mute point, but then again it continues to show Noble's unique brand of comedy, enthusiasm and willingness to embrace technology. Still, it's not all comedy as Ross does manage to provide plenty of information about the unique setup of the show and how it was broadcast via satellite to forty-five cinemas around the country (although it ended up being forty-four as Aberdeen never quite managed to make the link up).

If you're still in the mood for comedy, over on the second disc the comedy continues with one hour ten minutes worth of Bonus Show Footage. Recorded at other shows on the tour, the picture and sound quality varies across the different chapters and is not a clear as the main feature, but the comedy is just as brilliantly inventive as ever. Next up is the fifty-seven minute Ross Noble interviewed by Oliver Double featurette. Recorded in front of a live audience, Ross just about manages to keep a lid on the comedy and even answers most of the questions put to him. Naturally, it's not as fast and furious as his show, but at least it manages to reveal some information about the beginnings and progression of his career.

In the thirty-three minute Gifted Featurette, Ross talks about the various gifts (including weird things from the likes of fruit and vegetables, mobile phones and waste paper baskets) that he gets left on the stage and how it all started. There's also plenty of clips, and thus plenty more comedy, from the show where he uses the items in his act. Needless to say, every show is going to be different. Ross also took his show on a four-month, 85-date tour, of Australia. He was filmed by Channel Five in a Billy Connolly style (albeit rather cheaper!) documentary and the first of the six forty two minute programmes, starting in sunny Brisbane, is included on the disc. It doesn't carry the same charm as Billy's efforts, but I'm sure his fans will still love the show. Things are rounded off nicely with a rather cheesy Theatrical Trailer for the show.

Well, what can I say? I've seen Ross Noble's manic performances on television shows before, such as Live at the Apollo, but I've never been fortunate enough to see any of his stand-up shows either live or on DVD. However, as a lover of stand-up comedy, and after nearly splitting my sides with laughter, Ross Noble has pretty much shot to the top of my "must see" list. I've always thought his comedy was a little bit too surreal for my liking, but after watching his latest show he's managed to add another fan to his growing legion of followers.

Sure, his existing fans are already going to know all about his shows and know what to expect from his previous DVD releases but, believe me, if you're a fan of comedy, then you really do need to get yourself a copy of this DVD. Not only is the actual stand-up routine hilarious, it's the fact that each and every extra on the disc is just as good and, even without them, the disc would still be a must buy. Needless to say, I'll now be keeping my eyes peeled for any Ross Noble concerts coming to my area.

It's all cracking stuff and can be safely called one of the best comedy DVDs of the year. Highly recommended.