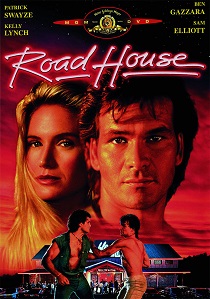 The Double Deuce bar wants to go up market, but unfortunately the usual clientèle are not the most desirable of customers and not a night goes by without a fight and plenty of broken bottles and bones. So who better than Dalton, the best cooler in the land, to sort of the place and throw out the undesirables and stop the fighting.

Dalton does such a good job that the Double Deuce is soon rocking with free spending out of towners. Local racketeer Brad Wesley is not best please with the bars success and he sends in a successive number of his thugs to make a point, only for Dalton to send them packing night after night.

As Brad Wesley stops the Double Deuces drink deliveries and his thugs get progressively violent Dalton is left with only one choice, he must take on Brad and his goons head to head. However, he could do with some help from an old friend, but when the gang strike back with deadly force Dalton is out for revenge and he's ready to fight to the death.

For a film of this age the picture is surprisingly clean and free of dust scratches and other picture imperfections. After watching a number of budget titles I wasn't really expecting much from the picture department, but it actually puts many of the more recent releases to shame with its superb quality. The colours are rich and vibrant and the above average bit-rate manages to ensure that there's no signs of artifacting or outlining.

The age of the film is shown in the soundtrack and the large number of explosions and fights really did cry out for a remastered 5.1 soundtrack. However, all we have he is a standard surround audio track. Never the less, it still manages to keep the action junky happy even if you won't be diving for cover when the action really starts.

Also, if you are a fan of the amazing Jeff Healey and his band then you'll be glad to know that his tunes still manage to come across well enough and certainly surpass anything that the video format could offer. Mind you, it will certainly never beat the quality the CD soundtrack would offer.

Unfortunately, for a budget title the extras are a little on the sparse ground and the menu is a silent and static affair. Although I would normally criticise the distribution company for releasing this back catalogue title to make a quick buck I'd have to say that in this case Warner can be excused by the virtue of the bargain price and that even goes for the soundtrack.

Over the years Patrick Swayze has become a bit of a faded star and has been reduced to lesser roles. Whilst most people will remember him from his tear jerker role in Ghost there was a time when he'd show his true colours and kick some ass, grabbing a beautiful girl in the process. Well, if you want some great action and fight scenes then you couldn't do any worse than checking out this really under rated film.