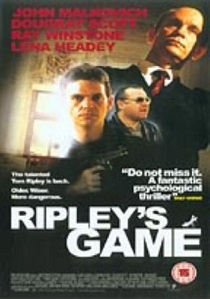 Three years after walking off with millions of dollars worth of forged Renaissance drawings, Tom Ripley has settled into a life of culture and opulence in Italy. But one night Ripley finds his complacency disturbed when he overhears himself being insulted at a party by the host Jonathan Trevanny, a terminally ill ex-pat and local picture frame maker. With Ripley being no 'ordinary' sociopath he becomes determined to get his revenge on the man who embarrassed him.

When Ripley receives an unwelcome visit from former criminal protégé, Reeves, asking for help in dealing with some troublesome business associates, Ripley sees the chance for his revenge. With the Russian mafia moving in on Reeve's turf in Berlin, Reeves desperately needs someone completely unconnected with criminal circles to assassinate a brutal Moscow gang boss. Ripley declines to take on the job himself but suggests an ideal candidate - a dying man with little to lose and an urgent need to secure the financial security of his wife Sarah and young son. Yes, Jonathan Trevanny fits the bill perfectly.

The combination of a hefty fee and despicable target proves too persuasive for Jonathan so after making up some excuses to his wife he heads off to Berlin where he successfully carries out his assignment. Flushed with cash, and oddly exhilarated by the experience, Jonathan returns home to his wife and children. Meanwhile, Ripley has been watching from the wings and is amused at his experiment of turning an innocent man into a cold blooded murderer. With Jonathan's return Ripley considers the game finished, but Reeves has other ideas which will ultimately affect both Ripley and Jonathan.

The picture is bright and colourful with a high and varied level of detail throughout. Scenes vary from dark train carriages, brightly lit interiors and exteriors to scenes filmed at night or early dawn. All are handled with astonishing precision and although the bit-rate only manages to hover around average throughout there are no visible problems. Most films would have given up at the first hurdle, but here the picture is free from any signs of grain, outlining or pixelisation. And for a recent theatrical release it would be unreasonable to expect anything but a pristine print free from dust scratches and other imperfections. One minus point though, there are no subtitles available for the hard of hearing. And with the lack of any other language tracks it's hard to understand why this is missing.

As this is a dialogue intensive film there are many periods where there is very little for your surround system to do. However, the dialogue remains pleasantly crisp and clear in the centre channel with no bleeding to the other front channels. Although there are no signs of rumbling bass effects, that's not to say that the other channels are completely neglected. During the more dramatic scenes, especially the murder on the train, the surround channels burst into life with plenty of ambient and dramatic musical effects that really help to heighten the tension. The haunting musical score also finds its way to the rear channels and as the film progresses to its final conclusion the surround channels once again help to increase the tension to near unbearable levels. Impressive stuff.

The twelve minute On Location Featurette is a rather fresh and interesting way to show how a film is made. There are no interviews with anyone or on set gossip, but just someone standing around with a camera and filming the general goings on from the actual filming, the cast members wondering around the set and talking to each or other or receiving instructions from the director. Although its rather hard to hear the dialogue, and there's plenty of Italian being spoken on set, it's all rather interesting to be essentially stood on set on watching the goings on. Mind you, it's a pity there's no optional commentary from the director to explain things.

The menu is pleasantly scored and animated with various cut scenes from the film of the various characters in the film. The options are displayed at the bottom of the screen and are easy to understand. Each sub menu is also animated and scored in the same style of the main menu. The menu layout and design is not going to win any awards for originality, but it serves it purpose well.

The extras are reasonable enough with some interviews with the cast and crew and an on location featurette. The 12 minute Interview Featurette contains a number of short interviews with principle cast members and the producer. Each principle cast member answers a number of questions from what it was like to work with the director to identifying with their character. It all becomes a little annoying as the interviews are split up into a number of questions which appear on the screen and thus break up the flow of the interview. Quite why they couldn't have an interviewer presenting the questions is beyond me. If you can put up with the annoying interruptions then it's well worth a viewing as each interviewee has something interesting to say.

After enjoying The Talented Mr. Ripley I was looking forward to watching this film and with the brilliant John Malkovich playing the sociopath Tom Ripley I was expecting something out of the ordinary. Unfortunately, the film staggers along for way too long and at times I was rather bored. There are certainly dramatic moments in the film, but unless you quickly become embroiled in the plot then there is very little to keep you interested and you ultimately end up questioning Ripley's motives and sexual orientation (you're probably suppose to do this anyway). If you liked the first film then you may be interested, and if you like John Malkovich then it goes without saying that his acting is superb, but there's something missing from this film to make it a thoroughly decent thriller.

On a technical note I had a great deal of trouble using the chapter selection. Whilst it would allow to advance chapters it point blankly refused to select the previous chapter. The only way to select a previous chapter was to either enter the chapter number directly or select it via the chapter selection menu. And since the DVD refused to play on my PC, I suspect that the disc either contains some devious new copy protection method or it's just been poorly produced. I suspect its the later. If you own a budget DVD player then you may want to keep your receipt in case it fails to play.