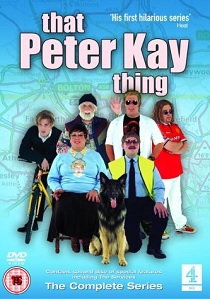 The first episode of the series, In the Club, introduces Peter Kay's most celebrated character, Club Social Secretary Brian Potter, the slightly sadistic personality who does his best to save every penny he can. The episode covers the build up to and the actual TalentTrek final at the Neptune Social Club an includes interviews with the staff as well as the various acts. The Apollo Bingo Hall is the setting for Eyes Down and the cut throat world of Bingo. With staff problems and fire drills being part of daily operations it does take long for the documentary to highlight a few raw nerves as well as a bizarre pastime of a certain member of the staff.

The Ice Cream Man Cometh we are exposed to the cut throat world of the Ice Cream business and the unconventional methods of 'Mr Softy Top' as he gears up for the ultimate ice-cream confrontation at the annual Bolton Show. Aspiring drama student Matthew Kelly craves the opportunity to be closer to the world of showbiz. At the '70s night at The Arena in episode four, will he get the brush with fame he's hoping for?

In Leonard we follow the rather eccentric Leonard de Thompkinson, Britain's oldest serving paperboy, as the newspaper veteran prepares to receive the Bolton Community Award for his years of service. Finally, in Lonely at the Top, following Park Avenue's world shaking victory in the TalentTrek final, lead singer Marc Park has decided to go it alone in the world of pop music. Will he sink or swim as he prepares to launch his new album?

As a television series originally broadcast on Channel 4 there was never going to be anything special about the picture quality. Still, Channel 4 has a knack of delivering the goods when it comes to home grown material, even if it does look like the series was filmed on a tight budget. Never the less, picture quality is more than good enough, and considering the series was filmed in a fly-on-the-wall documentary style, you can't really ask for anything else from what is television broadcast material.

Originally broadcast on terrestrial television, the 192Kbps Dolby Digital 2.0 soundtrack is nothing special. With its documentary style of comedy the dialogue is the most important part of the sound. So it is not that surprising to learn that the soundtrack more than meets its requirements and the dialogue is clearly audible at all times. It's functional, it works, you laugh, what more do you really need?

The menu system is pleasantly scored and initially animated with a map of Bolton town centre scrolling across the display. All six episodes are available on the main menu and it is possible to select an individual episode or sit through the whole lot in one go.

That Peter Kay Thing has been released as a two disc set. The first disc contains the six episodes of the series whilst a second disc contains trailers, the pilot episode plus a number of extended and alternate scenes. Unfortunately, in a bit of an oversight, I was only sent the first disc so I can't comment on the extras on the second disc.

However, the first disc does contain an audio commentary on each episode with Peter Kay, Patrick McGuinness and Craig Cash. But unlike the side splittingly funny commentaries on the various Phoenix Nights releases, these commentaries are actually rather disappointing. Not only were there too many silent moments, but their comments aren't even that interesting or funny. These commentaries have a definite rushed feel about them and one must question that annual festive event known as Christmas as having a bit of an influence here.

After the side splitting antics of Brian Potter and the Phoenix Nights club, followers of Peter Kay will be overjoyed with this DVD release as they can finally see how, and where, the majority of his Phoenix Nights characters came from. This really is a cracking release and his legions of fans will be surely falling over themselves to make a purchase. Never mind the bungalows, with the amount of money this title will make Peter Kay, he'll be able to put a bid in for the whole of Bolton!

Peter Kay is currently one of Britain's best loved comedians with his unique blend of Northern observation humour really tickling the funny bone. Even those hard to please Southerners can't resist his comedy routines. And with the now famous John Smiths adverts, live performances that sell out within hours of being announced (accompanied by record DVD sales), appearances in Coronation Street and the classic Phoenix Nights series, it's doesn't take much to realise that Peter Kay is a comedy gem to be treasured. 'Ave it!