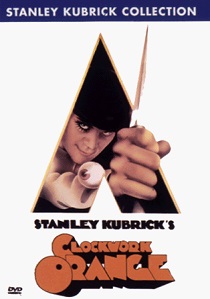 ReviewThrillerCrimeAdventure
Review Article Go back to homepage
Violent hooligan Alex and his gang of droogs get their kicks at the tragic expense of others. Only when the state brainwashes does his previous existence come back to haunt him.
Malcolm McDowell, Patrick Magee, Michael Bates, Warren Clarke, Adrienne Corri, Carl Duering, Paul Farrell, Michael Gover
Crime, Action/Adventure, Suspense/Thriller
1
2 Hours 17 Minutes
Thank you for supporting DVD365.net when you order using the link(s) below.
Buy DVD
Story

A film which requires no real introduction. It became a cult classic overnight for all the wrong reasons, and with the sudden death of the meticulous director Stanley Kubrick and the imminent re-release to the UK cinemas does it hit the headlines again.

Alex and his gang of droogs spend their past time drinking milk laced with drugs and dishing out violence, rape and theft in a horrific vision of the future, all to the tune of classical music. Eventually he is apprehended by the authorities and reprogrammed to be a model citizen. Alex now cured of his violence soon discovers that his previous victims now want revenge and that his gang members are now lapdogs of the police.

With the film being released in 1971 we are not presented with the luxury of stereo, we only get mono. Just how did we ever manage before? The picture is hardly the best bit of film stock around and the widescreen presentation is only matted but the DVD gives it some extra sharpness. The menu is a poor static early Warner affair although it does have music.

The infamous scene where they beat up the drunk on the street, and the copycat incident which caused the film to be withdrawn on the directors insistence in the UK, along with the rapes may have been shocking in the 70's, but comparing it with some of today's films you have to wonder what all the fuss is about. You could even argue that Alex's 'correction' at the hand of the state could be interpreted as today governments attempts at nannying the population.

I have to say that if you have never seen this film before it is worth a viewing, even out of curiosity, and Kubricks vision of the future was not that far off, except the rather wacky clothing. Thank god those cod pieces didn't catch on as a fashion accessory!

Because of the renewed interest in the film, the version reviewed is a fairly old edition, and with Kubricks untimely demise there may be a new edition appearing in the near future. As for a region two release? Don't hold your breath too long.