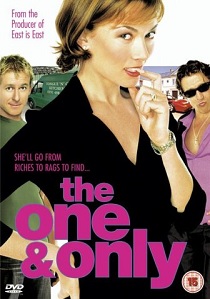 Stevie is the wife of Sonny, an Italian football player, who when not on the physiotherapist table is a striker for Newcastle United. In order to help please his large Italian family Sonny is desperate for a baby whilst Stevie is doing everything she can to prevent herself conceiving. With Sonny's family starting to question his fertility Sonny finally manages to get Stevie to visit the doctor. But when Sonny discovers that all their problems are down to Stevie taking contraceptives he's gutted. With their marriage on the rocks Stevie finally relents and decides to put up with the sickness and stretch marks to have Sonny's child.

Meanwhile, Neil and his neurotic wife Jenny are having the opposite problem. The couple have failed to conceive after years of trying and they have finally decided to adopt. The problem is that Neil isn't really sure that he wants to be a father and, much to the confusion of the people around him, he finds that fitting kitchens is all he really wants to do. But Jenny works at Neil and the couple are finally presented with the chance of adopting a six year old African orphan called Mgala. Unfortunately for the pair, Mgala doesn't speak a word of English so they are going to have their work cut out.

Just as Stevie finds out she's pregnant Neil arrives at her luxury home to fit her new kitchen and as the pair get to know each other they fall for each other. But when his wife Jenny is suddenly killed by a baker's van, Neil finds himself struggling to look after his new daughter alone. Although officially in mourning for his late wife, his heart stills yearns for Stevie. Meanwhile Stevie is suffering at the hands of her love rat husband who is cheating on her and then forces her to live in a completely unfurnished home. It's up to Neil to save her, but can Neil avoid the persistent advances of his sister-in-law who has decided to 'look after him' since Jenny's death? Will the slimy Sonny get his comeuppance? And can Neil win Stevie's heart?

The picture is surprisingly bright and colourful with a high level of detail and above average bit-rate throughout. With a limited budget the picture is not going to be challenging any of the Hollywood big budget block busters, but it is still quite impressive and exhibits no signs of artifacting or outlining. There is the occasional dust scratch but given its limited resources this can be forgiven and overall the picture transfer is exceptional.

For such a limited budget the film contains a surprisingly good Dolby Digital 5.1 soundtrack. Naturally, with this being a romantic comedy there isn't going too much in the way of surround or LFE effects. Never the less, the dialogue is clear and precise in the centre channel without any cross channel bleeding whilst there's even the occasional use of the surround channels for ambient effects.

The extras on offer are reasonable enough although they are not really anything particularly special. There are eleven deleted scenes, some more interesting than others, but there's no real indication as to why they were removed in the first place. It's just a pity there's no audio commentary to accompany them, let alone the film. Also included is a short featurette containing some Behind the Scenes footage along with a number of Outtakes. It's all rounded off with the Theatrical Trailer.

The One and Only is another film which has been part funded thanks to lottery money. With this kitty now closed to new projects it looks like home grown films, along with the British film industry, will yet again become a rarity. Panned by the majority of the British review press The One and Only disappeared off the box office radar without a trace. Never the less it is a really underrated film and it just goes to prove that the majority of the press are totally out of touch with what the public do and don't like in their films. Quite why it received the negative reviews it did is something I still find a little odd. The entire cast is excellent, even the rather chubby looking Patsy Kensit, but the films highlight is Richard Roxburgh's easy going Neil and his slow emergence as a reluctant father to Mgala.

OK, so the film may not be to everyone's taste and I have a feeling it will find its niche on terrestrial television, but if you can't bring yourself to purchase a copy of this film then you should definitely consider renting a copy. You may be pleasantly surprised with the results.