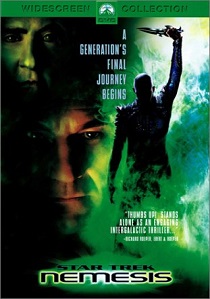 William Riker and Deanna Troi have finally tied the knot and with the first part of the traditional wedding celebrations performed on planet Earth the crew of the Enterprise head for Troi's home world of Batazed where a traditional, and naked, wedding awaits. However, on route to the planet the ship picks a strange positronic signal from a planet just inside the neutral zone. With the signal only being emitted by androids similar to Data the crew decide to take the risk and investigate.

Landing on the planet the away team soon start to find bits of an android baring a remarkable likeness to Data. After a quick, and violent, introduction to the local population they head back to the Enterprise and set about rebuilding the android. Upon completing the reconstruction Data discovers that his "brother" is called B4 (good name eh?!) and that his positronic brain is no where as advanced of his. But even more puzzling, B4 has no idea as to how he arrived on the planet.

With B4 back together, and asking a continuous stream of questions like an inquisitive child, the Enterprise receives orders from Starfleet to head to Romulus and meet with their new Remun leader Shinzon for urgent peace talks. With nothing known about Shinzon, and even less on how he became leader, the Enterprise heads to Romulus as the first Star fleet starship to orbit the planet. Do the Romulans really want to discuss peace or is there something more sinister at work?

Meeting Shinzon for the first time Picard is surprised by how much he looks like himself. On further questioning, and sample of DNA, Shizon is shown to be a clone of Picard. Shizon reveals that he had been created by the Romulans as part of top secret project to replace Starfleet's best captain, but when a change of government cancelled the project Shinzon was sent to the mines of Remus to die. However, whilst in the mines he looked after by the other prisoners and survived to take his revenge. Now Shizon is dieing and he needs Picard in order to survive and Picard is going to help him, whether he wants to or not.

For some reason, the quality of picture on the recent Star Trek motion picture releases have been rather poor. This has been especially evident in the region two release. Fortunately, this region one release has a picture which is high in detail and rich in colour. The picture is free from any signs of dust scratches or other imperfections and the bit-rate remains above average throughout. Some of the CGI effects can be a little poor with subtle signs of outlining, but this only tended to be a problem when CGI was mixed with live action footage. Perhaps the budget for the special effects was not as high as it should have been or that too much of it was spent on the space battles.

The sound is good enough with clear and precise dialogue and plenty of activity in the surround channels and rumbles from the LFE channel. However, the effects channels only tend to be used during the battle scenes whilst other ambient sound effects tended to be forgotten about. Fortunately, the battle scenes do make up for this and when Picard finally goes head to head with the Romulans, the entire soundstage is a hive of laser blasting and photon torpedo firing activity.

For a standard Star Trek release the collection of extras is actually rather good, although the director's audio commentary track can hardly be described as being the most exciting around. However, fans of Star Trek will find his ramblings interesting enough to at least warrant a listen to once. It's just a pity the cast couldn't offer anything, especially with it being their last film together. The four featurettes are interesting enough and go behind the scenes of the Star Trek universe, including details on the set designs and the action sequences. Naturally, there's the usual pat on the back interviews with the cast members, but you certainly get the impression that they all get on together well and form a good family bond.

The highlight of the extras would have to be the deleted scenes. Whilst you can appreciate that some scenes were cut for time, a scene containing the introduction of a new first officer should have remained. Each scene is introduced by the various cast members and director Stuart Baird also mentions that the original cut of the film ran for nearly 2 and half hours. With the deleted scenes running for about 15 minutes there's plenty of material being kept back. I have my suspicions that a director's cut will be released in the not too distant future with plenty of detailed interviews with the cast and crew.

Space exploration has certainly taken its toll on the crew of the Enterprise. They've taken their motto of "To Boldly Go" a little bit too seriously as they've all become rather chubby! I'm surprised half of them could manage to reach the control panels with their Romulan beer bellies protruding out like some sort of massive orbiting space port. Things get even worse during the close ups and their expanding collection of wrinkles. Deanna Troi looks like she's about to fall apart! If this is what space travel does for you in the future then, thanks, but no thanks, I stick to planet earth.

There's no doubt that Trekkies will love this film, but the casual Star Trek viewer may be a little confused and disappointed with a film that bares a striking similarity to The Wrath of Khan. I also detected a case of every major cast member having to have a some sort of dramatic scene in the film. They were all there, Troy being "mind raped", Picard and his ridiculous dune buggy, Riker being a chubby hero in the turbo shaft and Data singing (if that's what you want call it) to name but a few. They just ended up being like mini-stories within a larger, and rather pointless, plot. I definitely think it was a case of egos ahead of script.

Although it sounds like I'm being over critical, there are actually good bits of the film. I always like a good Star Trek space battle and Nemesis offers one which is certainly on par with the likes of The Wrath of Khan and First Contact. Mind you, some of the dialogue manages to be so cheesy you'll be coughing up your popcorn and sneezing beer down your nose with such classics as "They'll call that the Riker manoeuvre" Oh, Please!!

Nemesis is a hard film to call. It was always taken for granted that the even films were the best, but this one is far from being a classic. Unfortunately, it results in the final swansong for the present crew of the Enterprise being a bit of a disappointment. However, judging their physical state and advancing years it was probably a good time to call it a day. The only problem for Paramount now is to find a replacement. Will there be a new Star Trek franchise, or is it to be the turn of the crew of the television series Enterprise to boldly go and expand their waistlines and pay cheques?