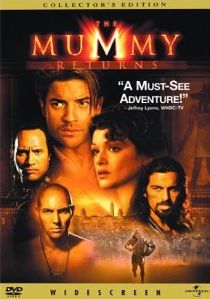 ReviewHorrorAdventure
Review Article Go back to homepage
A mysterious group dig up Imhotep's remains from the city of the dead and bring him back to life in order to rule the world.
Brendan Fraser, Rachel Weisz, John Hannah, Arnold Vosloo, Oded Fehr, Patricia Velazquez, Freddie Boath, The Rock, Adewale Akinnuoye-Agbaje
Action/Adventure, Horror
1
2 Hours 10 Minutes
Thank you for supporting DVD365.net when you order using the link(s) below.
Buy DVD
Story

Its been ten years since Rick and Evelyn sent Imhotep back to the underworld and a lot of things have changed. For a start they have become husband and wife and they have an eight year old son Alex. This new family arrangement has not stopped their travels and they continue to explore the ancient ruins of Egypt searching for a mysterious bracelet Evelyn saw in a strange vision. Surprised by the accuracy of her vision Rick and Evelyn soon locate a temple dedicated to an ancient evil where the bracelet of the Scorpion king is kept.

In the meantime, a mysterious group have located and unearthed the remains of Imhotep and, together with the book of the dead, they take him back to London where he is to be resurrected. The same group is also shadowing the O'Connors, ready to pounce on the family once the bracelet is located, for only they know its true origins and its devastating powers and how they can be controlled.

When the family returns to England, young Alex tries on the bracelet and he unwittingly starts a chain reaction that will unleash the armies of the Scorpion king on the world. With the bracelet unremoveable from his wrist, Alex is kidnapped by the group and taken to Egypt where he is to be used to lead them to the Scorpion kings resting place. However, Rick, Evelyn and some old friends are in hot pursuit.

The picture is first rate with some fabulously rich and lush colour tones and blacks so dark that you could be looking at the voids of outer space. The plentiful amounts of computer animation and real life scenery blend in perfectly together without the slightest hint of outlining, colour bleeding or pixelisation. Even the dark and gloomy scenes within the various tombs are handled perfectly without any signs of graininess.

The sound department is just as good as the picture with some excellent use of the surround channels and LFE's during the all important action phases. The dialogue is locked and clearly audible in the centre channel and once the action kicks in there is no need to dive for the remote control to appease the neighbours. Universal have recently released titles with both Dolby Digital and DTS soundtracks but unfortunately this title lacks the DTS soundtrack. However, with the large number of extras and director's commentary there may not have been the room to accommodate them both.

The extras are excellent with plenty to keep even the most picky of DVD owners happy with one of the best features being the outtakes section. It has been turned into a wonderfully presented montage and rather than just showing the actors falling about laughing they are shown goofing their lines or breaking the props. It must be one of the best outtake sections available on any DVD and worthy of the price of the disc alone.

Most of the other extras are good with a useful directors commentary and, similar to the first film, an interesting Egyptology section. The interview with 'the Rock' plus the preview of his new (and pointless?) film isn't going to excite too many people. I'm sure the hype behind this 'actor', and his very little screen time, will baffle most non-Americans who won't even have a clue who he actually is.

The menu system is superbly animated with plenty of haunting sounds and is most probably one of the best menu systems available on DVD to date. As each menu selection is made you move through an Egyptian tomb before being presented with another menu.

More often than not the sequel tends to be poorer than the original and, yet again, this is the case here. This film is yet another Hollywood production that has been created to extract as much money as possible from the viewing public without much though for a storyline.

Where the script fails the special effects normally take up the slack. Although the effects are good, there is such as thing as going over the top. There are far too many effects and the computer generated images spend more time on screen than the actors. Mind you, these images blend in much better than the other recent computer intensive epic Star Wars, and if anything the picture quality here is better and I'm sure it is destined to be used as demonstration material - especially for plasma televisions.

So, if you can divert your attention away from the extremely annoying boy (quite easy when Rachel Weisz is on screen), the pointless hype over 'the Rock' and you enjoyed the previous Mummy outing, then you might just enjoy this one. However, before you part with your hard earned cash, bare in mind that Universal released an 'Ultimate Edition' not long after the release of the first film. I just wonder how long it will take for them to release one this time around?