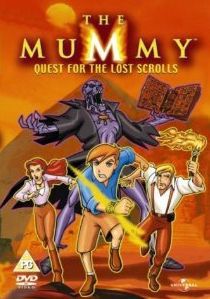 Alex O'Connell has a fantastic imagination and boundless curiosity. Alex possesses the best, and sometimes the worst, traits of both parents. Home-schooled by Evy, he knows ancient histories and languages like modern kids know Pokemon cards. But he's no bookworm. Alex also inherited his father's brashness, sense of humour and adventurous spirit, and frequently these traits will get him into hot water.

He is smart and witty, but not cocky or sophisticated. In a dire situation, Alex is often scared and vulnerable (like any eleven year old would be), but overcomes his fears to show the strength of his heroic character. Like a young Rube Goldberg, Alex is also a mechanical whiz. He rigs up unique devices using objects he finds from his environment to get the family out of precarious situations.

Alex possesses poise and humour beyond his years, but remains pure kid at heart. He still has kid-relatable problems like homework, lack of friends and issues with mom and dad…he just has to deal with them while being chased by ghouls, gremlins and zombies.

Evy O'Connell is British, and attractive. She's the formally educated, intelligent, strong-willed, albeit slightly clumsy, matriarch of the family. She speaks with an ever-so-slight English accent, is fluent in several languages, and can decipher any ancient text. Upon first impression, one might call her "refined," yet that notion will quickly dissipate once you see her battling a creepy ghoul.

That's because Evy is fueled by a passion for knowledge, no matter what the cost. She loves being an adventurer, a curator, an Egyptologist, and, of course, a wife and a mom. She's very protective of the men in her life, in fact a bit overprotective of Alex (if you ask him) but that doesn't mean Evy is always the strict parent.

She's so focused on the task at hand, she often doesn't see the world around her. If she's hot on the trail of a particular antiquity inside a cave, she won't see the bottomless pit right at her feet or the swarm of bats above her head. Luckily, Rick is often there to bail her out. But don't think she is some helpless waif; Evy can hold her own against the most hostile of the undead using her wits, grit and skills.

Rick O'Connell is a man of action, but in reality, all he wants to do is kick back and relax for once in his life. Cool under pressure, Rick is also very imaginative. Thus he can turn a tree branch into a jousting weapon or pick a lock with one of Evy's safety pins. A big kid at heart (with the wonder and innocence that occasionally brings), the guy's learned a lot on his travels, but is never boastful about it. Rather he just always seems to find another rabbit to pull out of his hat.

Rick is very proud of Alex, and although the role of disciplinarian often falls on his shoulders, he can't help but smile to himself with fatherly pride when admonishing Alex for some death-defying move. While Evy is often the "intellect," Rick is the "throw a roundhouse punch first, ask questions later" sort of guy. Sometimes it's easier just to kick butt rather than come up with the right spell to send the undead back where they belong.

In the Quest for the Lost Scrolls, Alex finds himself in trouble when he accidentally locks the newly discovered 'Manacle of Osiris' onto his wrist. This unfortunate mistake leads to a desperate race against time, across the globe, as Alex and his parents search for the Sacred Scrolls of Thebes.

However, whilst the Scrolls hold the secret to unlocking the Manacle, the O'Connell family are not the only people desperate to find them. Imhotep, the mummified spirit of an evil Egyptian high priest, is also hot on the trail keen to get his hands on both the bracelet and the Scrolls so that he can harness its power to rule the Earth.

Being an animated feature there's really very little than can wrong in the picture department. Typically over top with colour, the animation is rich and colourful with plenty of detail. There's certainly no sign of any picture imperfections or edge enhancements and the high bit-rate throughout ensures that there's also no sign of any artifacts.

The sound is rather disappointing and it certainly shows its roots and its ultimate viewing destination. The pro-logic soundtrack is uninteresting but perfect for the television airwaves it is sure to grace. It's a great shame that the soundtrack can offer nothing to tease your surround system, but I'm sure that the kids will be more than happy with the results and won't be bothered about surround sound - it's only the big kids amongst us which will be grumbling.

Like the disc, the extras are definitely aimed at the younger end of the market. If you want exciting Behind the Scenes Featurettes and Audio Commentaries then you're going to be sadly disappointed. However, the kids will be more than happy with the Trivia Challenge and the Egyptology Text information. And perhaps if they are still interested in the subject matter then you can introduce them to the feature films and their excellent sets of extras.

Does the storyline sound familiar? Well it should as its basically a rehash of the feature film The Mummy Returns. Along with dinosaurs, mummies seem not to terrorise, but excite and fascinate younger children and whilst the live action films may have been a little too much for the younger family members, this animated feature is sure to keep their attention long enough for you to carry out that much need household chore.

Universal have rightly realised that the Mummy franchise was perfect for the animation treatment and this film is surely a taste of many Saturday morning cartoon features to come. The entire O'Connell family is back along with a number of new characters and a friend of Alex's who looks suspiciously like Harry Potter. Whilst older viewers will be able to relate back to the feature films and be somewhat disappointed with results, the younger children are never the less sure to love it.

From the parents perspective, this film looks like a number of shorter episodes in a series which have been spliced together in order to create a feature length film. My suspicions were raised when the narrator kept mentioning the O'Connell's many adventures as they tracked down the scrolls and avoided Imhotep. Seeing only a fleeting glance of their many battles with various bandaged nasties and monsters had me struggling to keep pace with the goings on.

Also, watching this animated feature brought something home to me about American actors and actresses. They can't do British accents for toffee. Please, if you want an British plumb accent then employ a British person to do the voices in future!