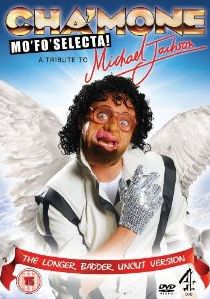 Originally broadcast on Channel Four, Leigh Franics is back for one last time with one of his most famous latex masks (or in the case of Michael Jackson - a wide range of masks to match his many facial changes) with Cha'mone Mo'Fo'Selecta! A Tribute To Michael Jackson. With more material than originally broadcast, it includes a whole host of brand new latex faces including the likes of Diana Ross, Uri Geller (with a rather fetching cat on his head), Simon Cowell and Ken West (a Yorkshire version of Kanye West - the US rapping star with weird sun glasses), as well as the usual Bo'Selecta! favourites of Craig David, Mel B and The Bear.

Together they all reminisce in their own special way about the life and times of Michael Jackson. The show takes a chronological look at his unusual lifestyle and his amazing musical career, including some hilarious spoofs of the Thriller (including a take on the original "making of" featurette with John Landis), Bad, Beat It and Billy Jean music videos. But it's not all rubber masks as there's also special guest appearances from ex-Spice Girl member Emma Bunton, Peaches Geldof, Paddy McGuiness and the permanently surprised looking David Gest.

Filmed at rather short notice, and no doubt on an extremely tight Channel Four budget, the picture quality was never going to rival a Hollywood blockbuster or the likes of Lost. Never the less, there's still nothing wrong with the quality here (even the deliberately "distressed" images from Jackson Five's early days look convincing) and the brainwashing colours of Can't Stop Until You Get Enough "video" are handled with ease by the DVD and give a good indication of the quality of things to come. And, as you'd expect for a television series, there's no print damage whilst there are no real issues with grain or pixelisation.

Due to the bandwidth limitations of a terrestrial television broadcast there is very little to be expected from the sound department. Still, the 256Kbps Dolby Digital 2.0 soundtrack is more than sufficient for its needs and it manages to present some crisp and clear dialogue throughout. Put this together with the image quality and you have a rather good presentation and it all begins to add up to a very respectable package indeed.

The main menu is scored and animated with a gyrating Michael whilst the submenus are also animated and scored with clips from the show. Extras wise, given the relatively short running time of the programme, when put into the context of this release, there's more than enough to keep fans of the show happy with an Audio Commentary, Behind-the-scenes Featurette, Deleted Scenes and a rather amusing set of Outtakes. I think you'll agree, this all makes for a rather good value release.

The first of those extras is the Audio Commentary with Leigh Franics and producer James De Frond. I expected this yack track to be nothing but Leigh acting stupid or remaining in character throughout, but it was far from it. Both Leigh and James provide plenty of information about the show's production, the new characters and the various sets (or rather people's back gardens!) and they're forever mentioning the tiny amount of money they had for the show and how everybody helped make the show a reality. It really is a cracking commentary track which puts many a Hollywood one to shame.

Next up is the twenty-eight minute Behind-the-Scenes Featurette. In it, Leigh Francis talks about how he learnt about Michael's death before deciding to do a tribute show. He ponders about how he brought the original cast and crew back together again and it goes right behind the scenes of the filming process, in make up and on set of the videos. It's all interesting stuff and it also shows just how mad Leigh is once he's on set and in character. I'm betting it was enough to drive any crew member mad!

Next up are the seven minutes worth of Bloopers. A programme such as this relies on plenty of adlibbing but there is an underlying script with Leigh occasionally struggles with as he falls about laughing or fluffs his lines. I don't usually like outtakes, but the set included here is actually rather funny and I found myself laughing along with the foul ups too. The final extra is the thirteen minutes worth of Deleted Scenes. Unfortunately, the scenes can't be individually selected, nor are there any explanations as to why they were removed, but ignore any reasoning and simply sit back and continuing laughing at the on screen madness.

People were probably a little confused by this programme original broadcast on E4 and the many fans of Michael Jackson who tuned in for a glowing tribute were rather horrified by Leigh's on screen antics. Sure, Bo'Selecta is not for the easily offended in the first place, but his portrait of a profanity strewn Michael Jackson would have had Michael's hardcore fans completely shocked, and fainting in their hundreds, by what they saw. Still, that doesn't mean that Leigh didn't like Michael as in both the Behind-the-Scenes featurette and the final moments of the programme, it's obvious he respected him a great deal.

If you're a fan of the show then there's no doubt you're going to love this tribute DVD. Leigh's comedy has simply picked up from where the final series of Bo'Selecta left it and the Behind-the-Scenes featurette and the rather amusing Bloopers give the package an all important boost in the value for money stakes. If you consider that many other television to DVD releases offer very little, if nothing, in the extras department, Leigh Francis and his dedicated crew deserve a hearty pat on the back for their efforts.

So, if you're a fan of Bo'Selecta then this DVD is a worthy addition to your collection (it's worth it just for those wonder spoof videos!) whilst, unless you've had a satire bypass, all Michael Jackson fans should give this one a rather wide berth.