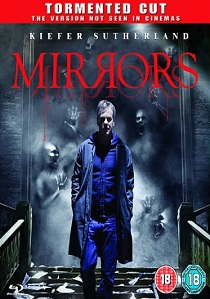 ReviewHorrorThrillerKiefer Sutherland
Review Article Go back to homepage
An ex-cop and his wife and children are the target of an evil force that is using mirrors and reflections as a gateway into their home and lives.
Kiefer Sutherland, Paula Patton, Cameron Boyce, Erica Gluck, Amy Smart, Mary Beth Peil, John Shrapnel
Horror, Suspense/Thriller
B
1 Hour 46 Minutes
Thank you for supporting DVD365.net when you order using the link(s) below.
Buy BD
Story

Disgraced NYPD officer Ben Carson has alienated himself from his family and friends after a tragic accidental shooting of an undercover police officer. Resorting to a life of looking at the bottom of an empty whiskey glass and eventually being thrown out by his wife and losing his job, he is desperately trying to rebuild his life. So when a job becomes available as night security guard at the abandoned Mayflower department store he jumps at the chance. Desperate to show his wife and child that he's not a lost cause, this less than challenging job is the perfect starting point to help get his life back on track.

Nearly destroyed by a mysterious and deadly fire, the once grand Mayflower store has been left to decay, with only the pristine mirrors (lovingly cared for by the previous security guard) retaining some of the shop's former grandeur. As Ben carries out his nightly duties, the hundreds of mirrors that adorn the walls start to reveal the tragic past of the building and its inhabitants. Confronted with terrifying and gruesome visions of human anguish in every reflection Ben begins to discover the truth about the Mayflower's terrible history and his predecessor's untimely departure from the store. But as the revelations become more horrific and begin to manipulate reality, Ben becomes locked in a desperate battle for survival to save his family and find redemption.

The dark and gloomy interior scenes of the fire damaged department store are very impressive on the Blu-Ray format - which, according to some other reviewers out there, is in stark contrast to the rather poor standard definition version. The impressive camerawork is made all the more remarkable by the wonderful set in an unfinished building in Rumania and the near perfect black levels, with a blue filter heavily present throughout, that make you almost taste the charred remains of the building. Sure, there is the occasional scene where grain appears to be a bit of a problem, but on the whole it's a good transfer with a good range of colours and solid black levels. Still, it's not the best advertisement for high-definition on Blu-Ray, but I'm sure that there's worse transfers out there.

Whilst the quality of the transfer is not from the top drawer of Blu-Ray titles, the DTS-HD Master Audio 5.1 soundtrack is a definite improvement and there's a good collection of ambient effects that'll have you looking around you as the effects cross from one channel to the other. The dialogue is crisp and clear in the centre channel whilst there's a number of LFE effects to rattle the walls and annoy the neighbours. Also, whilst it's not the most dynamic or memorable score you're ever going to hear, the Javier Navarrete musical score does at least manage to add a bit of drama to the proceedings. Although I don't even know whether the equipment is available in the UK, the soundtrack is also enhanced for D-Box Motion Control Systems so your terrified emanations can be excused with the D-Box.

Before you get to the menu system you're offered the choice of viewing either the Theatrical Version or Unrated Version (which is a bit of a joke really as the BBFC are unlikely to ever allow an unrated film to find the light of day on DVD). Once an option is selected you can still change your mind via the Special Features option, but with the animated (with clips - and its mirrored reflection - from the film playing in the background) and scored menu system using the same mirror reflections as the menu selection indicator it may take you a while to find the menu cursor and navigate around the menus. It may sound stupid, but it can actually be rather confusing and not at all obvious.

Extras wise, there's a good collection on offer with Featurettes, Deleted and Alternate Scenes, a Picture-in-Picture Commentary from Alexandre Aja and Gregory Levasseur and a number of additional Featurettes - all of which are available with subtitles. This collection certainly adds some much needed value to the disc and helps reveal the high production values required by a team with a limited budget at their disposal. As with most extras, unless you want to plot to be spoilt, they should be avoided until after watching the film.

The first of those extras is the BonusView Picture-in-Picture Commentary. Given that Alexandre Aja is not the world's most prolific or well known director, both he and Gregory Levasseur have plenty of time on their hands to provide a detailed and insightful chat track about the film. The information they provide - both about the script and the rather amazing locations and budget (but very effective) special effects - is very informative with hardly a break in their chatter with the various portions of Behind-the-Scenes footage worthy of watching too. The Picture-in-Picture Storyboard Comparison, which intermittently shows a small image of Alexandre Aja's storyboards over the lower-left-hand portion of the screen, is also part of the BonusView features. However, it cannot be viewed in conjunction with the main commentary track which means that multiple viewings will be required to get the benefit of both features.

The first of the featurettes is the five minute Anna Esseker Hospital Footage. Shown as an aged film (with the same clips appearing through the film) it silently follows Anna on her way to the mental institute and the harrowing time she has during her stay. With plenty of clips from the film and behind-the-scenes footage galore, the forty-nine minute Reflections : The Making of Mirrors offers an interesting in depth look at the making of the film. However, this featurette is more or less the same information repeated from the Picture-in-Picture documentaries on the commentary track so, depending on whether the BonusView features annoy you, you'll be able to opt for one or the other without missing out on any information. As a Making Of feature, you won't find much better than this one and it almost makes it worthy a purchase just for this. Cracking stuff.

The featurettes continue with the eighteen minute Behind the Mirror featurette. Including more clips from the film it suffers from a bit more of the PR fluff than the main Making Of featurette. Never the less, it's still a reasonably interesting look at the various folklores and legends behind those mirrors you don't think about using. After all, have you ever looked in a mirror in a bathroom where there's another mirror behind you - giving you a vision of infinity and wondered just who (or what) is looking back at you? Is it creepy, or just plain weird? The short Animated Storyboard Sequence looks at a particularly disturbing part of the film - I won't tell you which part because it will spoil the film. Never the less, being so brief it's hardly worth looking at - although the actual scene does follow it quite well.

Given the length of the film it's surprising to find quite a large selection of Deleted and Alternate Scenes. Available with an optional Audio Commentary (plus subtitles) and either viewable in one go or individually selected from the menu, the collection runs for sixteen minutes. Although the images are good quality, they are not complete and a small amount of scenes contain green screen backdrops. With the benefit of the audio commentary you'll discover that the scenes were mainly cut for pacing purposes or unnecessary or over revealing plot information. Alternate scene wise, there's also a few interesting changes which were filmed for the film studio to offer an alternate ending whilst there was the possibility of a nice plot twist. Things are rounded off with a rather pointless link to Twentieth Fox's websites for the US, UK and Australia. I'd hoped you could select it and, being Blu-Ray, it would open up a browser window but, alas, it just tells you to visit their site.

Hollywood's love of remakes, especially the horror genre from Asia, continues unabated with Mirrors being a remake of the 2004 Korean Film Into The Mirror. Unfortunately, after being bitterly disappointed with other Hollywood remakes such as The Ring, The Eye and The Grudge I wasn't expecting anything special here. In a way, keeping my expectations so low was probably a good move as Mirrors can't be classed as one of the greats either. Sure, there's a nice and gory scene with Amy Smart that probably had the censors in palpitations (and probably why the DVD is an 18 certificate) but, other than that, there's very little to move the hairs on the back of your neck. So, as usual, it's yet another poor attempt from Hollywood at scaring the living daylights out of us.

The inclusion of a number of interesting, and lengthy, extras certainly adds value to the release and it goes some way to help rescuing the package. Never the less, it's still not one of the best films you're like to get on Blu-Ray and it doesn't offer anything special over the standard release and the extra pounds you're expected to shell out. Even the legions of Kiefer Sutherland fans may want to pause for a moment before considering a purchase - after all, this is no extended episode of 24. Still, whilst it's probably not worthy of a purchase it's certainly worth a punt at your local rental store.