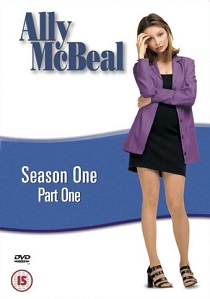 Ally McBeal is a young lawyer and one of the many young women of the nineties who stood up and wanted to be noticed. She has just got herself a job as an associate at Boston law firm Cage/Fish & Associates which also happens to be run by her old class mate Richard Fish. Everything about the office is care free. Everyone gets along fine and they even have a unisex toilet. It may be unsettling for some, especially when Richard Fish is digesting his daily bran muffin and John Cage is practising his dismount from the toilet, but it is a focal point for their conversations and there is always someone listening in or stood behind someone when they are being talked about.

Ally is over the moon with her new job and has everything she ever wanted; except one thing - Love. In her younger days she had a long term boyfriend called Billy Thomas who always wanted to be a lawyer. Although Ally had no ambitions to be a lawyer she followed her heart and Billy through law school. But Billy and Ally eventually went their separate ways and they slowly drifted apart. However, Ally is in for a big shock when upon turning up for her first day at work she discovers that the now married Billy works at the same firm and his wife, Georgia, is an absolute stunner. Things are going to be difficult, especially when Ally realises she is still madly in love with Billy and intensely jealous of Georgia.

Richard Fish and John Cage run the firm and they couldn't be any more different to chalk and cheese. Whilst Richard speaks his mind, and has a bizarre obsession with chin 'waddle', John is very methodical and intriguing with his approach to a case and will sometimes resort to props in order to distract the opposing councillor. Richard is outspoken and once in court he'll soon be chomping at the bit and being totally un-PC (and he does occasionally have a very good point!). On the other hand, John likes to take his moments before producing a killer argument and closing speech. John has never lost a case and it's something he's very proud of.

Elaine Vassal is the office secretary and if there is anything to be learnt about an office relationship then Elaine is the one to ask. With her many listening devices and methods, if there is a secret to be kept then you can be pretty sure it won't remain such for too long. Elaine is also a bit of a whiz when it comes to bizarre cosmetic inventions. Renee Raddick is Ally's long suffering room mate who tries hard to advise Ally on her love life. However, Renee spends most of her time listening to Ally's many rants and complaints about men and her failed relationships. Renee is also a district attorney so Ally and Renee frequently come up against each other in court.

For a television series, and an NTSC to PAL conversion at that, the picture is remarkably bright and colourful with a reasonably high level of detail and texture. It's certainly not in the same league as a Hollywood block buster but it still manages to puts many other television series on DVD to shame. However, that's not saying that the picture is perfect as the contrast level can a little on the high side at times and grain can also be a problem. Fortunately the bit-rate remains high throughout and there are no signs of artifacting or outlining. The only real shame is that the picture is full frame and not widescreen. Mind you, I guess we got the same print as used for the standard terrestrial broadcasts.

With the material being created for television broadcast the sound is hardly going to give your surround system a massive workout. But then again, you wouldn't really be expecting too much in the way of surround effects. Never the less, the use of the stereo channels is very good and the dialogue is audible at all times.

Where the series does fall flat on its face is in the extras department. There aren't any, and there won't be any for a season or two. Where is a making of documentary or commentary from the director or cast and crew? There is a large fan base out there so it really was a missed opportunity to give the loyal fans something back. As well as being another television series without a "play all" option the menu system is a static and silent affair with nothing exciting to offer. The only real redeeming feature is that you can quickly put these grievances aside and enjoy the programming on the disc.

Ally McBeal is a brilliant series. Who would have thought that a programme about lawyers could be so funny? Although the series is based around Ally's troubled love life, and her rather bizarre fantasies which would have most people locked up for their own good, it is the entire cast that really makes this series shine. In fact, Peter MacNicol's wonderful character John Cage could even have a series of his own. His wonderful one liners, mannerisms, his remote control toilet flusher and a nose that whistles at the most inappropriate moments really does make me laugh out loud.

With over sixteen hours of programmes to watch it is no surprise that the box-set is split into two halves. Whilst the initial DVD releases were quite expensive you can now get half a season for around £15 and, if you're really lucky, a complete series will be available in a "buy one, get one free" offer. So there really is no excuse not to get your hands on this gem of a television series. It has brilliant scripts, fantastic one liners and some superb acting from the entire cast. What's more, it's side splittingly funny, it's touching, it's serious and on occasions all three at the same time. The only disappointment is the total lack of extras.