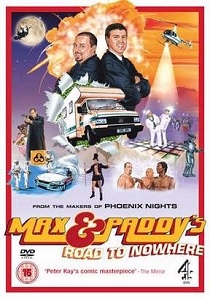 Max and Paddy's Road to Nowhere is the much-loved sequel to Peter Kay's multi-award winning, critically acclaimed comedy series, Phoenix Nights. Written by and starring Peter Kay and Patrick McGuinness, this six-part comedy drama series veers off at a slight tangent and follows Phoenix Night club bouncers Max and Paddy as they escape club land in their prized motor-home which was bought with money from a gangland style hit. Unfortunately for the boys, they couldn't carry out the task and they went on the run with the van and the remaining money whilst leaving a rather irate wife with her still living husband.

The DVD of the complete series follows all their exploits, including Paddy appearing in a gay porn video, an Irish man selling plasma televisions, a road traffic accident with a cow, a rather flatulent pig, a dodgy car mechanic who'd rather relieve them of their money than fix the van and Max discovering that he has a young son, the product of a brief but intense affair with Tina, a 'small person' now married to one of Max's old school friends. However, this revelation kick-starts a series of events in which they accidentally hijack a school bus and, as a consequence, endure a rather uncomfortable spell in one of Her Majesty's Prisons where Paddy fears "a bumming". This in turn inspires a 'free Max and Paddy campaign' masterminded by none other than Brian Potter, owner of the Phoenix Club who, as usual, has a money making scheme at the heart of things.

As a television series originally commissioned and broadcast on Channel 4 there was never going to be anything special about the picture quality. Still, Channel 4 have a knack of delivering the goods when it comes to home grown material, even if it does look like the series was filmed on a fairly tight budget.

Overall, the picture is of a reasonable quality with a good range of colours but it has, rather unsurprisingly, a definite television look to it. Whilst the transfer is clean and free from signs of artifacting or outlining the transfer is a little soft and suffers from grain. As a result, given what Channel Four have produced in the past, it is a slight disappointment. Another rather annoying "feature" is that the commercial break point has been kept in during each episode so you always get the "end of part one" break. Quite why this has been retained on a DVD release is beyond me and it's something that the distributors should really address.

Again, given that the series was broadcast on Channel Four, like the picture, the sound department was never going to be anything particularly special. Still, without any requirements for dramatic and explosive effects, the rather simple 224 Kbps Dolby Digital 2.0 soundtrack manages to entertain well enough with the musical score playing a dominant role throughout along with some crisp and sharp dialogue. Given that this is a disc which is more than happy being played through your standard television speakers, you can save yourself a few pence in the electricity and dispense with the surround system for this one.

Once you get past the overly long, albeit rather funny, introduction screen, the menu system is cleverly animated with plenty of road signs and scored with each episode given its own animated set of menus with clips from the episode playing in the background. There's also a nice transition effect between the menus. Extras wise, it up to Peter Kaye's usual high standards with the Outtakes section being the pick of the bunch, whilst there's some additional features which I can't possibly tell you about.

First up are the twelve minutes worth of Deleted Scenes. Although there is no explanation as to why they were deleted, the majority will have been trimmed for pacing and timing purposes in order to get the show to fit into its half hour television slot. Although some scenes run for literally seconds some do have some baring on a few of the shows plots so they're all definitely worth a look, plus there's a few laughs to be had too. Next up are the twenty four minutes worth of Outtakes. Whilst blooper reels can sometimes be as funny as a heart bypass operation, the simple fact that it contains Peter Kaye and his equally funny cast members makes it well worth a watch, with the highlight being Max trying to get his collapsible cups to stay up. However, this exclusivity has been somewhat diminished by Channel Four screening the outtakes as a special feature. And as with the DVD release of Phoenix Nights, viewers with very delicate ears you can also watch with the swear words bleeped out

With the main extras out of the way we're left with a one and half minute set of Trailers for the series plus one minute and forty seconds worth of automatically advancing publicity stills in a Gallery set to music. They're nothing special, but with Peter Kaye's cheeky grin on nearly every picture, they round off everything quite nicely indeed. All in all, it's a good selection of extras which fans of the series are sure to enjoy, which are made even better with subtitling available throughout.

After the side splitting antics of Brian Potter and the Phoenix Nights club, followers of Peter Kaye will overjoyed with this DVD release. Whilst critics complained that it wasn't as funny as Phoenix Nights, it was always going to be tough act to follow. Still, some of the episodes are weaker than others, but on the whole there's plenty to laugh at in every episode, with the opening episode probably being the pick of the bunch as the pair practice their dance moves and don sailor outfits to impress the girls. There's even a poignant moment later on in the series when Max discovers that he's a dad, although Paddy is his usual straight to the point self with his usual collection of wise cracks.

It may not be a release which will break records as fast as Peter Kaye's other DVDs, but it's still bound to sell by the bucket loads and be a top comedy seller of 2005. Still, some of the shine of this release has been taken off by Channel Four heinously broadcasting the series outtakes ahead of the DVD release. Never the less, it's still one heck of a hoot with plenty of film references to make you laugh. I just hope that Peter decides that his Mum really does need that indoor swimming pool for her bungalow and hits the road again with a comedy tour. In the mean time, Max and Paddy's Road to Nowhere fills a very good gap indeed. Highly recommended.