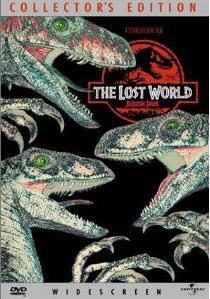 When a young English girl has the misfortune of stumbling across 'Site B' on Isla Sorna, a breeding island 87 miles south of Isla Nublar, John Hammond assembles a four man team to visit and document the area before it is exploited. John asks the now ridiculed Dr. Ian Malcolm to go to Isla Sorna but, for obvious reasons, he objects. However, when he discovers that his girlfriend Dr. Sarah Harding is already on the island he changes his mind.

When the team reach the island they soon discover that InGen, the bioengineering company behind the original island, have already arrived and are already plundering the wildlife. However, Ian is in for an even bigger shock when he discovers that his daughter Kelly has stowed away and joined them on their mission.

The group sneak up to the the InGen camp and free the captured dinosaurs which then run-amok through the camp trashing all of their equipment. Things then take a turn for the worse when Sarah Harding brings an injured T-rex youngster back to their own camp and its parents come looking for it, trash all of their equipment and then snack on one of the members. With both camps destroyed the two groups must join forces and attempt to head through dinosaur country in order to reach a radio and safety.

Similar to Jurassic Park, the picture is bright and colourful, with a high bit-rate throughout with no signs of outlining or artifacting, although there was quite a lot of picture noise during most of the film. This is especially evident during the night time scenes on the island, and for a much newer film than the original, I was surprised by the glitches in the picture.

However, the sound is no disappointment and certainly out does the original. Again, the DTS soundtrack is superior to the Dolby Digital version, but only down to the channel separation, which, in my opinion will always beat a Dolby Digital soundtrack. From the moment they reach the island the rear channels are rarely idle and there's plenty of LFE's, again mainly from the approaching and attacking T-rex.

There are plenty of excellent one-liners from Jeff Goldblum which refer back to his previous meetings with the dinosaurs on Isla Nublar. It is only his character, and performance, that keeps the film from just being a CGI dinosaur extravaganza created to empty the pockets of the cinema going public.

One thing which really confused me in this film was Ian Malcolm's daughter. She just seemed to be a rushed in afterthought, be it because there were no children featured in what is a film basically aimed at a younger audience, or, and I bite my lip when I say it, because there were no black actors in the main cast.

Again, as with Jurassic Park, this region one disc only contained the DTS soundtrack, although a Dolby Digital version is available. In order to accommodate the DTS soundtrack the extras have been sacrificed. Whilst this was acceptable for Jurassic Park, I'm not so sure that this film justifies the sacrifice as without the additional extras it looses some of its value for money.

Yes, the animatronics are good, and the CGI's impressive, but there are so many stupid cover-ups in the story to allow the sequel. Also, after all the fuss made about the approaching T-rex in both the original and sequel, how can it wander through San Diego in the middle of the night without a single person hearing it? Do yourself a favour, just watch the original Jurassic Park - it's a masterpiece.

I'll give the film one brownie point though, it has one of the best "jump out of your seat" scenes ever, well it made me jump anyway!