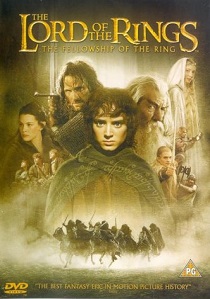 In a time we cannot remember, the plains of middle earth were ruled by Sauron, a dark and evil lord. He created one ring, a ring of absolute evil, which would enslave the keepers of the eleven other rings. They each accepted the rings power unaware that it would enslave them to Sauron forever more.

Many bloody battles followed as the people of middle earth fought Sauron and his armies. Finally, and after many years of bloody battles Sauron was slain and the ring taken from the dark lords severed hand. It was to be destroyed in the same pit of fire from which is was created so that evil could never return. However, the ring corrupts who ever possesses it and it survived, only for it to be rediscovered centuries later by an adventurous little hobbit called Bilbo Baggins.

With the rings rediscovery it places its owner, and the people of middle earth, in great danger once again. With the ring still in existence Sauron was not truly defeated and his powers are beginning to regenerate as he once again tries to envelop the world in darkness. With Sauron sending out his armies to track down the ring it is up to a plucky young hobbit called Frodo Baggins to make the hazardous journey to Mordor and Mount Doom to destroy the ring once and for all.

Together with his three friends, Sam, Pippin and Merry, Frodo leaves the comfort of his small village and heads for the elfin village of Rivendell. It is there he is joined by Dandalf, Aragorn, Boromir, Gimli the Dwarf and Legolas the Elf and together they form the fellowship of the ring and vow its destruction.

The picture quality is pretty much perfect and must surely go down as being one of the best presently available on DVD. With the film nearly three hours in length there could have been a lot of corners cut in order to accommodate the film onto one disc. However, from the moment the film starts the bit-rate is constantly changing and thus indicating that the encoding process was carefully prepared and carried out.

From this starting point you'd be wrong not to expect something from the picture reproduction. The picture is bright and beautifully detailed with some rich and detailed colours and textures throughout the film. From the brightly lit Hobbit village, the colourful Elfen settlement and the dark and gloomy dwarf mines the picture remains perfectly balanced. There's not a hit of colour bleeding, artifacting or outlining. Whilst the overall picture reproduction is excellent, a three hour film compressed onto a single disc does have an impact on the overall quality. However, unless you also own the extended edition of the film you'd be none the wiser. A direct comparison between the two certainly proves, unsurprisingly, that the less compression used the better the picture reproduction.

The sound is as equally impressive as the picture. Whilst I was disappointed not to see a DTS soundtrack it was not that unexpected on this disc set, but a DTS-ES soundtrack is also included on the extended edition. Never the less, the Dolby Digital EX soundtrack provided on this version is impressive enough and has some great use of the surround effects channels along with brilliant stereo steerage at the front. The surround channels are hardly ever idle during the whole three hours of the film and there's some excellent ambient effects which will have you turning your head to see just what's behind you. The dialogue is clearly audible in the centre and front channels throughout the film and there's never a moment when the volume needs adjusting.

There's also frequent and excellent use of the LFE channel. So many films just add low frequency effects because they can and they end up being be overused. Here they are carefully and thoughtfully used, and in moderation too, so that their low frequency rumblings won't upset the neighbours too much. It really does all add up to being a superb demonstration disc and a true credit to the director Peter Jacks and the rest of the team involved with The Lord of the Rings. A pat on the back is well and truly deserved for all.

The menus are pleasantly animated and scored at every level. Whenever a menu option on the main film disc is selected an important scene from the film will be blended with the background before the next menu options are presented. It really does add to the overall ambience of the film With the film running to nearly three hours there isn't any room on the disc for the extras so they are presented on their own disc. If you thought that the film was long enough then there's over two hours of extras to plough through on the second disc. It is certainly a disc set that will keep you occupied for a day or two!

The extras include three behind the scenes featurettes, with the HBO version probably being the most interesting version to watch. All three featurettes basically cover the same material, even to the degree of using the same interview footage. The "Mifflin In-Store" special is just a blatant promotion for a range of books and merchandise, although the background on the original publication of the books is interesting enough.

The highlight of the extras must be the behind the scenes sneak preview of "The Two Towers". The special effects and fight scenes look even more awesome than those seen in the first film and from this sneak preview alone I'm sure the crowds will be flocking back to the cinemas. After the events of September 11th let's just hope that people don't decide that the title of the second film is inappropriate. The only really glaring omission from the extras is a director's commentary. Fortunately, or not depending on how you look at it, a number of interesting commentaries from the cast and crew are available on the extended edition of the film.

The three films were shot back-to-back over two years in New Zealand, and what a location they picked. Since J.R.R Holkien based the original book on an ancient Europe, the director was forced to look for a location that resembled Europe but without the modern landscape. What he ended finding was an entire country.

The natural and rugged beauty of New Zealand is absolutely stunning and it looks just as impressive on the small screen as the big. I'm sure that the New Zealand tourist board is going to be rubbing its hands in glee as their visitor numbers shoot through the roof. Let's just hope the troops of tourists don't wreck those wonderful landscapes.

With a book of such epic proportions they said a live action film could never be made without cutting out huge swathes of the story. So what better way than to make three films to be released over a period of three years and lasting nearly nine hours. With production of the trilogy completed they are still finding the time and energy to return to New Zealand to modify or add additional scenes to the film. Talk about commitment to the job.

With the hype and excitement over the film driving itself, the Fellowship of the rings managed to rack up takings of over $850 million dollars. With production costs of pushing a world record $300 million dollars for all three movies, and even adding the promotional costs, it more than pays for itself. In theory, the remaining two films could be a total flop and it will still turn a profit. However, by taking the worldwide sales of the DVD into account, the likelihood of that is pretty remote.

Let's just hope that New Line Entertainment don't flog this film to death with hundreds of different cuts of the film. Trouble is, with the mouth watering extended edition being released some three months after the initial DVD release, and by a strange coincidence, just in time for Christmas, you just have to wonder what they'll do with the other films.

With a recommended retail price of £25 you also have to wonder about their the pricing policy. However, I'm yet to see a disc being sold at its full price either in the shops or on the internet. Even HMV, who tend to have the highest DVD prices on the high street, are knocking them out at a not too unreasonable £19.99.

Whilst fantasy films like this may not be everyone's cup of tea, it is still a film that will be entertaining people for many years to come. Lord of the rings is the ultimate adventure story which is truly the epic which surpasses all others. It must already be one of the greatest films of the 21st century, and one which is made even better by the extended edition.