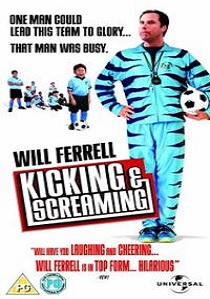 Every weekend, Phil's dad Buck coaches a little league soccer side that Phil's son plays in. The problem is, Buck is a very competitive man and he decides to trade his grandson to a rival team when he doesn't make the grade. Naturally, Phil isn't too pleased, and in order to teach his loudmouth dad a lesson he decides to take up the coaching role of rival team, the Tigers. And with that, there's only one thing on his mind, and that's revenge! However, the Tiger's aren't quite what you'd call Chelsea material and Phil has his work cut out getting the team to turn up, never mind managing to pass the ball to each other.

But fuelled by a rather bizarre, and disturbing caffeine habit, Phil soon discovers his competitive streak that runs so deep in his fathers veins. So, in the pursuit of excellence, he recruits two fabulously gifted Italian boys to the team. Who say's foreign imports can help out a football team? With some new star talent on the team, the Tiger's fortunes change quicker than a vast injection of cash from a Russian billionaire, and by the end of the season they're up against Buck and his boys for the championship in a match that even Alan Hansen would get excited about. But will Phil's team do the impossible and succeed in grabbing all the glory? Sounds like we've got a bit of game on our hands.

The picture is bright and colourful with a high level of detail throughout. Given that the majority of the film takes place on a football pitch, the colours are rich and a vibrant with some strong colour and flesh tones. Grain is kept to a minimum whilst there's no signs of either artifacting or outlining. And given that it's a recent release, the print is also free from dust scratches or other forms of print damage. All in all, it's a good transfer and something that the DVD reproduces with ease.

Given that the film is relatively short, it's rather surprising to find a rather stingy and compressed 384 Kbps Dolby Digital 5.1 soundtrack. However, given the genre of the film, there was never going to be any need for ground shaking or ear bashing effects. Also, with the large number of subtitle tracks valuable disc capacity hasn't been consumed by the audio score to the detriment of the picture transfer. Never the less, the audio still manages to impress, with some clear and precise dialogue in the centre channel throughout and with some effective use of the surround channels. However, with little or no on screen action, there the LFE channel remains stubbornly silent throughout.

The main menu is scored with the rather annoying theme music and animated with clips from the film. The submenus are static, but scored, and are accompanied by some nice transition effects. However, as is usual for a Universal DVD release, the menus will eventually time out and the film will start to play. Extras wise, with plenty of child friendly featurettes, there's a good collection of extras which add some much needed value to the package, and if you're quick enough down to the shops you may even find a case with a limited edition digital watch too. Also, in a welcome addition, each featurette is accompanied by multiple sets of subtitle tracks. However, rather surprisingly, with this huge melee of features, there's no room for the ubiquitous theatrical trailer.

First up is twelve minutes worth of grainy and low quality Deleted Scenes. Without an audio commentary or introduction you're left to your own devices to decide why they've been removed from the film. However, with none of these scenes being particularly interesting, they've most likely been removed for pacing purposes. Next are eight minutes of Outtakes which essentially consist of aircraft and animal noises in the background as well as the various cast members falling about laughing and forgetting their lines. As a collection of outtakes, it's not the funniest set you're going to see, and even the usually funny Ferrell appears to have toned down his mischievous side for this film.

Next up are five minutes worth of Alternate Takes which simply consist of a collection of scenes that have most likely been extended thanks to Will Ferrell's extensive adlibbing and fooling around. They are not that funny, and I guess you have to be a fan of his sense of humour to appreciate this collection of clips. The nine minute featurette From Rome To Hollywood looks at Francesco Liotti and Alessandro Ruggiero, the two Italian whiz kid football stars of the film. The two lads are shown performing all the tricks of the trade and, thanks to an English football coach, their skills were perfected for the film. Both lads don't speak much English so their interesting comments are relayed through an interpreter. It's all very kid friendly, but there's some interesting behind-the-scenes footage mixed in there too.

The three minute Kickin It With The Kids featurette looks at the other child actors in the film. There's the usual collection of back slapping from the adult actors and, being child actors, they are all frightening down to earth and serious with plenty to say for themselves. It's easier to teach an actor to kick a ball rather than the other way around (have you seen some of the footballers interviewed on Match of the Day?) so the eight minute Soccer Camp featurette follows football choreographer Dan Metcalfe and the young actors as they undergo two weeks worth of football coaching. There's even some coaching for Robert Duvall with some help on the technical lingo used in a football game.

The thirteen minute Behind The Net : The Making Of featurette is the main promotional fluff feature. There's plenty of clips from the film along with interviews with all the main cast members, both young and old, although there's still the usual back slapping moments from the writers and director. Whilst some of the information has already been mentioned in the other features, it's still an interesting look at how the storyline originated and was developed for the screen. Also, I guess fans of American football, along with the vast majority of the population of America, will know all about Mike Ditka. However, for the rest of us, we'll just have to accept that he's a great sportsman and a great bonus for the film.

The American fixation with soccer continues, and with all other American sports covered from just about every conceivable angle, it was only a matter of time until the comedy sights were turned towards soccer. Whilst this enthusiasm is welcome, the main stumbling block the American's must overcome is the fact that this sport is known as Football not Soccer, oh, that and the simple fact that Will Ferrell really does needs to extract himself very quickly from child friendly films before its too late. His madcap humour really doesn't really mix too well with this sort of film and he's much better left alone performing his wacky comedy on films with a more mature audience in mind.

Still, that doesn't mean that Will Ferrell stinks in this film. Far from it, as without his comedy antics this film would be as dull as an Arsenal nil nil draw on a wet and windy Saturday afternoon. The extras do manage to bolster a flagging package, and fans of the Ferrell stable are bound to be happy with the results, but for everyone else, it's a rather tired and overused formula that makes it a little hard going and too cheesy.