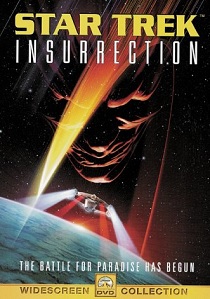 When Data goes berserk on a mission the Enterprise diverts from boring diplomatic functions to prevent him from being destroyed. However, Starfleet are not giving the complete story to Picard and when the Enterprise arrives they discover a paradise planet populated by the Ba'ku who are to be relocated to another planet to satisfy the demands of another civilization.

With Starfleet clearly in defiance of the prime directive, Picard and the crew are forced to take sides with the Ba'ku who have chosen to forsake their technology advances to live in harmony with the planet, to protect their home, culture and unique planets properties before being lost forever.

The picture is excellent. Bright and sharp with no visible signs of any artefacts, although I felt that the region two editions contrast was a little too high. The CGI special effects are especially impressive with the gas cloud and planet colours being especially vibrant. However, the picture is so clear that some of the CGI's, especially a boys pet, on the planets surface are all too evident.

The sound is superb, especially with the space scenes as the crafts whiz around the surround channels and the region two edition has the benefit of additional German and Hungarian soundtracks. The music score and atmospheric sounds also covers the surround channels well, just as a good film should.

However, the region one version is yet another film which defaults to standard surround and you have to select the 5.1 before starting the film. This is a very annoying habit which some companies continue to do. The region two edition, thankfully, defaults to English 5.1, but with the addition of the German and Hungarian 5.1 soundtracks the Dolby 2.0 audio soundtrack has been lost. The static menus on both editions are rather disappointing with no sound or animation.

Certain people always say that the odd numbered Star Trek outings are the weakest and if you look back at the previous films it appears to be true. However, Insurrection breaks this mould with a particularly good script, even if there isn't too much action to be had. It seems that most of the latest films have been based on events taking place here on earth, so unless the American government are not telling us something about First Contact, this story has all the hallmarks of the Balkan problem of ethnic cleansing.

There's so many subtle moments in this film that probably make it the best Star Trek film so far. There are plenty comical elements in the film to keep the Star Trek fans happy, especially as the planets properties start to have an effect on the ships crew. Hopefully, now that Paramount have committed themselves to R2 we can see the complete set of films out soon.

If the region two edition is on par with the region one edition then I will always recommend the region two version. Again, this is the case with Insurrection. Finally Paramount have committed themselves to the region two market which must both be welcomed, and criticised for being such a late entrant to the market.