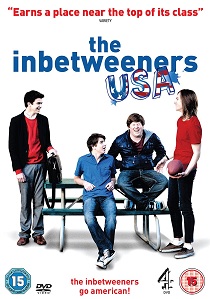 ReviewTV SeriesComedy
Review Article Go back to homepage
Simon, Jay, Will & Neil are back. The futile crushes and buckets are vomit are still there but something's different - The Inbetweeners have had a make over and they've all come out looking American!
Bubba Lewis, Zack Pearlman, Joey Pollari, Mark L. Young, Alex Frnka, Brett Gelman
Comedy, Television
2
2 Hours 49 Minutes
Thank you for supporting DVD365.net when you order using the link(s) below.
Buy DVD
Story

Will's parents have just divorced and, as a result, he's ended up leaving his fee paying school and moving to a new area with his mother and enrolling at the local high-school - and all with it's own unqiue features, such as doorless toilet cubicles, dodgy canteen food, budget cuts and the usual collection of bullies.

As Will use to attend a private school some of his more snobbish tendencies have remained and it doesn't take long before he's hated by just about everybody in the school - even more so when each new arrival has to wear a giant green badge with their name on. The perfect target for bullies.

Never the less, with no friends Will still regards it as the perfect opportunity to start afresh and reinvent himself - even though he's going to have to work very hard to become popular and make new friends. Enter the rather reluctant Simon, Neil and Jay - his new group of friends who are regarded as not cool enough to be popular but not geeky enough to be nerd. They exist somewhere in the middle.

They all soon become good friends, all with different quirks, stubbling their way through the awkward and often humiliating journey of being a teenager by taking one step forward and three steps back. Together they find strength in their shortcomings - mostly by mocking each other. But, then again, that's what friends are there for.

The picture is bright and colourful that only an annoyingly hot and sunny American location could produce. Sure, there are the usual colour issues with an NTSC conversion, but they're rich enough and there's plenty of detail in the various day and night time scenes, skin tones are warm and there's no issues with artifacting or outlining. It's never going to be anything spectacular, but then again, it's simply an American television series - albeit one with a budget that surpassed the budget of The Inbetweeners film!

The Dolby Digital 2.0 192Kbps soundtrack is more than sufficient for its needs, with the monologues and dialogue easily audible. However, the musical score was a little overbearing at times with plenty of music I've never heard of - or particularly liked - and unless you're into your American music I doubt you will either. But then again, given that the series was produced by MTV it's hardly surprising that music figures in a teenage based and aimed series.

The menus across both discs are nicely animated and scored in a manner not too dissimilar to the original UK versions. There's the usual option of playing the entire set of episodes on the disc as well as selecting a particular episode to view. Each episode is also accompanied by the usual scene selection options. It's all standard stuff really.

Although the original press release stated that there is Behind the scenes footage and Deleted scenes, they are not to be found on the two discs sent for review. I even checked the BBFC website to see whether any details were listed there, but alas, it looks like they're either none existent or they're reserved for the American market.

I'm always a fan of extras - they can help add much needed value to a disc, especially if you've already seen the content and need a little something extra to tempt you into a purchase. Still, as I haven't seen The Inbetweeners USA before, nor seen it advertised to be shown on E4 or Channel 4, I guess we're getting a full on series as the extras instead!

Our friends across the pond don't exactly have a great track record when it comes to remaking popular British shows - especially, for some odd reason, those classic home grown shows which make Channel 4 truly stand out in the crowd. With the remake of Skins axed after one season plus The IT Crowd and Peep Show not even making it past their pilot episodes, expectations aren't going to be too high. Only a degree of curiosity will potentially drag fans of the original show, including myself, into the fold...

However, it's not all doom and gloom as Shameless has transferred well whilst the BBC's Office is about to begin its ninth season (and no doubt making Ricky Gervais even more money in the process). Perhaps, rather than sticking to the same formula which made them so popular in the UK, these remakes were made all the better by the presence of well know actors such as William H. Macy and the ever bankable Steve Carrell. A smattering of originally doesn't go amiss either.

So when I heard about an American remake of one of my all time favourite shows I could have been easily mistaken for a lifelike version of Edvard Munch's famous painting "The Scream". Surely the American's couldn't do justice to such a classic series with a brand of comedy which simply doesn't travel across the Atlantic - irony and sarcasm. And given that some of the early episodes copy the dialog - and scenes - on a virtual word for word basis, I was starting to shift rather uneasily in my seat at its failure to even raise the slightest chuckle. In fact, I felt a little embarrassed.

Whilst the characters of Will and Simon don't feel right at all (and are rather annoying), I did warm to the new versions of Neil and Jay. In fact, the air headed nature of Neil was rather refreshing and was the eventual provider of most the laughs. However, the biggest character disappointment of them all is Mr. Gilbert as he is transformed from a laughter inducing psychopath that only Gregg Davis could portray to a rather unfunny bully.

Never the less, the episodes did start to grow on me - even if I still hated the music (set for American tastes naturally) and it kept on reminding me of a poor-man's remake of American Pie. I think the improvement came about once it started to move away from simply being a direct copy of the UK series and find its own feet - even with the obvious toning down of the swearing for those delicate American ears. As soon as it slipped into that American way of operating, I began to sit up and take notice. I even laughed.

Unfortunately, after doing some research I discovered that, after disappointing viewing figures, the series will not be renewed for a second season. It's a shame really as soon as the show tried to move away from it's British roots, it did start to show a small glimmer of promise. I guess the only trouble for British viewers is that it is always going to be judged by its big brother and, even whilst I tried to write an unbiased review, it was very difficult not to keep thinking back to my favourite show. Still, on the plus side, it's really made me want to break out my Inbetweeners DVDs again.