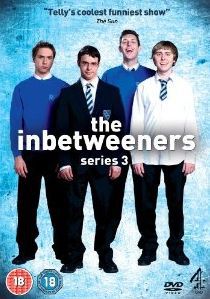 With Will leaving his fee paying school, moving to a new area with his mother and enrolling in the sixth form at the local school, his time at Rudge Park comprehensive has been a hard one. With the head of Sixth Form, Mr. Gilbert, gaining great pleasure in making Will's life total hell, it's lucky for him that he has Simon Cooper, Neil Sullivan and Jay Cartwright as friends. Trouble is, they can hardly be classed as being on the same intellectual level as himself - and some would say that Neil is on a totally different planet! Oh, and after last year's disasters, Will is trying to escape being known as the kid who shat himself in an exam.

Simon Cooper was Will's first, albeit initially reluctant, mate. Although you'd class him as the "normal" member of the group, Simon is one of the most anxious people you're likely to meet with the tiniest of things likely to get him into a panic. He's also the romantic of the group and is still secretly in love with childhood friend Carli D'Amato (although, after so many failures, it's pretty much an open secret now). However, he may have finally found someone else to lust after - a real girlfriend - which is something the others find a little hard to take but very easy to ridicule. He's going to need some advice for the bedroom, so here's hoping he ignores anything that Jay has to say...

Everyone has to have a friend like Jay Cartwright. He's the sort of friend that in later life you'll look back and wonder why you were friends with him in the first place. Your typical hormone filled teenager, and now with a provisional license to drive his mum's red Nissan Micra (hopefully titled 'The Mingemobile'), Jay is a potty-mouthed verbal bully who's continual lying about his sexual conquests and daring feats that would embarrass every gigolo and daredevil going. Even though there's a complete lack of evidence to back up his claims, Simon and Will rarely pick him up on his fantasies - leaving Neil to hang off every word.

Neil Sullivan is a boy whom the phase "in a world of his own" was created. Neil is also twenty seconds behind everything and everyone, but occasionally he does manage to say something almost profound. He too has passed his driving test and owns a car. Unfortunately, it's a car without an engine. Neil is also quite a good dancer and is more successful with the girls than he lets on - or more likely - than he actually know he is. The other boys in the group also think that Neil's divorced father is a closet gay.

Picture quality wise, as a television series broadcast in the United Kingdom, The Inbetweeners was never really going to set the world on fire. Lacking the budget of pretty much any American production, or even a British soap-opera such as Eastenders or Coronation Street, the quality of the transfer serves its purpose well. With some reasonable colours and flesh tones, solid black levels and a good level of detail, it's all easy on the eye. Also, with the internet playing a bigger part in "on demand" and "catch up" television, it's also good enough to go on-line without suffering from over compression.

Sound wise, as with previous DVD outings from the Channel Four comedy stable, due to the bandwidth limitations of a terrestrial television broadcast, The Inbetweeners audio track isn't going to excite. Still, the Dolby Digital 2.0 soundtrack is more than sufficient for its needs and the all important dialogue department is kept crisp and clear at all times whilst the up tempo "indie" musical score helps compliment things. It's not going to win awards for its sound quality, but it's the sort of soundtrack to be expected from a budget television series such as this.

The menu system is pleasantly animated with the opening titles from the show and scored with the well know theme tune. Fans of the series are going to be more than happy with the number of extras on offer here. It's fairly unusual for a television series to come equipped with such a range of extras (especially for a UK release too) so the Outtakes, Deleted Scenes and a collection of Video Diaries ensures there's still plenty more entertainment to be enjoyed.

First up is the Behind-the-Scenes footage. Made up of three sections, and running around twenty minutes, there's the initial The Boys' Thoughts from a Spa. And it's exactly as it sounds - with the boys talking about the third series from the comfort of a spa. I guess it's simply all too much like hard work! Next up is the rather short The Squirrel footage where we see what went on when Jay tries to run over a squirrel. Finally, there's the In The Car footage where the boys talk about the monotony of filming in a car (including various members of the public - usually in white vans - honking their horns as they go past).

The thirty minutes worth of Video Diaries sees Simon Bird, Joe Thomas, James Buckley, Blake Harrison and Greg Davies being handed a camcorder to record the daily goings on during filming. Whilst some are longer, and more interesting than others, it's what you've come to expect from these sorts of features - lots of messing about, eating food and, if you're lucky, the occasional bit of on-set footage. It's not my favourite section, but it's worth investigating - if only to see what is going on behind-the-scenes.

The Deleted Scenes and Outtakes are certainly worthy of a look in. Whilst the Deleted Scenes don't really offer anything extra to the various episodes they were cut from, it's still great to have them included here. Likewise for the Outtakes. I'm not really a fan of outtakes, especially if they end up being hours of people falling about laughing, but the collection on offer here is different than most and they do manage to raise a laugh as they fluff their lines, mess about on set or have a spot of bother with the props. Also tucked away in this section is the Series 3 Prequel which was used to advertise the show on Channel 4 and E4

Things are rounded off nicely with a set of Audio Commentaries - including two "yack tracks" on the series opener. Not all of the lads are available on every episode, but they do manage to turn up for at least one of them. Greg Davis and writers Iain Morris and Damon Beesley are also on hand as back-up too. The general banter from the commentaries is good with plenty of anecdotes and snippets of behind the scenes information, but I tended to find it a little muddled at times as everyone tried to speak at once and, if you're trying to watch the programme at the same time, it can become a little hard going.

The Inbetweeners has already landed an impressive array of awards including; a BAFTA (which cheekily appears in one of the extras!), British Comedy Awards, an RTS award for writing, a Broadcast Award, a TV Quick and TV Choice Award, an NME Award and a nomination for The National Television Awards. In addition, the DVD release of Series Two achieved triple the sales of Series One in the week of release and the show currently has over 1.1 million friends on Facebook.

It's a comedy series that works too - especially for people in their 30s - as it helps to remind you of any embarrassing moments during your school days which you thought you'd forgotten about. But let's not forget that it's also introduced the world to classic words such as "Briefcase Wanker", "Bus Wankers", "Bum-der" and "Clunge". Here's hoping that the Oxford English Language Dictionary will be issuing a revised edition soon...

Whilst series three is a welcome addition to the previous series, the series still lacks something. I thought it was just me, but other people have also commented that, when compared to the previous seasons, there is something missing. Whilst some of Will's, Simon's, Neil's and Jay's previous mishaps have had me in fits of laughter, series three only really managed to raise a chuckle with the occasional belly laugh. I hate to say it, but I think I agree with the writers that the series has finally run its course and they won't be doing another. I guess the only way to have another "fix" of The Inbetweeners is to hope that the American remake translates well.

Never the less, The Inbetweeners remains a comedy must and can be classed as one of the best comedy shows on British television today. Yet again, Channel 4 have come up trumps with a cracking cast and equally good writers (even if it has gone slightly off the boil) but if you consider that one of the writers, Iain Morris, is a former Channel 4 comedy commissioning editor who script edited Peep Show, you can be sure you're in for a laugh. So, if you're a fan of Peep Show and/or Teachers then this DVD is for you. Highly recommended.