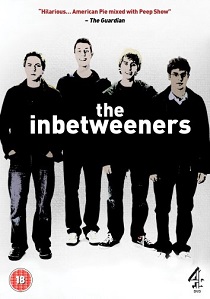 Will's parents have just divorced and, as a result, he's ended up leaving his fee paying school, moving to a new area with his mother and enrolling in the sixth form at the local comprehensive school. As Will use to attend a private school, some of his more snobbish tendencies have remained and it doesn't take long before he's hated by just about everybody in the school - even more so when each new arrival has to wear a giant green badge with their name on. With no friends, Will is going to have to work very hard to make new ones - and you can tell things are going badly wrong when he falls foul of the school bully on the first day of school. Still, where's there's a Will, there's new friends to be made with Simon, Neil and Jay taking up the challenge.

Simon Cooper is Will's first, albeit initially reluctant, mate. They share the same class and Simon has reluctantly agreed to show "the new kid" around the school. Despite early reservations, Simon soon warms to Will - mainly because he's the only kid in the school who doesn't call him 'boner' (after an embarrassing - and unwanted - teenage moment in the sixth form common room). The romantic of the group, Simon is secretly in love with childhood friend Carli D'Amato, but after he drunkenly spray pained his feelings all over her driveway it didn't stay a secret for much longer.

Neil Sullivan is a boy whom the phase "in a world of his own" was created. Neil is also twenty seconds behind everything and everyone, but occasionally he does manage to say something almost profound. He's also quite a good dancer. Much to Neil's horror, his unconventional tank-top wearing dad - a single, middle aged man who struggles to raise a family after his wife left, is the butt of many jokes - including his sexuality.

Everyone has to have a friend like Jay Cartwright. He's the sort of friend that in later life you'll look back and wonder why you were friends with him in the first place. Your typical hormone filled teenager, Jay is a potty-mouthed verbal bully who is constantly lying about his sexual conquests and daring feats. Even though there's a complete lack of evidence to back up his claims, Simon and Will rarely pick him up on his fantasies - preferring to do some imagining of their own in the vain hope they'll get some action too.

No doubt filmed on an extremely tight budget, plus the preview discs provided for the review were not supplied as per the final release, the picture quality isn't really that good. Never the less, this is no big budget Hollywood blockbuster and the relatively soft and occasionally blocky picture is still easy to watch with only sporadic problems with grain. Still, as you'd expect, there's no print damage and it's nothing really worth getting too upset about - after all it's the comedy content we're more interested in here.

As with the previous DVD outings from the Channel 4 comedy stable, due to the bandwidth limitations of a terrestrial television broadcast, there is very little to expected from the sound department. Still, the 384Kbps Dolby Digital 2.0 soundtrack is more than sufficient for its needs and the all important dialogue department is kept crisp and clear at all times whilst the up tempo, and teenage friendly, musical score compliments things well. It's not going to win awards for its sound quality, it's a soundtrack which is be expected from a budget television series such as this.

Unfortunately, the preview disc wasn't the full retail version so there were no extras or menus to explore and pass judgement on. Never the less, judging by previous DVD releases from Channel 4, the Audio commentaries by the writers, cast and producer, Video diaries from all four cast members, The making of documentary, Meet the cast and Deleted scenes features do sound worthy additions to what is already a rather good release.

Originally commissioned for E4, this series is so good that it really needs to be moved to the more accessible Channel 4. In fact, I'd go as far as saying that it would have received a far, far bigger audience and press coverage if it had moved channels as, until I received the review disc, I hadn't even heard of the series. And, considering I love this sort of comedy, it's quite a big mistake from the likes of Channel 4 who are dominating this sort of home grown comedy. It's also a shame that the series is only made up of six episodes.

There's no doubting that this series is targeted at the teenage audience so, parents or people with a fragile disposition, beware - there's plenty of swearing and references to sex. Although my teenage years are well behind me now, The Inbetweeners is a series that pretty much every teenager and young adult can relate too - and that's why it is so good! Let's just hope a second series is commissioned but, this time, make sure it's broadcast on Channel 4.

Considering one of the writers, Iain Morris, is a former Channel 4 comedy commissioning editor who script edited Peep Show, the similarities to the award winning series are hard to avoid. Still, who's complaining? If the formula works then why not put it to work else where? So, if you like Peep Show and/or Teachers then this DVD is for you. Highly recommended.