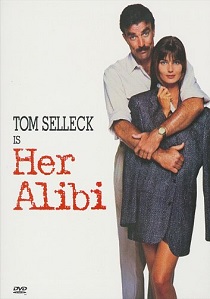 ReviewComedyRomance
Review Article Go back to homepage
Mystery novelist Philip Blackwood is suffering from a case of writers cramp. Whist checking the local courtroom for inspiration he witnesses the trail of a beautiful Romanian woman who has been accused of murder. He instantly falls in love with her and provides her with an alibi, trouble is... what if she is really a murderer?
Tom Selleck, Paulina Porizkova, William Daniels, James Farentino, Hurd Hatfield, Ronald Guttman, Victor Argo, Joan Copeland
Comedy, Romance
1
1 Hour 34 Minutes
Thank you for supporting DVD365.net when you order using the link(s) below.
Buy DVD
Story

It is four years since Philip Blackwood's film critic wife left him and his last successful mystery novel "Death of a critic" was published. Now he's struggling with an extended case of writers cramp and the publishers are getting impatient. Desperate for inspiration he heads for the local courtroom where he meets his like-minded novelists searching for an idea.

There he sees the trial of a young Romanian woman accused of murder, and sensing that she is innocent offers her an alibi. He claims that she was having an affair with him and that she was at home with him at the time of the murder. The police have no reason to doubt him and release her, trouble is he knows nothing of her past.

Did she really attempt to poison him and his guests at diner? Was the incident with the bow and arrow an accident? Why is she such a dab hand with a carving knife? All these things keep Philip on his toes as his new novel flows with his best work ever.

The picture is only average and suffers from a fair amount of graininess throughout the film. However, the picture is still bright and a vast improvement on the VHS version. The soundtrack is only presented in stereo but it is more than sufficient for this film.

This is an early DVD title from Warner and unlike another early title Beetlejuice there are no extras whatsoever (a bit like an early region two disc really!) but don't let that spoil this hilarious romantic comedy.

This film is really, really funny with the poisoning incident and a slight problem with a bow and arrow causing me to nearly split my sides with laughter. The film is very pleasing and has a level of intrigue to keep you guessing for quite a while. Philips paranoia and self preservation instincts provide plenty of laughs and there are some wonderful quick one liners from his family members.