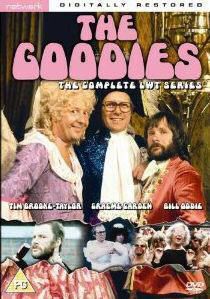 ReviewTV SeriesComedyFamily
Review Article Go back to homepage
The famous comedy trio of Bill Oddie, Graeme Garden and Tim Brooke-Taylor are back, but this time they've defected - from the BBC to ITV. With a bigger budget and an eager audience to please, there's even more madcap adventures than before.
Tim Brooke-Taylor, Graeme Garden, Bill Oddie
Comedy, Television, Family
2
2 Hours 55 Minutes
Thank you for supporting DVD365.net when you order using the link(s) below.
Buy DVD
Story

One of the most loved comedy shows of the seventies and early eighties, The Goodies made household names of its cast, Bill Oddie, Graeme Garden and Tim Brooke-Taylor, in a show highly rated for its visual humour and surreal take on life. Some may compare it to the likes of Monty Python, but it was far, far funnier than what the Python crew could muster. The series originally started life on the BBC and, in something that would never take place these days, The Goodies never actually had a formal contract with the BBC. So when the BBC's Light Entertainment budget was exhausted by their lavish television production of The Hitchhiker's Guide to the Galaxy, the trio signed a contract with London Weekend Television for a series on the BBC's arch rival - ITV.

However, after just one hilarious half-hour Christmas special episode and a six-part series, the series was prematurely, and rather dramatically, cancelled. With their lavish sets and outrageous costumes it soon became apparent to the bosses at ITV that it was even beginning to stretch the budgets of none license fee - and near bottomless pit of money - funded ITV. So, with hardly a repeat appearing on our screens these days, it's a great joy to be able to watch them all over again on our favourite shiny format.

There should be a law that stipulates that if you are to raid the archives and release a complete gem of a television classic on DVD, you must make an effort in preserving the material for future generations. Unfortunately, whilst the people at Network must be congratulated for their efforts in licensing and sourcing material for this release, they should be slapped around the head in equal measures for providing such a dire transfer. I've no idea where they sourced the original video from, but by all accounts somebody must have found it in a damp box that was being used for propping open a door. As a consequence, the passage of time has not been kind to the image. There's dust specks and picture imperfections galore, hideously washed out colours and contrast levels that are far too high.

Sound wise, there's not much that can be said for the Dolby Digital 2.0 192Kbps soundtrack. It's functional, but nothing else. Never the less, and unlike the picture, the audio is clear enough without cranking up the volume too high to annoy the neighbours. In fact, if you usually watch your material via a television with built in speakers then you couldn't do any worse than dispensing with your fancy surround system to watch this series.

The seven episodes are housed on the first disc whilst the extras can be found on the supplementary disc. The menus across both discs are scored with that famous theme music whilst various clips from the show play in small bubbles that float across the screen. As well as being able to select an individual episode, the main feature disc also includes the welcome addition of a "Play All" option.

I really feel for the poor researcher who was tasked with collecting clips for this release. Whilst they are to be congratulated for what they've managed to drag up from the depths of some dank and dark archive at ITV, I can't really say that I'm that impressed with the results. First off, there is a twenty-five minute episode of the unfunny Doctor in the House and quite what this has to do with the actual The Goodies is beyond me. Still I guess a series that has Tim Brooke-Taylor, Graeme Garden and Bill Oddie in is pretty much fair game. The same can be said of Bill Oddie's awful appearance in the children's television series From the Top. The acting is pretty dire all round, including a rather cringingly unfunny Bill, but the most worrying thing about this 1985 series is that I actually remember watching it on television!

Next up are four music videos taken from the music television programmes Shangalang, hosted by the Bay City Rollers no less, and Look Alive. The crew and their dodgy outfits are on hand to sing their hits Funky Gibbon, Black Pudding Bertha, Nappy Love and Make a Daft Noise for Christmas. If you didn't know just how silly this lot were, then after watching these clips you'll be in no doubt that both the record buying public and The Goodies were completely bonkers. Next up, and truly scraping the bottom of the barrel of DVD extras, is Tim Brooke-Taylor Judges a Turkey. Now, you may well think that this is some sort of comedy sketch, but you'd be totally wrong as it really is a clip of Tim Brooke-Taylor judging a 1981 Christmas turkey competition. With audio sounding like it was being played back from the bottom of a bucket, it has to be one of the weirdest extras I've ever seen!

The remaining extras are made up with a number of Archive Interviews. I think Network must have some sort of licensing agreement with Gloria Hunniford as, with their comedy release of Girls On Top, she's yet again on hand to interview the power house of the trio - Tim Brooke-Talyor. Running for a rather substantial twelve minutes for a television interview, the 1983 interview is quite detailed and Tim talks at great length about The Goodies and what they, or more specifically he, did after the series finished. Out of all of the extras on the disc then this is probably the highlight of the set.

Next up are two different sets of rather strange interviews from This Morning presented by Richard Madeley and Judy Finnigan. In one rather disjointed interview from 1993, Bill Oddie talks about the good old days as well as talking about other comedies and comedians (clips of which have been removed for "contractual reasons"). In the other clip from 1994, the entire trio are back in an eight minute interview and they review other comedy videos and, naturally, promote their own material too. Next up is an four minute interview with Tim and Graeme at the Cambridge Arts Theatre as they try to put across their more serious acting abilities - although they do acknowledge that people will be going to the theatre for other reasons. Things are all rounded off with an automatically scrolling Stills Gallery.

If it wasn't for the fact that, just like he Two Ronnies, Benny Hill and Monty Python, The Goodies are such a British comedy institution, I'd normally be ranting and raving about the appalling state of the image quality on this DVD release. Unfortunately, this is not an isolated incident as distributors Network have the unerring ability to churn out titles with a below par or substandard image quality on a fairly regular basis. However, whilst this release suffers from a picture quality that is head-in-your-hands awful, it's the simple fact that more classic comedy has found its way on the DVD that really calms me down.

I've never been one for the silly antics of Monty Python, but The Goodies are just as funny today as they were twenty-five years ago - and I've physical proof of it too. It's happened in the past, I've sat down to watch some classic comedy of old - something like a television series I use to watch when I was much younger - only to find it boring and completely unfunny. However, with The Goodies I was cracking up with laugher just as before. Fortunately, and unlike the unlucky Alex Mitchell - the 50-year-old bricklayer who in 1975 literally died laughing, I survived the ordeal intact. So, if my funny bone is not a good enough recommendation for you, nothing else will be.

With its truly wacky collection of extras, and equally wacky on screen antics, The Goodies : The Complete LWT Series is going to keep you happy for hours. If you're here to reminisce over a golden age of comedy or simply enjoy it for the first time, the frolics of Tim Brooke-Taylor, Graeme Garden and Bill Oddie will have you chuckling for hours. It's only the fact that the transfer lets its down such much that I'm refraining from giving it a Highly Recommended stamp.