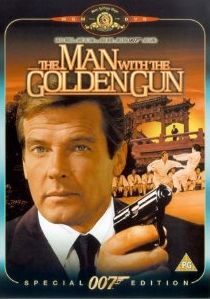 When a golden bullet arrives at the headquarters of British intelligence with "007" carved in it, Bond believes that he is the next target for the renowned international assassin Scaramanga. Bond is given the mission to locate and kill Scaramanga before he can murder Bond and collect his reputed $1,000,000 bounty.

However, as he tracks down the assassin, Bond discovers that Scaramanga has stolen the priceless Solex device. This device can convert massive amounts of solar energy into electricity at a minimum cost which Scaramanga plans to sell it to the highest bidder. Rather going after Bond himself, Scaramanga has managed to bring Bond to him for a duel between the best of the best in his bizarre island fun house.

The picture is bright and colourful enough with an average bit-rate through out the film. However, similar to most of the Bond discs to date, the picture still suffers from many dusk specks and other picture imperfections. Although the layer change point is obvious, it is done at a sensible point and not in the middle of any dialogue or action, although I guess newer DVD players will be able to change layers quicker than others and make it unnoticeable.

Yet again, the major disappointment with this film is the mediocre sound track. Although clearly labelled as having a 5.1 soundtrack on the rear of the box, it certainly doesn't contain one as the film is only presented in stereo, and a pretty dull track as that too. Still, at least it is better than the mono soundtracks on the previous discs, but an attempt to remaster and tidy up the soundtrack would have been a big attraction to Bond fans.

As usual, MGM have managed to dig up plenty of interesting extras, with the many Documentaries still being interesting along with the Trailers and Radio spots. There is also the wonderfully animated menu system which just seems to get better on each Bond release.

Although Christopher Lee is excellent as Scaramanga, I still feel that there was something lacking from the film and I didn't really enjoy it that much. The Man with the Golden Gun must be one of the weakest Bond films and although the comedy element has been toned down from the previous film Live and Let Die, why that annoying, and blatantly racist, sheriff J.W. Pepper makes a return is beyond me.