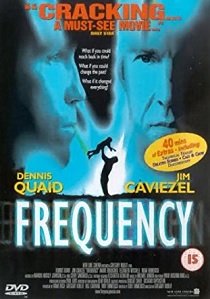 ReviewScience FictionThriller
Review Article Go back to homepage
When John Sullivan opens a link to the past he has the opportunity to save his father being killed in a fire.
Dennis Quaid, James Caviezel, Andre Braugher, Elizabeth Mitchell, Noah Emmerich, Shawn Doyle, Jordan Bridges, Melissa Errico, Jack McCormack
Suspense/Thriller, Science Fiction
2
1 Hour 52 Minutes
Thank you for supporting DVD365.net when you order using the link(s) below.
Buy DVD
Story

John Sullivan is an overworked NY cop who's lived in the same house all of his life. He was raised by his mother when his fireman father was killed in the line of duty in a warehouse fire in 1969. He has never really got over the loss of his father and his career has taken its toll on his private life. As he descends into depression his girlfriend packs her bags and leaves.

Searching though the house he comes across his fathers old ham radio and decides to set it up and see why what all the fuss was about. However, due to some strange atmospheric condition he manages to communicate with his father thirty years in the past. He soon realises that he can warn his father about the warehouse blaze and prevent his death.

Unfortunately, by saving his father he has changed the past and by doing so he discovers that his mother has become a victim of a uncaught serial killer. With the evidence in the present he enrols his father in past to become detective and figure out what was changed in the past to cause the death of his mother and stop the chain of events. However, the murderer has managed to cover his tracks well and John's investigations soon put him as well as his father at risk.

The picture is good with a high bit-rate throughout the film. With the majority of the film taking place at night and in dark locations the colours still managed to be rich and vibrant with some excellent colour tones without any artifacting or outlining.

However, it is the sound that excels, especially during the opening ten minutes of the film and the dramatic rescue at the burning warehouse. The surround channels are extensively used with plentiful ambient effects and there's plenty of LFE's to keep the sub-woofer occupied, especially during the initial section of the film, and the dialogue is impressively clear and precise in the centre channel.

The animated menus are good, if a little too loud, and the extras certainly add value to the package with deleted scenes and a director's commentary. There's even an interesting forty minute documentary exploring the theoretical science behind the film. This is a remarkable film which takes and interesting plot and turns it into a complete unexpected gripping murder thriller.

Yet again Entertainment in Video manage to produce another superb DVD package with plenty of extras and all round sound and picture delights. The only downside would be their packaging. I do wish they'd stop defacing the covers when listing the extras and the section on the rear of the box is insufficient for the number of extras, as which was certainly the case with their release of Seven.