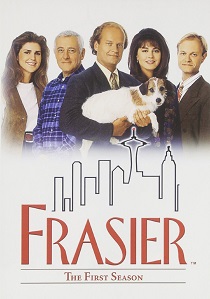 Frasier Crane, an extremely fussy psychiatrist and bar-fly at the Cheers bar, returns to his native home town of Seattle to take up a job dishing out psychiatric advice as the host of a radio talk show on KACL. After a messy divorce in Boston, Frasier has decided to started out in life again and, as care free as a possible, he's got himself a bachelor pad in a rather sumptuous apartment overlooking the city.

However, his newly found freedom is quickly brought crashing down to earth when his brother Niles informs him that their father, Martin an ex-policeman shot in the line of duty, can no longer look after himself and should move in with one of them. Naturally, Niles has no intention of taking in his father, especially since his extremely fussy wife Maris would have none of it, and after dismissing the idea of the dreaded retirement home Fraser reluctantly decides to take him in. Unfortunately, when Martin moves in Frasier gets more than just his father as he's also got to put up with his dog Eddie and his favourite recliner - a hideously green and battered chair which it totally out of place in his luxury pad.

But that's not all. When Frasier hires his father a physiotherapist in the first of many more mix ups, she too ends up staying at the now overcrowded apartment. Mind you, Daphne is no ordinary physiotherapist. Originally from Manchester in England, and with an accent to match, she also claims to be a bit of a psychic and has a number of strange ideas and customs which would even be out of place back home in Manchester. And if that wasn't bad enough, when Niles meets Daphne for the first time he quickly realises that he has a mad crush on her and starts finding any excuses to visit the apartment.

Together with his radio programme producer Roz, a man eater who has the knack of picking up the most inappropriate men and then wondering why she doesn't have a long term relationship, they all do their best to make Frasier's life as complicated and frustrating as possible. Welcome to the wonderful city of Seattle and the life of Frasier Crane.

As with most television series, especially early seasons where every penny of the budget counts, the picture quality leaves a lot to be desired. Although the picture is better than I expected, with little sign of artifacting or graininess, it is still the usual case of a picture that is high in contrast, low on colour and way too soft. It may be good enough for American television but it totally sucks on DVD. Mind you, its certainly better than anything that video could offer and you don't have the annoyance of the commercial break. It's a small sacrifice to make.

Again, like the picture, the 192Kbps Dolby Pro-logic soundtrack is nothing too special and it is possible to turn off the surround system and crank up the television volume instead. Mind you, saying that, the dialogue can be a little muffled at times and by using the surround system to process and separate out the front channels, can dramatically improve matters somewhat.

The season one box-set is presented in a colourful paper fold-out Digipack set. Whilst I normally hate these designs, sighting their lack of longevity, this set is well constructed with creases in all of the right places and thus ensures that any dents and crushed corners are kept to a minimum. As a result this paper presentation set is sure to last longer than most.

The menu system on all four discs is the same static and silent affair. The only thing you can do is select an episode or view a section on the celebrity phone in voices. Yet again, the DVD authors have decided to omit a "play all" option and, in a disappointment to anyone hard of hearing, there are no subtitles available. I suspect they were omitted because they'd be pushing the disc capacity and a fifth disc would have been required to accommodate the entire season. Let's just hope that the European release will contain subtitles.

Although the extras are spread over all four discs they aren't anything groundbreaking and I was left wondering what all the fuss was about when the release date was delayed for allow for some "fine tuning" of the extras. Although executive producers Peter Casey and David Lee provide a commentary track on the pilot episode, it would have been just brilliant if the entire cast could have also provided a commentary on one of two or the episodes. However, I guess that their sky high fees and even bigger egos soon put an end to that idea.

The fourth disc also includes an interesting, but rather short, behind the scenes featurette with interviews with the cast. I'm sure I've seen some of the interview material before so I'm not convinced that it was created exclusively for the DVD. It's also interesting to see just how much influence Kelsey Grammer had over the show and the picking of the various cast members. I'm quite sure he's one of those types who is quite capable of having a major strop and storming off to sulk in his luxury dressing room.

The production featurette on Frasier's apartment is also rather interesting but its presented in a hideous manner. From the extras menu you have a number of menus looking like Frasier's apartment. From these menus you then have to select items of furniture, like the couch or dining table, for a short feature on the design and use of each item. Whilst this may be a nice touch it is extremely frustrating having to select each item in turn. Again, why is there no play all function?

After the highly successful Cheers finally went off the air, NBC were desperate for something to replace it. And with Kelsey Grammer signed up for a series of his own, it was a simply a case of finding something to suit him. Keeping the same team of writers, and with little interference from NBC, they eventually came up with the show that we have today. It was a big gamble, but it paid off big time with one of the funniest programmes ever to grace the airwaves.

Although I never really got into Cheers, and felt that Seinfeld was about as funny as a heart-attack, Frasier is one of the few comedies I enjoyed from the moment I first saw it. The beauty of Frasier is that the scripts are so wickedly clever and the jokes, especially the visual gags, hilarious. You only have to watch the scenes with Niles and Daphne to realise just how good the scripts and cast members are. However, the thing that makes Frasier shine brighter that any other comedy is its timing and the fact that the entire cast gel together perfectly from show one. It's just sheer class, and it shows with its awards and accolades. In its ten year run the show has won a record thirty Emmys whilst Kelsey Grammer bagged the Outstanding Lead Actor in a Comedy Series award.

If you like comedy then you've really got to get yourself this disc set. Not only do you get over nine hours of classic comedy it's at such a bargain price you'd be mad to pass it by. Let's just hope that, like Friends, the price of the subsequent releases doesn't go through the roof. Roll on the season two DVD set.