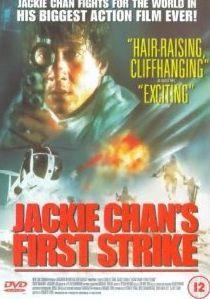 Jackie tracks the culprit, who turns out to be a rogue CIA agent, but unfortunately for Jackie, things aren't so simple. Along the way he is framed for murder, attacked and assaulted. He falls into freezing lakes, gets shot at and generally kicked about.

If you're wondering where the rest of the description of the film is, then wonder no more...that's it folks, yup, a paper thin plot that's so thin, it actually doesn't exist! Still, that's not what Jackie Chan films are about, they're really about great, often amusing action and amazing stunts (which Chan does all himself). You can only look on and marvel at the way Chan uses everything around him to defend himself, which includes a pair of step ladders! In my opinion, this is Chan's best film to date, just bettering the more mainstream Rush Hour but only because Chan does what he is best at in First Strike...Working alone.

The picture is average at best but since this is not the most high profile film this can probably be excused, the bitrate is a little on the low side as well causing the odd bit of outlining, but I actually couldn't see much in the way of artifacting.

Sound is a bit on the pathetic side, being in Pro-Logic only the separation is poor, as is the use of surround in general. Pro-Logic encoding was actually a trait of Entertainment In Video's first releases, which included The Long Kiss Goodnight amongst others, but its a trait which has happily been eradicated on EIV's later releases.

The extras don't exist and even more annoyingly, there are only six chapters, yes, you read it right, a measly six chapters. This is an abomination when you consider the number of excellent stunts performed by Chan throughout the film, making them difficult to find, necessitating much fast forwarding and usually cursing!

The short playing time is another bugbear, okay I have said that there is no plot, but hey, just fill another ten minutes with stunts! One thing to note for those who have never seen a Chan film before, watch the end credits because there are lots of excellent and often funny outtakes.

To sum up, don't buy this for the picture, or the sound, just buy it if you like great action films. Its certainly a good starting point if you've never seen a Jackie Chan film before and I'll guarantee you'll want more once you've seen this.