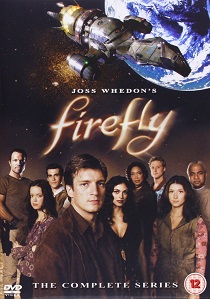 Captain Malcolm 'Mal' Reynolds is one of the defeated 'brown coat' soldiers and as the owner of Serenity, a small and ageing transport spaceship that doesn't have a planet to call home. Mal will take on any job, such as smuggling, stealing and conducting illegal salvage operations, to stay afloat and keep his crew fed. Mal is perfectly suited to this new "wild west" and nothing makes him happier that a shoot out or a good old punch up in a bar. Mal and his faithful crew must keep their wits about them at all times as they battle the many crooks and con artists that plough their trade on the many terraformed planets that millions of earth colonists call home.

Zoë was one of Mal's loyal comrades during the war and she serves on board Serenity along with her pilot husband, Wash. She is a serious and dedicated to the job as Mal and she'll be just as likely to end up in a bar brawl or gun fight.. Zoë is one of the few people that Mal trusts implicitly and, likewise, she would follow Mal into battle, no questions asked.

Ship's engineer Kaylee is the sort of person that Mr. Scott of the Starship Enterprise would dearly love to have on his watch. Kaylee is totally dedicated to her job and she manages to remain cheerful and upbeat even when parts of the ship are falling apart around her. Serenity would be lost without her golden touch.

Inara is the shockingly attractive ships ambassador. A 'companion' by trade she rents a one of the two shuttles from Mal and travels everywhere with Serenity. As a high priced prostitute she maintains her privacy and space on the shuttle vigorously and only ever takes on the clients of the highest class, or deepest pockets. She won't tolerate any of the crew, especially Mal, entering her shuttle uninvited. With prostitution legal, and her choice of career highly regarded on most planets, Inara is a very important part of the crew. Although Mal and Inara's relationship is rocky at the best of times, there's something simmering beneath the surface and Mal's protective nature surely hides his true feelings.

Janye is a loyal and highly effective mercenary soldier and he'll always be on hand when there's a fight to be won. However, he and Mal don't get along and he's only onboard Serenity until a better better deal comes along, and when it does, he'd betray the crew in a drop of a ten gallon hat.

Although Serenity is a cargo ship Mal is always more than happy to accept passengers to make ends meet. But sometimes passengers become crew and Serenity has just acquired another three new members. Dr. Simon often disagrees with the Captain's decisions, sighting them as dangerous or totally unnecessary, but his skills as a doctor make him a valuable addition to the crew. However, together with his extremely intelligent, but deeply disturbed sister River, they are on the run from the Alliance. They're not the best people to have on board when an Alliance patrol comes knocking on the airlock, but they do have their uses.

Finally, no crew would be complete without a priest. Another passenger come permanent member of the crew, Book (or Shepard as he's more commonly known) is much wiser and more cautious in his approach to the many sticky situations Mal and Serenity find themselves in. Much to the annoyance of Mal, he'll take every opportunity to spread the word of God and occasionally his gently-gently approach gets them into even more trouble. He's the sort of person who requires introducing to the vacuum of space without the aid of a spacesuit.

The series was filmed in widescreen from the beginning and as a result it is presented in a reasonable 1.78:1 anamorphic widescreen. For a television series it has a fairly good transfer with a high bit-rate throughout and a good level of detail and depth. The CGI effects look particularly effective, especially the spacecraft in deep space, although one of its biggest problems is with the usual NTSC to PAL conversion - the red colour balance. This becomes apparent in any scenes that contains larges amounts of red where bleeding can become a bit of a problem whilst the brightly lit outdoor scenes can occasionally highlight problems with grain. Fortunately, these problems don't occur all that often so it isn't too much of a distraction.

The sound is a bit of a mixed bag erring on the side of poor. Although it could be because they were lower bit-rate preview discs, at times the dialogue was extremely distorted. In fact for the first ten minutes of the pilot episode I thought one of the crew was either an android or had an electronic voice. However, when the entire crew starting talking like robots it soon became apparent there was a problem with the audio.

And with it being a television series there is very little scope for anything in the way of dynamic sound effects. There is the occasional use of the surround channel, but it is nothing spectacular. It really deserves something better, especially for all of the rumbling spacecraft effects, but the tame bandwidth available for the television broadcasts rules this out. Let's just hope something better materialises in the big screen presentation.

Each of the four discs come equipped with some nicely animated and scored menus. There seems to be a bit of an overkill on the animation side, but once its all over the menu choices are obvious and easily accessible with various language and other audio options clearly highlighted.

The 4-DVD set contains the complete series of 14 episodes as well as over 7 hours of extra features. Certain episodes also include some highly entertaining and informative commentaries by directors, producers, writers, costume designer and creator Joss Whedon. There is hardly a dull, or quiet moment, as everyone has plenty to say about the cast, the massive sets and costumes. And if that becomes all too much you can return to the main dialogue and read their commentaries via the subtitles. However, there is so much information being offered that the subtitles have a great deal of trouble keeping up! It's great to hear so much enthusiasm from everybody and they even took the series cancellation in good stead, even if I did detect a hint of bitterness in their comments.

The forth disc also contains a Making of featurette along with Serenity: The Tenth Character featurette. Creator Joss Whedon then offers a tour of the set whilst there's a gag reel, Alan Tudyk's audition and Joss Whedon singing the rather pleasant Firefly theme. Unfortunately I can't go into too much detail as I was not sent the fourth disc to preview. However, I enjoyed the series so much I'll probably purchase my own copy and I'll be able to pass comment on these extras at a later date. If anyone wishes to add their comments on the extras then please do drop me a line and I'll include them in this review.

With Emmy Award-nominated creator of Buffy the Vampire Slayer and Angel, series creator Joss Whedon had high hopes for Firefly. Unfortunately, he hadn't reckoned on the bigwigs at Twentieth Century Fox and when the series didn't draw in sufficient views it was unceremonially chopped with half of the series still unaired. Fortunately, this 4 disc DVD set contains all of the episodes, including the equally unaired pilot, along with a great set of extras that series fans are sure to lap up.

And having never heard a thing about the series I was a little apprehensive when I came the review copy of Firefly dropped through my letterbox. I needn't of worried as this series is rather good with some interesting storylines and a completely over the top and original series setting. Firefly is a real gem of a science fiction series and this DVD release is sure to increase interest in the series. After all, a western set in space and in a strange new future frontier? Get away, it'll never work. Trouble is, it really does!

It was a just shame it was cancelled, although the fact that the box-set is called The Complete Series doesn't make things sound that promising to the casual viewer. But there is a healthy fan base and although the series had a good following it was no where near enough to justify the production costs for the CGI effects, which in my opinion blast Star Trek out of the universe and give some big budget science fiction films a run for their money too.

Fortunately, as with Family Guy before it, there was enough rumpus in internet chat rooms and fan sites to get the ball rolling again. However, this time Firefly is returning to the big screen in a big budget remake. So if Joss Whedon can come up with a good enough script and attract a bigger audience the crew of Firefly hopefully find their way back to the small screen.