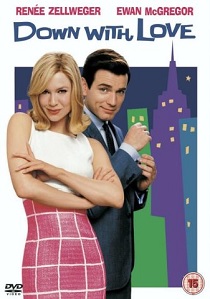 It's New York City during the swinging 60's. The men still dominate the bedroom and work place with women rightly kept in their place. However, the battle of the sexes is about to break out big style when best selling advice author Barbara Novak arrives in New York to publicise her new book 'Down with Love'. Desperate for some publicity in a male dominated market she approaches Know magazine in an attempt to get an interview from hotshot journalist, ladies man and playboy, Catcher Block. But with Catcher constantly putting her off in order to meet with his many ladies she finally gets a television appearance and the book takes the world by storm.

To the horror of the entire male population it doesn't take long for women to quit their mundane secretarial jobs and substitute chocolate for sex in order to prevent adoration and passion obscuring their minds and ambition. With women no longer swooning at his feet Catcher Block's lifestyle has been drastically changed by this dastardly feminism. It leaves him with no other choice but to bring Barbara Novak down by discrediting her feminist theory by tricking her into falling in love with him. It's time to put his playboy lifestyle to one side and con his way into Barbara's heart before bringing her crashing back down to earth in an exclusive expose in Know magazine.

With the film essentially a homage to the movies of the period the colours are extremely rich and wonderfully over saturated in a way only Technicolor could manage. With these amounts of colour on show it could be nightmare of a problem for colour bleeding and over saturation. Fortunately things have been carefully controlled and there are no signs of either problem. This results in a wonderful array of colourful costumes, sets and extremely impressive CGI background effects which blend in seamlessly. It even surpasses the superb costumes and sets of Catch Me If You Can.

With all of this colouration being a deliberate ploy of the film the picture detail and contrast levels can be a little on the unpredictable side whilst the bit-rate remains above average throughout with no signs of artifacting or outlining. As to be expected for a recent theatrical release, the picture is free from dust scratches and other picture imperfections. Mind you, I would have thought that this would have been the ideal opportunity to introduce some deliberate print scratches to give the film a bit more of an authentic look.

Whilst the picture is impressive the sound is a bit of a disappointment. You could always argue that they are attempting to retain the 1960's feel to the film by not bothering with a dynamic soundtrack, but that would have to be a poor excuse. Although the dialogue is crisp and clear in the centre channel the other channels are rather underused whilst the front channels are rather unimaginative. However, you can't really go expecting too much from a film of this genre and whilst it is a bit of a let-down it still manages to be functional.

The main menu is pleasantly animated and scored with various characters and objects flying around the screen in a fairly long animated sequence. It certainly remains me of those 1960's films and sitcoms and whoever designed it wants a hearty pat on the back. There is a nice collection of extras on offer with the highlight being the extremely informative and interesting audio commentary from director Peyton Reed. Although a lot of the information is reproduced in the many featurettes it is still helpful to be able to see what he was talking about during filming and post production.

The six short behind the scenes documentaries raise the slight suspicion of padding out the extras, but things are saved by the fact that each one is as interesting and enlightening as the other. Lasting a total of around 15 minutes the documentaries On location, Creating the world, The costumes, The Swingin' sounds, Down with Love, Up with Tony Randall and Split Decisions cover pretty much every facet of the film from creating the CGI effects to the musical score. You can view each documentary individually or watch the lot one go. There is also an HBO Special which, although offering some new information, is essentially a rehash of the other documentaries. Even the hair and wardrobe featurette is surprisingly interesting.

Blooper reels usually contain unfunny scenes of actors either swearing or falling about laughing. However, this montage has quite a few funny moments with the best bits being any outtake containing the extremely neurotic David Hyde Pierce. After seeing him get wound up and really angry with himself it really made me wonder what life was like on the set of Frasier. Also included are five deleted scenes with director Peyton Reed supplying an optional and extremely interesting commentary. I always find audio commentaries on deleted scenes a welcome addition as rather than just having a collection of nondescript scenes the director can offer his reasons for the cuts.

With a 60's film never really complete without some form of musical number it was sad to see that both Ewan McGregor and Renée Zellweger didn't provide a song. After all, their respective performances in Moulin Rouge and Chicago more than proved they could actually sing. Fortunately, the closing credits provide a tune whilst a music video is available in the extras (although it looked to me that Renée Zellweger was miming). The extras are rounded off with 'television footage' of Barbara Novak as seen in the film.

Down With Love makes no attempt to to hide the fact that it is paying homage to the many Doris Day/Rock Hudson bedroom comedies of the time. I particularly liked the use of the split screen to create a number compromising positions and resulting sexual innuendo. The visual effects are just as impressive with the set on the Universal back lot blending in perfectly with a CGI generated New York whilst the rear projection backgrounds when travelling in taxi cabs (even using the same footage from films of the era) are just enough to fool you whilst looking obvious. A very nice touch indeed.

Overall I found Down With Love a little annoying at times and not actually that funny. Sure, people harking back to the good old days of Hollywood or fans of this sort of genre will be more than happy with the results, but I suspect that many will not be that impressed. And judging by the below par box-set office results I suspect that my later observations are a truer reflection of its sell through prospects. However, this film and disc is saved by the extremely interesting set of extras and the fact that films of this style nearly always do better on DVD than their original theatrical release.

Whilst I don't recommend Down With Love as a top priority purchase for your collection, the audio commentary and an unexpected twist in the tale certainly makes it worth considering for a rental.