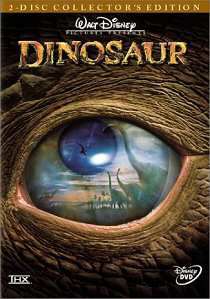 65 millions years ago, and during an attack by a predator, an egg of an Iguanodon was separated from its nest. With an egg being an ideal meal for a dinosaur, it soon began a journey in the mouths of many dinosaurs before finally being dropped into a dense forest populated by a clan of lemurs.

When the egg hatches, the young Iguanodon is adopted and raised by the lemurs and soon becomes an integral part of the family. However, paradise is interrupted when a devastating meteor shower plunges their world into a scorching wasteland. Forced to abandon the forest, he and the members of his lemur family travel to the mainland where they join a group of migrating dinosaurs desperately searching for their safe nesting grounds.

With the film created directly from a digital source you would expect a picture of the highest standard, and indeed, this is what we have here. The picture quality is simply stunning, with an incredible amount of detail in the CGI dinosaurs, so much so that you'll be hard pushed to realise that the dinosaurs have been extinct for millions of years. The masses of colours are handled perfectly without a single pixel out of place, and although the bit-rate fluctuates wildly, there is no degradation in the picture quality. Demonstration material for sure!

The sound is good, although it is not quite as good as it could, and should, have been. Although the dialogue was impressively clear in the centre channel, along with some fairly good use of the surround channels, the area I expected it to shine the most was with the subwoofer. Even though LFE's were present in the soundtrack, rather than being the expected dinosaur room shakers, they were more like tip-toeing dinosaurs.

With the welcome dual Dolby Digital and DTS soundtrack on the disc you'll be in dinosaur heaven, but it somehow lacked that explosive edge which Jurassic park provided so well. Perhaps I was expecting too much from the audio, although I suspect that the sound was toned down for the benefit of the younger cinema audience. Although there's not much to split the two competing formats, yet again, the DTS soundtrack wins because of its awesome channel separation.

The menus are pleasantly animated and scored and it is easy to navigate your way through the many menus which is especially important with the large number of extras. As with the Toy Story special editions, the special edition also comes with a much needed navigation map for the second disc. The many extras include a number of games and facts to keep the youngsters happy, whilst the directors commentaries and featurettes will keep the big kids happy.

Although there as plenty of extras on the first disc, the special edition has a second disc which is literally bulging with more extras than you could shake a stick at. Although the extras on the first disc differ on each version of the disc, with the single disc version containing a full screen version of the film, it is really worth giving up the full screen version and paying the extra money for the special edition.

It also makes a change for Disney to touch more on the daily life and death struggle which modern day animals have to do. It was very poignant to see Aladar's determination to help the old dinosaurs survive, whist you were never far away from the causalities of the mass exodus.

There is also plenty of violence in this film, perhaps too much for a younger audience, although anything seems to go when it comes to dinosaur films. There was plenty hostility between the dinosaurs in the herd along with brutal, and graphic, attacks by carnotaurs stalking the group. It certainly made a change for the hunters to be something other than the T-rex, and something which the creators were keen to do.

Although the story line is a little lame to say the least, with it looking suspiciously like a prehistoric Lion King, it is the brilliance of the CGI animation and masses of extras which make this disc so attractive. For a relativity cheap price by Disney standards, it becomes even more of a bargain and results in it becoming a must have disc.